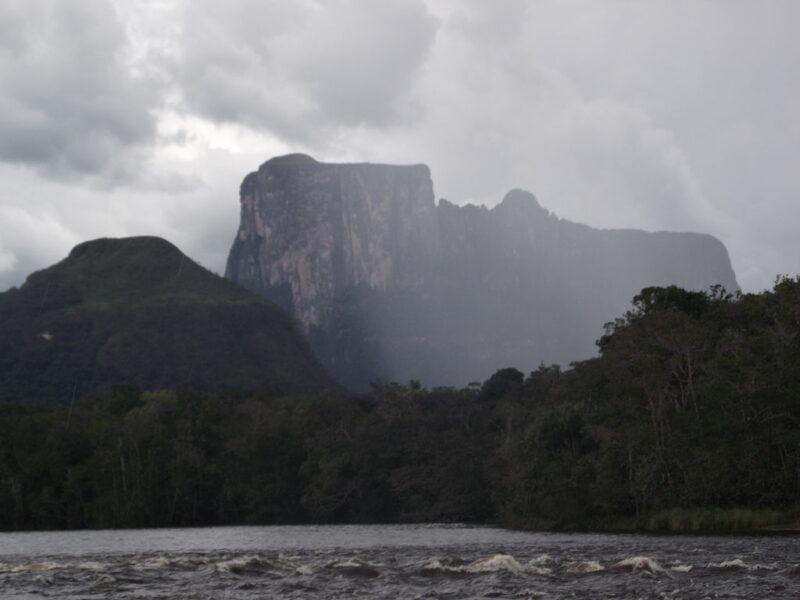 Contrary to cosmogonic (or creation) myths, eschatological mythsnarrate the end of the world, or the end of an era, having in common the destructive and deadly aspect of an event that forever truncates the destiny of a people or civilization. One of these stories that is repeated in almost all cultures speaks of a great Flood that wipes out everything and from which only a select few survive. Many of us are familiar with the Noah’s Ark version of the Hebrew Bible, but few of us have heard the Amazon version.

Water, in its different forms, is present in the evolutionary process of planet Earth and in its conformation. Water accounts for about 97.84% of the planet’s total volume. Water is everywhere: in the form of oceans (97.2%), glaciers and ice caps (1.8%), groundwater (0.9%), and the remaining 0.02% is inland seas, lakes and rivers. It is a common belief that there is a large amount of fresh water, present in rivers, but its proportion is almost negligible in relation to the total volume: 0.0001 %.

Water is present on the planet in solid form, as in the polar ice caps and glaciers; gaseous, in the atmosphere, as water vapor and clouds; and liquid, in groundwater, lakes and rivers, and even as “green” water, contained in the biomass of plants and other living beings, such as animals and humans.

Where did the water come from?

One theory, which now loses validity, is that water was brought to Earth by millions of asteroids in the form of 80% water ice. Another theory, increasingly accepted, postulates that the water was there, in the different layers that enveloped the Earth when it was forming, 3.4 to 4.5 billion years ago.

Water everywhere, so it should not surprise us that human beings have persistently resorted to the use of myths or narratives to express our ancestral ideas about the origin of the world, such as the great floods, which took shape under the name of the Universal Flood!

The Flood in 5 different civilizations

Among Christians, the legend of the Universal Flood appears in Genesis, the first book of the Bible, a divine action to punish human wickedness. The only one warned was Noah and his family, who built an ark, in which he and his family and some animals embarked. After a persistent rain that lasted 40 days straight, the earth was flooded and all living creatures perished, except those on the ark, which ran aground on Mount Ararat. The fact has been investigated by archaeologists and geologists, without finding conclusive evidence. Two marine geologists, William Ryan and Walter Pitman, noted in their book “Noah’s Flood” that the event probably occurred 7,500 years ago in the Black Sea, then a large freshwater lake, although smaller in extent than today’s sea.

Events similar to the Universal Flood appear in almost all the mythologies of mankind.

The deluge in pre-Hispanic American mythologies

In American mythology we find the myth repeated in many legends, especially in South America, both Andean and Amazonian.

Among them, the Inca myth in which Viracocha destroyed the giants causing an enormous flood, from which only Manco Capac and Mama Ocllo survived, stands out. Manco Capa was the mythological founder of the Inca culture in Cuzco, and Mama Ocllo his sister and consort.

The same Flood myth, with variations, is found in many Caribbean and South American mythologies, such as in the Taino culture of the Caribbean, the Guarani, the Kawesqar of Tierra del Fuego, the Rapa Nui of Easter Island, and so on, in numerous Amazonian mythologies.

The deluge in Amazonian mythology

Among the Amazonian ones, one of the most elaborate is that of the kanpopiyapi, or chayahuita. The Kanpopiyapi, of the Jéberos group, who live in the Loreto region of Peru, on the left bank of the Huallaga River, one of the tributaries of the Marañón River, which in turn forms part of the great Amazon River.

In the Chayahuita myth, analyzed in detail by Ochoa Siguas (1992) to study its implications with the sexual division of labor within the indigenous family, the only survivor was Konpanama, who saved himself by climbing a large mountain, and then, in this one, a tall tree, a double ascent. Konpanama was later joined by two macaws or parrots, which later became females, or rather parrot-women. In the end, the procreating couple is formed by two twin brothers or twins, an idea that is repeated in many Amazonian legends about the flood.

The same legend with other names

In some Brazilian Amazonian myths the twins are called Ariconte and Tamendonare. In others they are called Cusicayo and Atauropagui, as among the Ecuadorian Cañari. In other myths they lack concrete names, and are simply called the twins, or older brother and younger brother, as in the Chayahuita myth, to which we will refer.

Ochoa Siguas (1992) analyzes two versions of the myth in question.

In the first version, Konpanama survives by climbing a high mountain. But as the flood grows, he climbs a tall tree, in this case a sapote (Manilkara zapota), a tropical fruit tree probably native to Central America, and common in Central America, northern South America and the Caribbean. The double ascent, hill-tree, symbolizes in the myth the ascent to heaven. These two heights represent the terrestrial world of humans and the celestial world of divinities. That is, the end and the beginning of humanity.

Several phases can be distinguished: that of darkness, since there was no light or sun. Although there was a tree, evidence of the existence of sun and photosynthesis. Another phase describes the arrival of two birds, which perch in the tree, while dawn appears and light returns to the world. In the third phase, the two brothers, who had also been saved from the flood, appear. In Chayahuita mythology, the twins have the ability to divine (ninotonanpin) good and bad deeds.

To eliminate the prediction referring to bad deeds, the twins are given to drink a masato from cassava (huino), mixed with sweet potato (Ipomoea batatas). The twins dream of having a woman to prepare the masato or huino, an essential drink in all Amazonian rituals, and whose preparation is a female task. In the fourth phase appear the two loras who, in the intimacy of the home, become women, secretly engaged in the processing of huino and the spinning of cotton. But one of the brothers returns unexpectedly to the house and discovers the parrot-women, who flee in fear and disappear forever, symbolizing the male transgression of the female ritual of the onset of puberty (in which pubescent girls are isolated to learn trades). Konpanama is angered by the transgression and turns the reckless boy into a woman, breaking his intention to unite the two brothers with the two loro-women to ensure the creation of offspring. The male-female sex change takes place when a spider bites the brother’s penis. His penis is amputated to turn it into a vagina. Then the offspring of humans are produced.

The other version of the Chayahuita myth of the universal flood presents some important variations: From the beginning, three characters, Konpanama and the two twins, are saved by climbing a tree on the hill. The food they eat is the sachapapa(Dioscorea trifida), a tropical tuber that grows underground (symbolizing darkness), abundant in the Amazon, which is part of the basic Chayahuita diet. The sex transformation is produced by a piece of clay that falls on the penis of the younger brother, transforming it into a vagina. A white monkey (ahui) teaches the couple how to have sex. In this case, the monkey represents the symbol of sexual liberation.

The Origin of the Cañaris. (2020, August 24). Legends of Ecuador. https://leyendasdeecuador.club/el-origen-de-los-canaris/

OCHOA SIGUAS, N. (1992). The flood myth and the creation of sexual division among the Kanpopiyapi of the Peruvian Amazon. Journal de la Société des américanistes, 78(2), 163-180. HTML