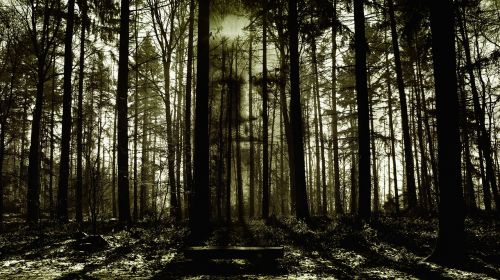 The Amazon is an almost impenetrable jungle , due to its great thickness. Sometimes she is overcome by a great silence.

You can barely hear birds singing, monkeys howling, and strange noises coming from far away.

In the humid heat, and escorted by the buzzing of mosquitoes, one can fall into despair if one is not familiar with jungle life.

And if you have heard the terrifying legends of the Amazon, you can easily be overcome with fear. To the dry branch that falls, to the sound of the waters, to an unrecognizable dry noise.

The Amazon basin is full of mysteries that are fed by the legends that people repeat in the settlers’ camps and in the homes of the native indigenous communities.

Suddenly, the chullachaqui, a fantastic creature recognizable only by its goat’s foot and cruel to its victims, emerges from the forest.

Or the fearsome tunchi that roams the jungle at night, luring its victims with its shrill whistle, which becomes shriller the closer it gets to its victims.

The most terrible demons of the jungle are the chullachaqui, the tunchi and the mapinguarí.

The chullachaqui or shapingo is an ugly-looking creature with one large foot and one small foot, one like a goat’s foot.

The indigenous people recognize him by the imprint of his uneven feet.

It emits sounds that imitate the song of a bird or the bellowing of an animal.

He can be shot at point-blank range without wounding him.

And it is the owner of the animals, who punishes those who violate his law, hunting without asking his permission, or punishing those who hunt in excess, depredating the species of the forest.

The tunchi or maligno is a soul in pain, which emits a whistling sound similar to the lament of the person who is dying, like the sound that air makes when passing strongly through a narrow tube.

The tunchi appears when someone passes away, remembering them, retracing their steps. Many consider it a nocturnal bird reminiscent of aimless and restless souls.

The mapinguarí is a hairy giant, like a large monkey, with a single eye in the middle of its forehead and a mouth so big that it reaches its navel.

It walks in the daytime, screams like a person and gives off a nauseating odor.

Wherever it passes, it breaks dry branches and knocks down trees, to the point that it can be said to symbolize destructive deforestation . Just fear the lazy bear.

But there are others, many fantastic beings in the Amazon jungle.

Other beings of legends

Like the curupirá, protector of the forest and that chases those who deforest it, and that cannot be followed because it walks with its feet upside down, and moves away seeming to approach.

And there are also fabulous beings that live in the deep waters of the rivers.

Like the yacuruna, which seduces young girls and makes them disappear at the bottom of the waters.

Or like the yacumama, a gigantic anaconda , mother of the water and protector of the Amazon River.

Another well-known Amazonian legend is the pink dolphin or bufeo colorado that transforms into a seductive man at night, and conquers beautiful women to take them to the river.

There is also talk of a ghost ship plying the waters of the great rivers, manned by buffaloes, which lures sailors into the whirlpools to make them shipwrecked.

The IWIA: indigenous soldiers turned into another legend of terror

As a projection of those fantastic legends of terror, some so terrible that they instill much fear in the solitude of the Amazon jungle, groups of indigenous soldiers have been created who walk through the jungle without being warned by their enemies.

His motto is “When a leaf falls in the jungle the eagle sees it, the snake feels it and the tiger sniffs it. The iwia soldier sees it, feels it and smells it.”

The Iwia are elite indigenous combat groups, specialized in jungle warfare, who blend into the foliage, walk noiselessly and leave few traces in their wake.

When you notice them, it is because they are on top of you, slitting your throat.

Or suddenly, without knowing where it came from, you feel in your body the piercing heat of its poisoned arrow.

In 1942, the Rio de Janeiro Protocol was agreed upon, which delimited the borders between Ecuador and Peru.

But Ecuador has always questioned this protocol, considering it unfair.

And from time to time conflicts are reborn. During the so-called Alto Cenepa war in 1995, the armies of these two countries clashed.

When the border demarcation was made, some indigenous groups were sectioned off.

This was the case of the Shuar, an extensive and indomitable indigenous Amazonian ethnic group that lived between Ecuador and Peru, without recognizing borders. With the agreement they were separated.

In the early 1990s a select group of Shuar Indians joined the Ecuadorian army to serve as scouting guides and train them on how to conduct themselves in the jungle.

It is the command Iwia, a word that translates as demon.

The Iwia are the armed demons of the jungle, who move swiftly through the thicket without leaving a trace and blend in with the undergrowth like chameleons.

The legends of terror of the Amazon jungle are not only indigenous squads fearsome in combat, but also fantastic beings created by horror films, such as the great anaconda, in its different versions, or recreated by literature such as the stories of Peruvian Ciro Alegría (1909-1967) or that inspire video games like the one in which the Amazon jungle is crossed, dodging dangers, in search of the tunchi.