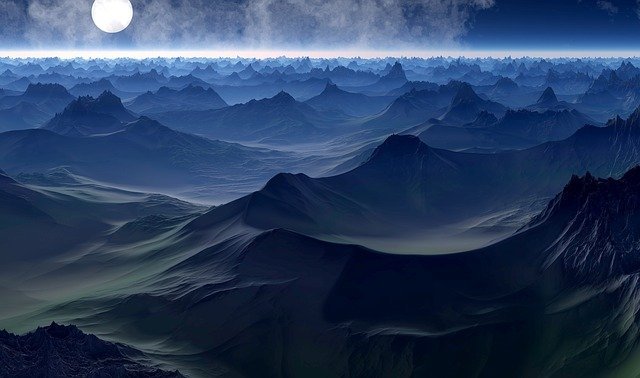 The cosmogonic myths or fables about the birth of the world, and in particular of the sun and night, are very beautiful. Here we share with you 4 Egyptian, Greek, Aztec and Amazonian cosmogonic myths.

According to Egyptian mythology, before everything else there were immense masses of murky waters covered by darkness.

There was no sky, no night, no earth. There was only the primordial ocean Nun. From there Ra, the Sun, was born, and he created from his breath the wind (Shu), and from his saliva the moisture (Tefnut). Shu and Tefnut had two sons: Geb, the god of Earth, and Nut, the goddess of Heaven. And then Geb and Nut procreated their own children….

According to Greek mythology, Chaos reigned at the beginning of time. From there arose the primordial gods, who in turn created the rest of the gods.

From the copulation of Nix and his brother Erebus were begotten Ether (the brightness of the day) and Hera (the day).

Nix, the goddess of the night, was represented as a winged woman dressed in a black cloak covered with stars. She was transported in a horse-drawn carriage and was always accompanied by Thanatos and Hypnos.

For the ancient Mexicans at the beginning there was only darkness and nothing could be seen. The most powerful gods gathered to create the Sun and illuminate the Earth. In the celestial city of Teotihuacan they lit a huge bonfire.

Whoever jumped over it would become the Sun. Only two candidates were presented. One was beautiful, opulent and wealthy. The other was ugly, weak and poor. The rich man tried to jump, but he was afraid and ran away. The ugly one took courage, jumped over the bonfire and became the Sun.

In the distance, the beautiful one saw the clarity and was ashamed of his cowardice. He returned and jumped the bonfire, and a second Sun arose.

But there could not be two suns on Earth. And the mighty ones extinguished the second Sun, which became the Moon.

✅ Amazonian cosmogonic myth: the birth of the night

The Amazonian legend of the birth of the night is as beautiful as the others.

At the beginning of time there was only clarity, light, day. There was no darkness.

The night was kept at the bottom of the waters, in the care of the Big Cobra, Boiúna or Yacumama .

One day Cobra Grande’s daughter told her husband that she wanted to know the night.

Emissaries of her husband went to where Cobra Grande lived, conveying to him the wish of his beloved daughter.

Cobra Grande handed them a coconut nut containing the night, asking them not to open it on the way.

On their way home, the emissaries heard strange noises coming from the coconut. They were like the songs of crickets and night birds.

They could not stand the curiosity and opened it, and the night escaped, darkening the whole Earth.

Then, the daughter of Cobra Grande plucked a long strand of hair from her luxuriant head of hair to divide the thick darkness into two halves.

One was the night, separated from the sun. The other was the light of the resurrected day.

There are many other beautiful cosmogonic myths. One of them is the Great Amazonian Legend of the creation of the Universe.

Shaman and shamanism in the Amazon: mediator between two worlds, animal connection, and with nature, master plants, indigenous culture