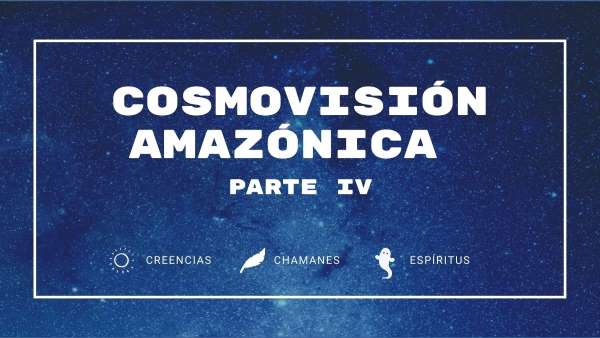 Another form of mediation between human beings and Amazonian nature, different from the one personalized by the shaman, it is through the responsible tutelary deities, or “owners”, of the animals, the plants, the water and the fishes, the forest and the wild animals, etc., which are indicated in the different Amazonian cosmovisions.

In this section I will refer to this aspect of the prevailing worldview in a few representative ethnic groups from four Amazonian countries, Bolivia, Colombia, Ecuador and Peru, and to the relationship that these indigenous communities have, by inheritance or direct learning, with the natural environment. that they inhabit

It should be noted that indigenous societies increasingly receive cultural influence from urban societies, those from “outside”, with their processes of cultural assimilation.

Influences ranging from the penetration systems of religious movements, official school systems and the media with their incitement to the consumption of goods and services, which present lifestyles different from the one prevailing in a native Amazonian indigenous community.

Amazonian indigenous peoples have been deeply penetrated by Western society since the times of conquest and colonization. Later, they were greatly influenced by the practices of the missionsthat created indigenous reservations for better control and evangelization.

In the Bolivian Amazon there are 29 indigenous peoples that differ from each other, more than by their cultural practices, by the size of their population, their territory and by the degree of penetration of the society located outside the Amazon.

The three most important indigenous groups in number are: mojo or moxo, movima and chimane or tsimane.

All Bolivian Amazonian societies, including others such as the Tacana, Moré or Chiquitanía, are societies that practice animism, share the belief in the existence of supernatural beings, of the afterlife, of the cult of the dead, and of living beings. masters or owners of nature.

The 3 spheres of the world in the Bolivian indigenous cosmovision

They generally believe that the world, created by mythical beings, is divided into three spheres: the upper one (where the archetypes of all living beings dwell: animals, plants and humans with domestic objects, represented by the constellations) , the terrestrial (inhabited by man, plants and animals, along with the main deities and the mountains or sacred places) and the one below (occupied by death, disease and everything harmful). In almost all ethnic groups they worship the jaguarand the snake.

The most numerous town, almost 20,000 people, is the mojo or moxo, which inhabits the department of Beni, between the Río Grande and Mamoré rivers.

They believe in the afterlife, and worship the dead. They worship many nature deities. The most important is the jaguar. They believe they are children of the forest, river or lake near their settlement, which they consider sacred places.

There are owners or lords of nature who are responsible for water, animals or trees, and who are asked for permission to use them. Existen dueños o señores de la naturaleza que son responsables del agua, del animal o de los árboles, y a los que se pide permiso para usarlos.

In the Colombian Amazon there are more than 50 Amazonian indigenous peoples, comprising about 70,000 indigenous people, grouped into about 10 linguistic families. Most are located in the southeastern part, in the departments of Amazonas, Guainía and Vaupés.

They are located in many areas: in the basins of the Caquetá and Putumayo rivers, in the foothills, in the Guaviare, in the Vaupés, in the Caquetá and Apaporis, and in the Amazonian Trapeze. All of them have been subjected to large territorial displacements, in the exploitation of the rubber era, around 1900-1910, and more recently due to drug-trafficking violence and pressure from ranchers.

In these groups, relationships with nature are based on established norms that seek to maintain a certain dynamic balance of the surrounding energy between the different beings of the world (Reichel-Dussan 1988).

The groups are located in ancestral territories that were assigned by the Creator, Father Sun, who created plants and animals, and assigned to each species a series of rules of conduct, which he placed under the care of certain spirits or owners.

The owners of nature

The groups are responsible for that territory, including the animals, plants and minerals that, in turn, have their own “owners”, who are called “owners of nature”, to differentiate them from the shamans or curacas who negotiate with them the control and good use of the assigned resources (Reichel-Dolmatoff 1997).

The shaman visits these “ecosystems”, physically and spiritually, to update his accounting system and monitor exchanges, taking on the appearance, depending on the habitat visited, of a jaguar, a caiman, a boa, to negotiate with the “owner of nature” (Reichel-Dussan 1988).

The balance of society, in the fundamental activities of indigenous survival (hunting, fishing, farming, gathering) are determined by compliance with the rules responsible for the balance between society and nature.

At first, plants and animals were human beings, but they ceased to be for breaking the rules, disobeying the elders. In addition, non-compliance, derived from misuse or abuse, can be sanctioned with shortages, floods, droughts, diseases (Van der Hammen 1991; Castaño-Campos 1997; Acosta, Mendoza 2006; Patiño-Suaza, Sandín-Vásquez 2014; Sanabria -Diago, Argueta-Villamar 2015).

For Reichel-Dolmatoff (1997) it provides a set of ecological principles, an “ecological survival system”, based on social and economic rules of high adaptive value, which are transmitted intergenerationally to maintain a viable balance between environmental resources and the needs of society.

The social order of the Shuarand the Achuarhas egalitarian and hierarchical components, but is not stratified. Social status is not inherited, and depends on the functions of each sex, age, knowledge and personal efforts (Mader 1999: 37).

The 3 worlds of the Shuar

The Shuar divide the universe into three worlds: the one above (the sky, nayaimp, where the immaterial and invisible reality is), the world here (made up of both realities, the visible and the invisible, where they live etsa, tsunki, never and never init) and the world below (an immaterial and invisible reality, abode of iwianch uunt, the king of demons, assisted by tungkuruá, which burns the spirits of bad people).

Every person is made up of a body (which returns to earth upon death) and a soul (which will undergo several transformations until it becomes a wampank: if it was good in life, it will go to a kind of paradise, but if it was bad, it will become a evil).

The fundamental principle of the entire cosmological framework of the Shuar is the arutam, the divine power that permeates the universe and the Shuar world.

The greatest divine being or maximum spiritual idea is the arutam, which inhabits the souls of humans, the deceased, spirits, plants and animals.

The arútamhas two forms: as an eternal superior being, which gives special strength to the Shuar man and protects him, or as wakán arútam, which corresponds to the spirit of the ancestors, and whose power is nourished by the eternal arútam.

The arútam manifests itself in the form of particular spirits or deities, which would correspond to the “owners”, each one in their own vital space and with their own aspect: etsa(the spirit of the sun, the good, which opposes to Iwia, the evil), tsunki (the spirit or owner of rivers and water), shakaim (the spirit of masculine work that gives him strength and skill, especially in the clearing to establish the chacra or chagra) and nunkui (the spirit of female work, the deity of the farm and crops, which represents the fertility of the earth and women), amasáng (who lives in the jungle and is the owner of the animals).

The beings of nature were human beings, but they lost their human form and their phonatory apparatus (and language), retaining some attributes, such as the life of consciousness and a sociability ordered according to the rules of the world of complete people.

Communication between human entities is based on amulets, nantar, and ánent, which are songs of great strength that express their messages through souls, animals and dreams. And it is mediated in its interpretation by the uwishin, witch or shaman (Original Peoples 2017; Arias-Gutiérrez, Herrera-Sorzano, González-Sousa 2016; Brammer de Rodríguez 2015; Plhakova 2010; Mader 1999; Descola 1998; Fuentes 1997; Delgado – Add 1986).