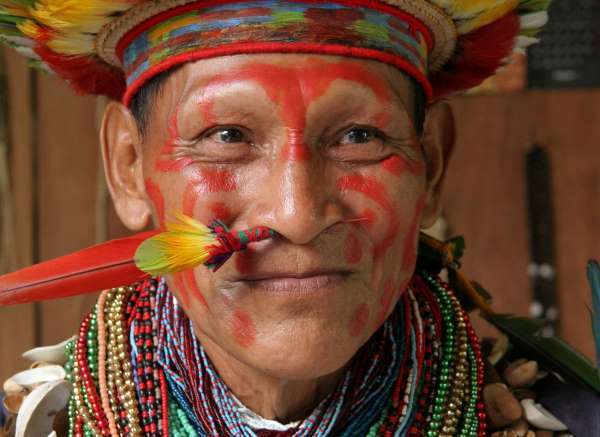 The shaman is the mediator between the two worlds, the spiritual or “other world” and the material or “this world”. He is in charge of promoting the links between the two.

Thus, the shaman goes from one world to the other, transforming himself into a jaguar or into other animals and beings capable of thought.

That gives the shaman a multiple presence and a plurifunctionality tucked inside a body (Wright 2013: 74).

The shaman, and the role he or she plays in a community, is part of an oral tradition developed over centuries by these people, who are the custodians of very special knowledge. All true shamans are alike, despite the existing differences in the languages they speak and the geography where they operate.

The shaman and the jaguar: two sides of the same coin

The shaman is united with the jaguar by the “humanity” they present (Viveiros de Castro 2013; Mazzoldi 2017; Reichel-Dolmatoff 1975).

In Amazonian thought, shaman-jaguar is a duality that does not dissolve, as happens in Western thought where the wolf is a “beast”, opposed to the human.

In the Amazonian cosmovision, at least for the Yanomami ethnic group in particular, “each being is its image and its ghost” (Kopenawa, Albert 2010).

When one sees the image of a jaguar, for example, what one sees is a human being, the original image.

The jaguar’s ghost, its mask, is the zoomorphic aspect, its way of being other, of living in the other world, where the transforming beings with the capacity to influence the eastern world dwell.

The jaguar has a double existence that unfolds into a ghost (shadow, carcass, body) and an image (spirit, soul, but also “chief” or “owner” of animal species).

In the “other world” the jaguar is a person, and in the “eastern world” it is a carcass, a shadow, with the body of an animal.

Humans who remain in the “eastern world” can only see the jaguar as a shadow, a carcass, with the body of an animal, reduced to its zoomorphic figure.

But shamans and other humans who have access to the “other world” will see the jaguar in its anthropomorphic aspect, as a person, as people, as a human.

Within this perspective, the jaguar talks, lives in a family, dances, sings, cultivates, like any human being.

And in turn, the jaguar, and the other animals, see the humans who remain in the “eastern world” as animals.

And they can only see them as human beings when they access the “other world”. It is the “perspectivism” of Viveiros de Castro (2003), which postulates that all beings, animals and plants, biotic and non-biotic, share, in the “other world”, the faculty of being persons, subject or human soul, differentiating their bodies or natures only in the “this world”.

The jaguar pairs with the shaman, his human colleague.

The jaguar is also a shaman, and even a master of shamans.

Both are actors in the territory, which is, according to Amazonian thought or cosmovision, a “portentously multiple and disseminated entity” (Mazzoldi 2017:45), composed of instances of action, immersed in networks of collaboration or disagreement.

The shamans who die in the “east world”, go to live in the “other world”, which is a more egalitarian world than the other.

Differences between a shaman and a chieftain

The case of the shaman is a good example of the egalitarianism that exists within an Amazonian community.

The shaman becomes a leader of the community, together with the political chief or cacique, mediating in the resolution of conflicts, helping in initiatives in search of social improvements for his community.

However, despite his contributions, the shaman does not accumulate power, goods or influence for personal benefit.

Always, after fulfilling his tenure, he returns to hunt and fish to get food for himself and his family like any other member of his community (Mazzoldi 2017; Winter 2017; Kopenawa, Albert 2010; Ochoa 2003).

In Amazonian societies, the relationship with mystical and mythical processes predominates over personal status, and chieftainship does not consist of exercising unilateral power over others (Goldman 2004: 55).

The Shaman and the master plants

In addition to healing, the shaman plays an important role in the functioning of society as a mediator between human beings and the spiritual sphere, using entheogenic substances such as yagé(ayahuasca) or coca, to access the “other world”.

The shaman visits these “ecosystems”, physically and spiritually, to update his accounting system and monitor the exchanges, taking the appearance, according to the habitat visited, of a jaguar, a caiman, a boa, to negotiate with the “owner of nature” (Reichel-Dussan 1988).

The ritual of ayahuasca ingestion materializes the visual contact with the jungle spirits, especially with the plants, which possess the knowledge and powers of the shaman (Chaumeil 1994: 267-274; Olortegui-Sáenz 2007).