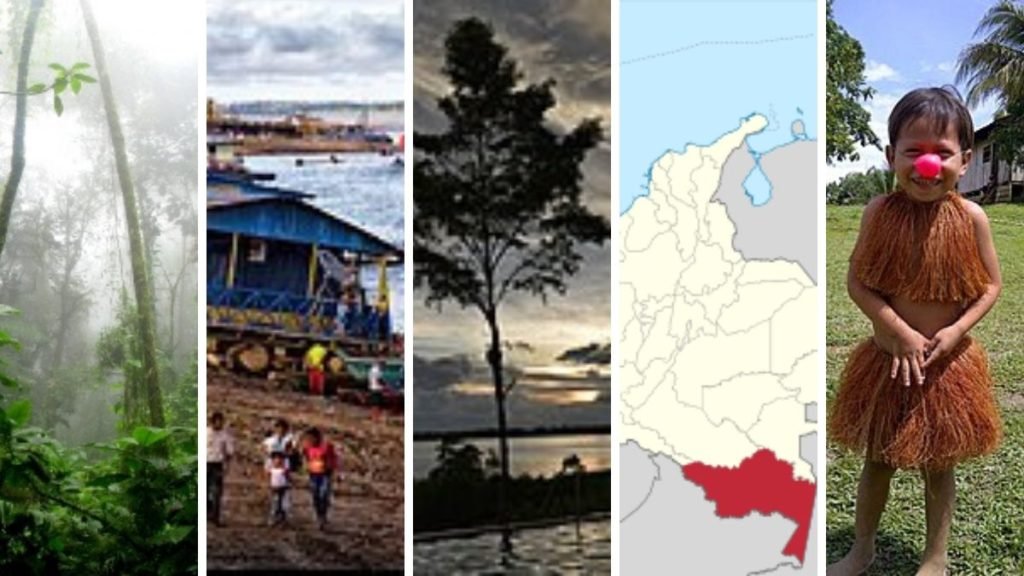 When we talk about the Colombian Amazon, we may be referring to two different geographical areas.

The political-administrative division, known as the Department of Amazonas, covers an area of 109,665 km2, which represents 9.6% of the total area of the national territory. Some 80,000 people live in the area, and the capital city is Leticia .

However, when we talk about the Colombian Amazon, we may also be referring to the Colombian Amazon Region (RAC) that covers more than a third of the country and represents approximately 5.52% of the hydrographic basin of the river Amazon. This area is dominated by tropical rainforest and has a relatively low population density of barely one million people. It also has one of the highest biodiversity indices in the world.

The Amazon Region of Colombia (RAC) includes not only the department of Amazonas but also the departments of Vichada, Guainía, Vaupés and Guaviare.

Tributaries of the Amazon River

Although the Amazon River crosses just 116 km of Colombian territory, there are many tributaries. The most important are the Guaviare, Guainía, Caquetá, Putumayo, Chingual (Aguarico), Vaupés, and Mecaya rivers.

The main rivers of the Colombian Amazon are the Guaviare, Guainía, Caquetá, Putumayo, Chingual, Vaupés, Mecaya, and Amazonas. This last runs only 116 km inside the Colombian territorty.

With regard to reptile species in South America, Colombia has the second largest number of turtle species and the greatest diversity of crocodiles or caimans.

Towards the end of the 20th century, approximately 79,000 indigenous people lived in the Colombian Amazon. They formed part of 58 indigenous communities. The  majority of these groups had a maximum of 500 people each and lived in the Department of Vaupés.

According to the Colombian National Administrative Department of Statistics (DANE) in 2007 there were 52 indigenous peoples in the Colombian Amazon.

Since the 1800s, the Colombian Amazon, like other Amazon regions, has been an important source of raw material for international markets.

First came the extraction of rubber , wild animal skins, and wood during the 19th century. Later came the exploitation of oil and coca which peaked in the 20th century.

The main source of protein for the people comes from 33 species of fish. Fishing is traditionally done with the use of barbasco .

The hunting of wild animals is a secondary activity. Due to limited food preservation methods in the most rural areas, captured animals are distributed among all the members of the community or delivered to neighboring communities. This sharing generates and strengthens ties or alliances.More recent economic activities include fish farming and tourism.

Tabatinga is a Brazilian city located in the extreme west of the Amazonas state of Brazil, on the left bank of the Solimões River and forms part of the shared border with Colombia and Peru located in the so-called Amazon Trapeze.

Puerto Nariño (Department of Amazonas – Colombia) where it is, map, geographical location, what to do, PHOTOS + VIDEO

Chiribiquete National Park: How to get there, indications, origin, maps, images, flora, fauna and cave paintings

You can enjoy various activities such as tree climbing, jungle walks, canopy, and navigating the Amazon River.

In addition, there are tours to observe the fauna and flora. Tours start at a river crossing where you can see the beautiful pink dolphins as well as the largest lotus flowers in the world (leaves measure up to a meter in diameter).

Other tourist packages may include sleeping in ancestral trees or sharing a day with the indigenous communities that live in the area.

Rivers provide fish which is often eaten with cassava, banana, and fruits such as copoazu and anon. Dishes are influenced by what can be extracted from the rivers.

The pirarucú, a fish that grows up to three meters, and yucca are common foods. Fish forms the basis of the Amazonian diet and is sought after by tourists.

The leftist guerrillas (ELN, FARC), and the subsequent paramilitarism, have displaced local people who seek sources of income to improve their quality of life. These military conflicts that have penetrated the Colombian Amazon are coupled with foreign conflicts and violence and backed by political ideologies.

The political conflicts most affect the northwestern region including the Departments of Caquetá, Guaviare, and Putumayo.

The southeastern regions of Guainía, Vaupés, Amazonas, Vichada and the rest of Caquetá, and Putumayo are more isolated. They are away from highways and less penetrable. Here the indigenous subsistence economy remains; however, this production generates little or no commercial surplus.

After the fall of the Soviet Union, the Colombian guerrilla movements needed alternative financing to purchase weapons and maintain of their troops. They   boosted the illicit coca cultivation in Amazonian lands that were under military control.

The increase in coca and cocaine production than began in the late 1980s brought about devastating consequences.

Fires multiplied, and there was extensive deforestation of jungle areas for the planting of illicit crops.

The Amazonian inhabitants were affected by the disintegration of their family unit; the prostitution of indigenous women; increased insecurity and violence, and an artificial market economy with extremely poor human development.

The most important city in the Colombian Amazon is Leticia. It is the capital of the Department of Amazonas, and it is located 1,085 km from Bogotá; however, there are no roads that connect it to the country’s capital.

Leticia is accessible by air from General Alfredo Vásquez Cobo International Airport or by river from its port on the Amazon River. The port has intense commercial activity.

Top 10 hotels in Leticia Amazonas-Colombia: ranking of accommodation in the city of Leticia and Puerto Nariño. book online! ✅