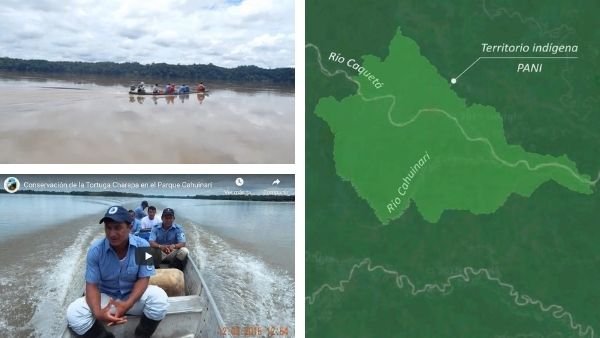 The Cahuinarí National Natural Park was created under executive resolution No. 190 of October 19, 1987 (National Parks of Colombia, 2020). It is located in the northern and central sectors of the Caquetá-Putumayo river system and has an area of 575,500 hectares.

In it are the Cahuinarí and Bernardo rivers, within the department of the Colombian Amazon.

How to get to the Cahuinarí National Park?

In relation to the access roads to the Cahuinarí National Natural Park, there are two ways to get there.

On the one hand, it can be accessed from the town of Araracuara, navigating the Caquetá River to the mouth of the Cahuinarí River, where the Ministry of the Environment cabin is located, once you have navigated some 320 km.

On the other hand, you can navigate from La Pedrera, going up the Caquetá River to the mouths of the Cahuinarí or Bernardo River, approximately in an eight-hour journey by boat with an outboard motor (Organización Colparques, 2020).

Flora and fauna of the Amazon in the Cahuinarí National Park

The flora of the park corresponds to tropical humid forest with a great diversity of plant formations. You can see treesover 40 meters tall, tabular roots and a large presence of epiphytes and parasites (Ecured, 2020).

In the protected area of the park, tall and well-developed forests are evident; Combinations of low forest with dense undergrowth are also observed, as well as high forest with little presence of palms.

Botanical description of the plant, food and medicinal uses, disadvantages. Acidity: importance, how is it measured? the most acid fruits.

On the other hand, the forests of Cahuanarí are home to a great diversity of species animals, including reptiles such as the charapa turtle (Podocnemis expansa), the largest freshwater quelonian in America and perhaps in the world, in danger of extinction; the taricaya tortoise (P. unifilis), the morrocoy (Geochelona denticulata) and (G. carbonaria), alligator babillas (sclerops, Paleosuchus trigonatus) and the black alligator (Melanosuchus niger);

You can also see birds such as the white heron (Casmerodius albus), the night heron (Nyctiocorax nyctiocorax), the macawsand parrots (Ara ararauna; A. macao; Amazona amazónica);

Likewise, the park has geological formations and different types of soils, the petroglyphs being of great importance to the shamansbelonging to the indigenous communities of the region such as the Boras and Mirañas (Ecured, 2020).