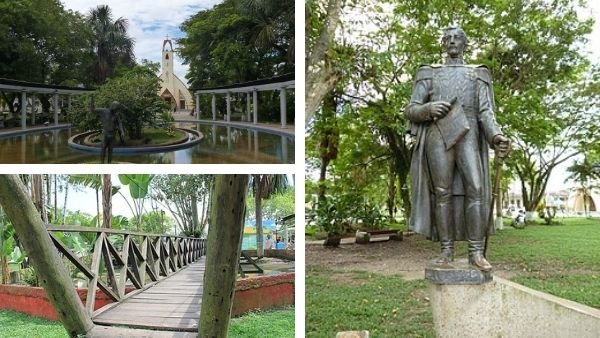 It is the main urban park of Leticia, Amazonas Department, Colombia. It was created in 1940, by Law 114 of December 23, with the name of Francisco de Orellana square, on the occasion of the IV centenary of the discovery of the Amazon River by the Spaniard in 1542 (Alvarez, 2012).

Santander Park has a direct view of the Amazon River. It has a small lake with species of Victorias Regias, as well as pedestrian paths and in the center a large fountain and water mirror.

In addition, it has a court for soccer, basketball and volleyball practice.

Around the park there are statues dedicated to Francisco de Paula Santander and the indigenous peoples, as well as a mobile library or cultural space with free access, from the Bibliovan project that houses some 150-300 books in abandoned refrigerators and conditioned for this purpose.

The Concha Acústica was also built, a place for cultural expressions and exchanges between three countries: Colombia, Peru and Brazil (Álvarez, 2012; Millán Muñoz, 2020).

The park is also a meeting place for locals and tourists, located near the Cathedral of Our Lady of Peace, commonly called “parrot park”.

Where is Santander Park located?

It is located in the southeast of Colombia, on Carrera 11, between streets 7 and 8 in downtown Leticia, facing the Amazon River, therefore it has an extraordinary panoramic view.

The famous birds of Santander Park

At the end of the afternoon, colorful birds of the Amazon converge in this park and above all many parrots that come to sleep in the branches of the trees, brightening up the atmosphere with their daily noise;

You can also go up to the church to have a better view of this spectacle and its sunsets.

Another of its attractions is the endemic vegetation typical of the Amazon region, being able to appreciate the Victorias regias, very common in less urban environments of the Amazon (Alvarez, 2012).

Where to eat in Parque Santander in Leticia?

In the Santander Park there are street vendors selling arepas filled with cheese, honey and condensed milk, as the locals have a sweet tooth. yucca) and açai.

This last option offers cassava starch-based pancakes called baiju with different sauces, including those typical of the region.

In addition, you can enjoy smoothies or sorbets made from açai, an Amazonian fruit with beneficial health properties and is also very refreshing.

Video of Santander Park from the air(drone)