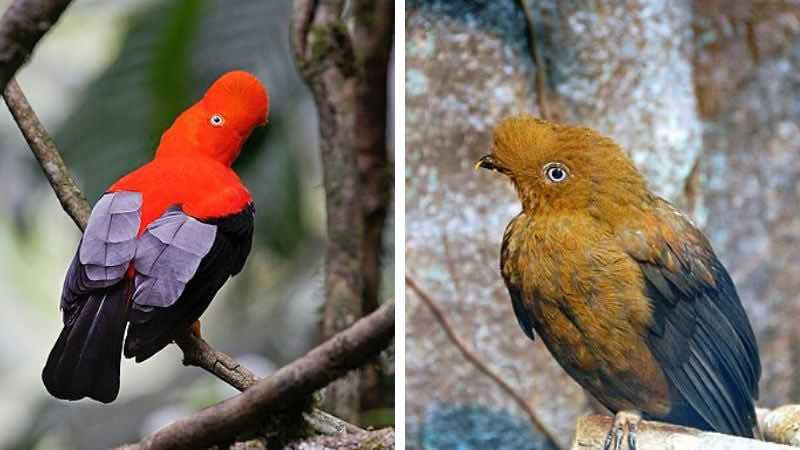 The Cock-of-the-Rock (Rupicola peruvianus) is a passerine bird of the cotingidae family, popularly known as yunga, native to the Andean-Amazon region.

It generally lives in Venezuela, Colombia, Peru and Bolivia, between 500 and 2,400 meters above sea level. It is the official bird of Peru.

Characteristic of the cock of the rock

It presents a marked sexual dimorphism.

The male has a very colorful orange or bright red plumage, and a crest that covers part of the head, giving it an exotic appearance.

Its body shape is very unique, and is practically unique in the Amazon due to its almost “rectangular” morphology.

The female, on the other hand, has a more subdued plumage color and a smaller crest than the male.

The crest of this bird is its most relevant characteristic, since it is very noticeable, hiding part of its beak.

It is a difficult bird to observe in the wild in the forest. It also nests in practically inaccessible places. It is a bird threatened mainly by increasing deforestation.

It feeds mainly on dried fruits and seeds and serves as a seed propagator.

During courtship, the male performs various songs and dances, while the female takes care of the egg and the young, always trying to be close to her nest and protect her young from snakes, huatíes and eagles.

The courtship period begins in October and ends with incubation around November to February, with a long period of 42 days.

Song of the yungas