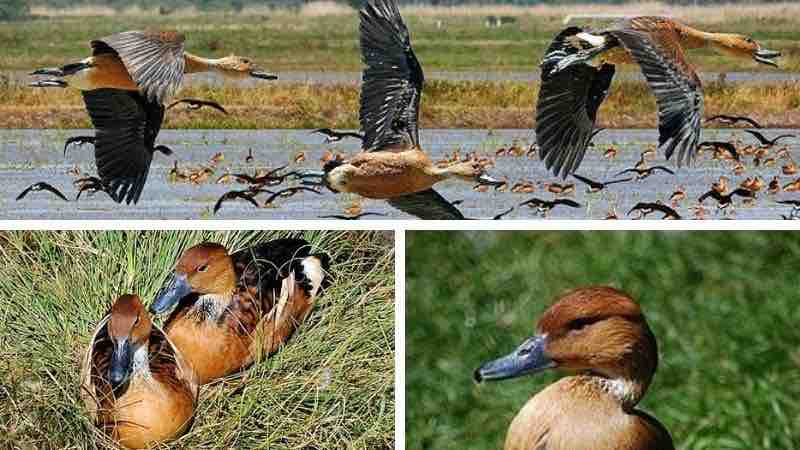 It is an anseriform bird of the family Anatidae. It lives near freshwater bodies, and is widely distributed in tropical areas throughout the world, especially in South America and Africa.

It lives and travels in flocks, sometimes of hundreds of birds. It is a seasonal migratory bird. It measures 43 to 53 cm in length, and weighs 748 to 1,050 g.

The long neck and legs give it the appearance of a goose. Their flight is majestic and beautiful in large flocks.

It has reddish-brown plumage, long legs and a long gray beak. It emits loud, high-pitched sounds (kee-wee, or surirí-siririrí). It has a black and white feathered head.

Its chest is reddish and its flanks are barred. The plumage of the rest of the body is light reddish brown. Wings and tail are dark brown.

This bird feeds on seeds and wetland plants; the female in the breeding season may eat mollusks, aquatic worms and insects.

It nests in tree holes or in nests built by other birds. There the female lays about ten eggs.

The breeding period in the Amazon basin runs from the end of November to January, coinciding with the flooding season.

They are monogamous birds whose courtship begins when both bow their heads and ends with a small aquatic dance.

The great predator is the hunter, to eat their meat, or the pesticides used against crop pests such as rice.