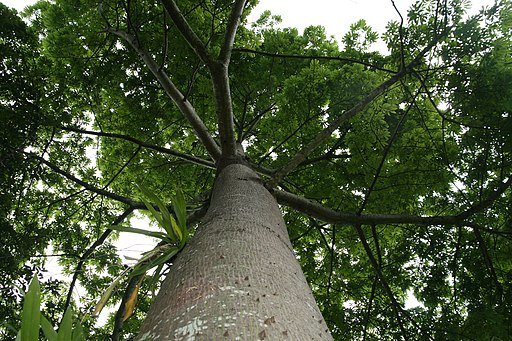 There is an origin myth related to the birth of the Amazon basin that is like a “great legend”, and that is shared by several Amazonian groups.

The origin of the universe according to the Uitoto

One of the versions of this great myth or legend is that of the Uitoto, Huitoto, Witoto, Guitoto or Murui-Minane, which is expressed in the Bora-Witoto language. The Uitoto are an ethnic group distributed between the Colombian and Peruvian Amazon, although more so in the former.

Their original territory is located in the middle part of the Caquetá River and in the jungle area that extends to the Putumayo River.

The Caquetá River originates in the Colombian massif, flows between Colombia and Brazil, and empties into the Amazon River.

The Putumayo River rises in the Colombian Andes, flows through the territories of the current countries of Colombia, Ecuador and Peru, marking the southern limit of the Colombian Amazon with that of Peru, until it flows into the Amazon River.

According to this great legend or major legend, in the Amazon there was a virgin, Jitiriguza, who was impregnated and conceived a son who became the tree of life and food.

In order to dispose of its fruits, the tree had to be felled by mythological beings (Púa-Mora 2010; Roldán-Cárdenas 2005).

Another version of the myth

A variant of the story states that the felling of the tree of plenty was decided at a meeting of the chiefs of all the tribes.

Meru, the creator father of the whites, stole an axe to fell the tree, causing a devastating deluge.

The tree fell, with a great crash, and its branches, leaves and roots scattered all over the earth.

From its thick trunk the Amazon River was born.

From its branches, foliage and roots, the numerous tributary rivers of the Amazon and their tributaries were born, forming a vast and intricate network of fresh water.

From the sap of the tree, water was born, which is the true support of Amazonian life. And fish grew in the water, which is one of the great riches of the basin.

Another variant, collected by Montoya-Galeano (2017) and Murillo-Primero (2001), narrates that there was a time when hunger reigned in the jungle. There was no food and people were very hungry.

A girl was looking for something to eat in the jungle and came across a large earthworm, which transformed into a young boy.

The young earthworm proposed to the girl that if she visited him frequently, he would provide food for her ethnic group.

And so it was, and they fell in love. The girl’s mother surprised them on a bed of dry leaves and threw a pot of boiling water on them.

The young man died and the girl survived, but with a great sorrow of love. The jungle grew dark and filled with sadness.

At the place where the young man died, a tree grew so tall, laden with numerous and varied fruits, that it reached to the sky.

But greed was stronger, and the tree was felled for the benefit of a few. And hunger and desolation returned to the jungle.

The spirits took pity on the people and made the trunk of the tree rot so that a great river would form and feed them all. Thus the Amazon and its tributaries were born.

Since then, there has been no more hunger in the jungle, unless someone comes again to appropriate the fruits that belong to everyone.

What was this tree of plenty?

In the Bora-Witoto language, the tree of abundance is called Moniya amena, and is a beautiful myth of origin, shared by other peoples of the Amazon region, especially in Colombia and Peru.

Other peoples, such as the Quechua of the Napo River, in the Peruvian jungle, call it Samuna supay, and in their narratives allude to the lupuna(Chorisia pentandra), as the tree of abundance, which serves as a mythical reference in many Amazonian places.

The lupuna is a gigantic tree, reaching more than 60 m in height and 3 m in diameter. For the Quechua of the Napo, each Lupuna tree has a protective spirit that nurtures and protects it, and dissuades anyone who wants to cut it down.

For the Yagua, a Peruvian ethnic group from the Loreto region, who live on the banks of the Amazon and its tributaries Nanay and Atacuari, the Amazon River was formed from the fall of a gigantic lupuna, from whose trunk the Amazon was born, and from its branches the tributaries were born.

The myth of the impossible love between the sun and the moon.

There are other Amazonian myths about the source of the Amazon River. Some Brazilian Amazonian ethnic groups say that the great river was born from the impossible love between the Sun and the Moon.

This impossibility of loving each other greatly distressed the Moon, who cried so much and so much that the shed tears reached the sea. As they were sweet tears, they were rejected by the sea, and ended up forming the long and flowing Amazon River (Gómez-Platero and Palma-Ehrichs 2011: 13).