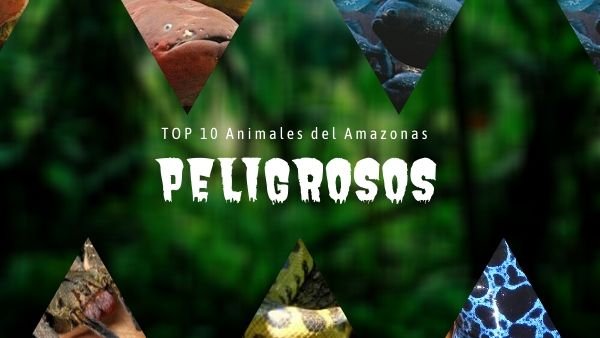 There are some dangerous Amazon animals that do not appear on this list such as the jaguar and the crocodile or black caiman . We have included this pair of successful predators in another article dedicated to the animals of the Amazon in danger of extinction.

In addition, this pair of wild beasts, although they can be lethal to humans, rarely attack us if we do not bother them. On the other hand, as we are in favor of its preservation, by including it in this list we could generate terror towards them and make some people think that they are a threat to their lives, and nothing is further from the truth.

The 10 most dangerous animals in the Amazon Rainforest

Without further exceptions, we present our list of the 10 most dangerous animals in the Amazon. An unfortunate encounter with one of these creatures could be lethal to humans.

The electric eel (Electrophorus electricus, E. voltai and E. varii) is a quite particular and unique predator of the Amazon River. To hunt its prey, it uses electric shocks of up to 8 times the voltage of a conventional 110V outlet but with a lower amperage. As if that were not enough, they can duplicate this discharge by performing a maneuver in which they join their head (positive pole) with their tail (negative pole) coiling around their victims.

It is the longest snake in the world and that is why it generates so much terror and gives rise to many stories, it is not poisonous but a constrictor, which means that it kills its victims by strangling them and swallowing their corps in one piece.

The green anaconda ( Eunectes murinus ) is very dangerous since it is a magnificent predator and is at the top of the food chain. However, humans are not on their menu, although some isolated incidents of attacks on children have been reported.

A study on the damage caused by fish to fishermen carried out in the western Amazon of Brazil (Costa, 2020) determined that the majority of injuries are caused by piranhas , especially at the moment when the hook is being removed after fishing. .

The candirú or canero (Vandellia cirrhosa) is a tiny fish of 2 to 5 centimeters, almost transparent, which is said to be attracted to human urine and penetrate the genitals of men or women to parasitize them. According to legend, this small fish hooks itself to the walls of the urethra to suck the blood of its victims.

After hearing this story, bathers in Amazonian rivers take precautions by covering their genitals when entering the rivers. But according to experts, they are nothing more than stories since only one clinical case has been reported, which was not well documented.

According to Costa (2020), most cases of poisonous injuries received by fishermen in his study area were caused by a fish called mandi in Brazil, cogotúo catfish in Venezuela, barbudo in Ecuador, and nicuro in Colombia.

According to the study, the alternative remedies applied to reverse the effects of the mandi wound were: putting the mandi eyes on the wound, ice with salt, chrome mercury, meracillin with paracetamol and merthiolate with dipyrone.

If there is an animal in the jungle with a truly lethal weapon, it is the dart frog . It only takes 1 mg of the toxic alkaloid that impregnates its skin to kill humans and even two African elephants. They call it dart because the indigenous people impregnated their arrows and darts with this substance to make them deadly. However, this is not just only one species but the common name to define at least 184 similar species of poisonous frogs, with very striking colors that inhabit the Amazon Rainforest.

The also called Brazilian wandering spiders ( Phoneutria nigriventer ) armadeiras (Brazil) armed spiders or red beak (Argentina) are a group of 8 species typical of Central and South America, nocturnal, that do not make spider webs but live in caves or in the trees. They are typical of plantain or banana plantations for which they receive their name.

Scorpions have been considered a serious public health problem in some countries such as Brazil, Mexico and Tunisia. Among them the species defined as Tityus are truly dangerous. Its sting can cause cardiopulmonary complications, hemorrhagic or acute edematous pancreatitis and can even be fatal, especially in children. (Gomez, 2010).

In the Amazon, at least 5 species of Tityus scorpions of the Buthidae family have been identified (Lourenço, WR 2005), this family being the one of greatest epidemiological importance.

Scorpion Tityus. In the event of a bite from these arthropods, it is best to timely apply the appropriate antivenom intravenously. Some of these specimens can measure up to 15 centimeters.

They call it that because its sting is comparable to the pain of being shot. According to entomologist Justin Schmidt, who voluntarily subjected himself to the sting of many species of insects to compare the degree of pain they generate, the bullet ant, ant 24 or paraponera clavata is the insect whose sting generates the most pain in the entire world. After the attack many people faint.

However, its poison is not deadly, or to be more precise, the dose of a single ant is not. In fact, it would take more than two thousand ants of this type to kill a person weighing about 74 kg.

The venom injected into the human body after the bite of a velvet or yellow-bearded snake (Bothrops atrox or Bothrops asper) can cause hemorrhages in the wound, in the gums, in the genitals and in the brain, the latter can be fatal. It can also produce necrosis which can lead to amputation of the infected limb (Javier, 1980)

The common treatment for these dangerous snakebites is the administration of antivenom. However, alexiteric plants have antiophidic properties and are used worldwide in the treatment of snake bites, among them 22 species of Aristolochias stand out. Some have snake-shaped flowers, as is the case with the Aristolochia maxima. Another species used is the achiote or onoto (Bixa orellana) (López, 2009)

More animals of the Amazon

Everything you need to know about Amazon Insects ✅: the mosquito that transmits leshmaniasis, edible culonas ants, fireflies and more.

All about the mammals of the Amazon: jaguar, puma, ocelot, capybara, armadillo, dolphin, manatee, woolly monkey, cotomono, friar, capuchin and many more.