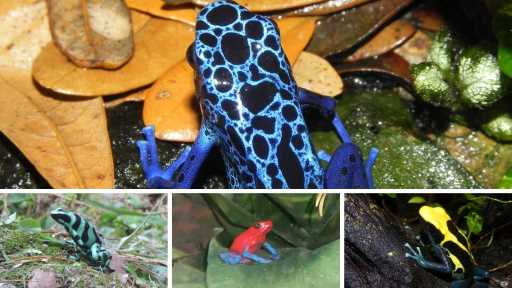 Dart frogs are poisonous, like some other animals and plants in the world. In the Amazon River basin we find highly poisonous substances contained in plants and animals.

Poisons in plants such as the strychnos amazonica genus, of the Loganiceae family, one of the plants used to prepare the deadly curare, or bitter yucca, which contains prussic or hydrocyanic acid. Or in animals such as some species of scorpions, snakes, insects or frogs.

The Swiss alchemist Paracelsus, also known as Theophrastus (1493-1541), considered the creator of toxicology, said that everything can be poisonous, but that the real poison lies in the dose.

Poison dart frog Phyllobates terribilis seems to contradict, in a certain way, Paracelsus, because it is sufficient 1 mg of the toxic alkaloid that permeates the skin of this beautiful and apparently harmless little frog of many colors and whose size is less than 5 cm, to kill, at the same time, adult human beings or two African elephants. That very small dose of 1 mg is the average amount of poison contained in the skin glands of that little frog.

One of the earliest records on the toxicity of dart frogs comes from Jean Roulin, a librarian at the Institute of Sciences in Paris, who observed, on an expeditionary trip he made to South America around 1825, how the Indians located at the mouth of the Orinoco River used substances extracted from frogs to impregnate the tips of their darts and arrows.

The “terribilis” dart frog is not the only poisonous species in its family, although it is the most deadly. Dart frogs belong, in general, to the family Dendrobatidae, which includes a large number of wild frogs, more than 184 species, inhabiting the tropical rainforests of South and Central America.

The family Dendrobatidae is characterized because the grouped species are diurnal and generally territorial frogs, which live on the ground hidden in the foliage, insectivorous (trapping their victims with their long tongues), oviparous (the eggs adhere to the upper part of the mother thanks to a sticky substance, which they lay in some trees until they go to the water), with the toes of their legs provided with an adhesive to climb trees, and they are approximately 5 cm in size, although they have different sizes, skin colors and toxin levels, depending on the species and the area they inhabit.

There are dart frogs of various skin colors: green, yellow, orange, blue, red and even a shade of bluish black.

All are poisonous frogs, but the potency of the toxicant contained varies according to the species.

Some researchers argue that the potency of the venom is related to skin color. That is, they are aposematic, in which pigmentation warns predators of their toxicity.

Why is it called a dart frog?

There are several species of Dendrobatidae to which the generic name dart frog or arrowhead frogs is applied.

This name comes from the fact that some indigenous groups, such as the Emberá of Colombia, apply the toxin from their skin to poison the tips of their darts and arrows for hunting animals.

The Indians subject the frog to the heat of the fire so that it exudes drops of its poison, which they use to impregnate their darts and arrows for hunting.

The strong toxin that dart frogs carry in their skin glands is a powerful alkaloid, batrachotoxin.

A substance that constantly releases acetylcholine into the neuromuscular plate, producing muscle contraction, which causes death by asphyxiation of the victim, by paralyzing the respiratory muscles, similar to the effects of curare on victims wounded by darts or arrows impregnated with strychnos .

Research indicates that batracotoxin, and other toxic alkaloids such as histrionicotoxin and pomiliotoxin, may be related to the local diet consumed by these frogs, which basically consists of some ants of the family Myrmicinae, or some cockroaches or beetles.

Apparently, when dart frogs stop consuming them, they gradually lose their toxicity and eventually become harmless. This is the case with dart frogs in captivity.

The dart frog containing the highest dose of this poison is the P. terribilis, considered the most poisonous frog in the world, which is endemic to the Colombian Pacific coast, in the tropical rainforest zone.

It stores its lethal toxin in glands in its skin, and releases it when it feels threatened.

It has the peculiarity of being one of the few creatures immune to its own venom. This protects it from predators, except for the snake Liophis epinephelus, which resists the venom and eats it.

There are other poison dart frog species, although less lethal than the poison dart frog. P. terribilis. These include Dendrobates tinctorius, a species inhabiting the eastern part of the Guiana Shield (which includes parts of Guyana, Suriname, French Guiana and northern Brazil), a small, black frog with irregular yellow or white stripes on the body.

Or the D. truncatus, a small frog, the smallest of the family, with a size of 23 to 30 mm, with yellow lines on its body and a green stripe on its legs. Or the P. bicolor, predominantly orange in color.

Other types of Amazonian frogs and toads