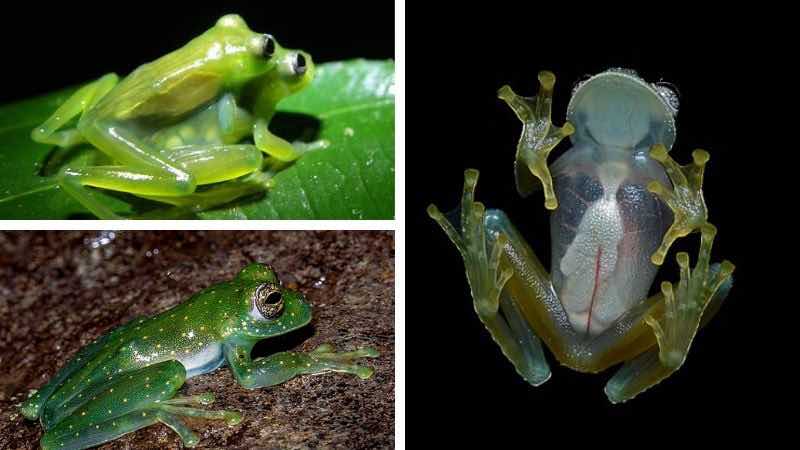 The glass frog(Hyalinobatrachium spp.) is a small forest-dwelling tree frog belonging to the family centrolenidae, a monophyletic group.

Such a group occurs when all the organisms it includes have evolved from the same ancestral population. It is, therefore, a group of Neotropical anurans that are widely distributed from southern Mexico to the south of the Caribbean. Brazilian Amazon and northern Argentina, passing through the territories of the Guiana Shield and the northern Amazon, which includes the following areas Venezuela, Colombia and the Guianas.

Characteristics of the glass frog

We find species of glass frogs in the vast Amazon River basin. They are species that look alike, with the particularity of having some special feature that distinguishes them.

In this case, its transparency or crystalline appearance.

In Venezuela, 25 species of the centrolenidae family have been reported. Among them, at least 15 species belonging to the genus Hyalinobactrachium have been described (Señaris, Ayarzagueña 2001).

Members of this family have various skin colors, predominantly green. They are poisonous frogs. Some species have visible organs, because their belly skin is transparent. In some cases, several of its internal organs can be clearly seen: the heart, stomach, liver and intestines.

Some 48 species of glass frogs have been reported in the Amazon Ecuador (Borjas 2009). Some in the Amazon region, inhabiting forest ecosystems located in the basin of the Napo, Pastaza and Santiago rivers (Yánez-Muñoz, Meza-ramos, Ortega-Andrade, Mueses, Cisneros, Reyes-Puig, Dusan 2010).

One of the latest species described, perhaps the most spectacular among all those already known, is Hyalinobatrachium yaku, which stands out for having dark green dots on the head and dorsum of the body.

It also has a transparent belly, a common characteristic present in all frogs of this genus, but which in this species extends to the pericarp, the membrane that surrounds the heart.

This is why the red color of the blood and its circulation can be observed in the body of this glass frog.

This species was found in three lowland areas of the Ecuadorian Amazon, located between 300 and 360 meters above sea level.

The frog emits a song of high vocal tones, which also has an unusual duration, due to its length, of forty seconds.

Reproduction of the glass frog

In this species, the males take care of the eggs, hiding them under dry leaves until they hatch. And then they are released (Bustos-Gordón 2019). 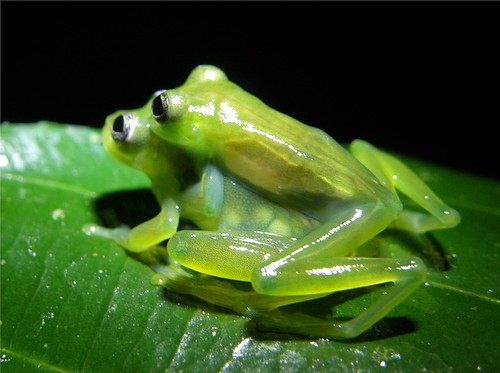 The enemies of this species are the heavy deforestation in the Amazon region, aggravated by the growing colonization of new areas and the opening of new roads that cause the fragmentation of the forest continuity, making its mobility difficult.

Other types of Amazonian frogs and toads