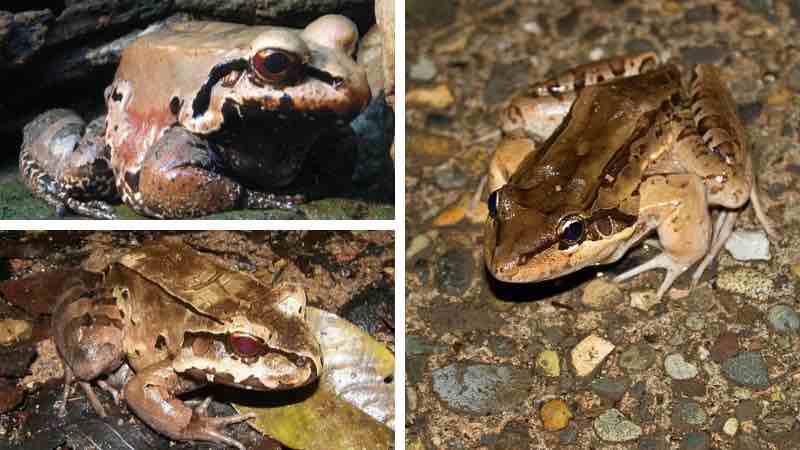 The giant ground frog(Leptodactylus pentadactylus) is a member of the anuran order, and of the family Leptodactylidae, which inhabits the entire Amazon basin, including the Guianas area, where its population is strictly restricted.

In the Ecuadorian Amazon it has been located and studied in the Yasuní National Park and the Cuyabeno Fauna Production Reserve.

It is a light brown frog species, with black spots on its flanks, upper lip with black bands, and grayish-brown belly with black and white spots.

Another difference is that the terrestrial giant frog shows broad black bars, and L. rhodonotus has them transverse and thinner.

Leptodactylus pentadactylus is a large frog with a robust body, broad skull, rounded snout, no cutaneous ridges on the fingers and toes, and toes with basement membrane.

This species presents sexual dimorphism, but not very noticeable, limited to the fact that reproductive males have very swollen forearms and a small spine on the thumb.

This species has terrestrial and nocturnal habits. It inhabits mostly dry land areas within tropical rainforests.

It gives away its presence with a loud chirp, which repeats “woooop“, and is usually emitted at dusk.

Reproduction of the giant terrestrial frog is terrestrial, and oviposition occurs inside subway tunnels constructed by the males.

There, the female deposits a foam nest, which has about 1,000 eggs of approximately 3 mm in diameter each.

What does the giant ground frog eat?

The species feeds on a wide variety of terrestrial arthropods such as crickets, spiders, scorpions and beetles.

Its most common predator is a fly of the Ephydridae family, which lays its eggs inside the foam nests of L. pentadactylus, so that its larvae can feed on the frog’s eggs and embryos.

However, the main predators are snakes, caimans and coatis.

A peculiarity of L. pentadactylus is that when it feels threatened it inflates, and raises its hind limbs to look like a larger individual than it is.

Another is that when captured, they emit agonized vocalizations in an attempt to persuade their attacker to release them.

Is the giant ground frog edible?

Its meat is edible for many indigenous groups in the Amazon basin, although its impact on the preservation of the species has not been evaluated. 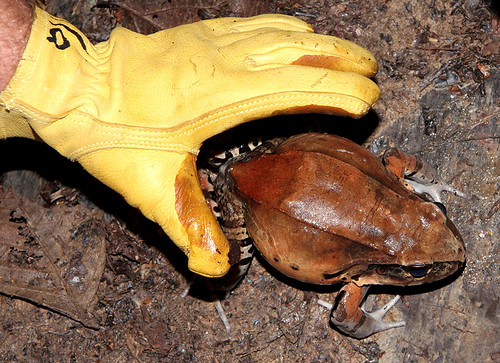