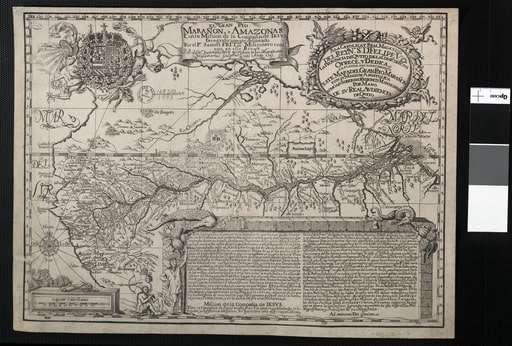 The history of the evolution of the Amazon River Maps is full of fascinating data that we present to you below.

The Jesuits and the first Amazon River Maps.

The first map of the Amazon River, was the work of the Jesuit Father Samuel Fritz, who was a missionary in the Peruvian jungle for thirty-nine years, between 1685 and 1724.

Fritz, born in Bohemia, was a tireless student of indigenous languages, to the point that he developed a Spanish, Quechua and Jebero vocabulary, which is preserved in the British Museum.

Fritz also made a map of the course of the Amazon River and its tributaries in 1691, using only a compass and a sextant.

That map served as a model for others. Two copies of the map remained, one of them is in the Royal Academy of History, in Madrid, and the other in the Royal Library, in Paris.

Another Jesuit born in Bohemia was Father Enrique Richter. After years of evangelizing the indigenous people in the Amazon jungle, he was assassinated by the cunivos.

Fritz and Richter practiced cartography “in situ”, and were considered the most outstanding Jesuit cartographers between the end of the 17th century and the beginning of the 18th century, pioneers in the mapping of the Amazon river.

The contributions of these Jesuits were continued by other Jesuit fathers such as Pablo Maroni, Juan Magnin, Franz Weigel, Carlos Brentano and, later, Juan de Velasco.

The latter was the first Jesuit cartographer born in America.

✅ Juan de Velasco and his History of the Kingdom of Quito.

Velasco wrote the History of the Kingdom of Quito, an illustrated work with many maps.

The contributions of Magnin and Weigel helped chart the course of the Amazon and Ucayali rivers.

✅ The rivers described by Carlos Hirschko.

The missionary Carlos Hirschko drew the first map of the course of the Marañón River, and of the confluence of the Apurimac and the Madera.

The development of cartography in an almost unknown Amazonian scenario was an imperative need for the Society of Jesus in its mission to evangelize the indigenous communities of the north since the 17th century, and to support the conquest and colonization of the region.

Without maps it was difficult to trace routes, and locate the missionary centers and the Indian towns that the Jesuits were creating.

On the other hand, the outpost of the missions of the Franciscan order in the south, since the 17th century, did the same, exploring the lands of the Huallaga and Ucayali basins and their tributaries, although without having the great cartographic skills of the Jesuit missionaries.

A map is a graphic representation of a territory, sometimes very simplified and rudimentary, because it was made according to one’s own experience and guided by the information that other travelers and explorers offered to the cartographers.

The previous maps and the testimonies of chroniclers of the Indies and naturalists were also taken as reference.

Cartography did not make great progress, and practically stagnated for a long time, not only in its application in the Amazon Rainforest, but also in the known world.

Until the 16th century, despite the encouragement derived from the long interoceanic navigation voyages of the Portuguese and Spanish, maps continued to be made as if nothing had changed.

Until the great contribution of Gerhardus Mercator (1518-1594), who transformed the history of cartography of his time, applying innovations such as the projection system based on projection canevas in 1569.

Using his Mercator technique, he produced the great map of Europe in 1554.

The year of his death, 1594, his book of world maps was published, which he called Atlas, a name taken from a character in Greek mythology condemned by Zeus to hold the Earth and the firmament on his shoulders.

Others say that it was related to a North African king who dreamed of becoming a mountain to embrace the sky.

It took a long time, since the time of Mercator, for great innovations to occur in the field of cartography.

✅ From aerial photography to GPS

One was the use of aerial photography during the First World War, to observe enemy positions on the battle fronts, a technique that was also used to draw maps.

Half a century later, with the beginning of the satellite era, cartography took a great leap forward.

In 1966 the PAGEOS satellite was launched.

In the 1970s, the three Landsat satellites were launched, on which high-resolution photographic equipment was placed.

Then photo interpretation techniques were applied, through the stereoscopic vision of photogrammetry or aerial photography in greater detail.

GPS works in a network of at least 24 satellites in orbit around the Earth, at an altitude of about 20,000 km.

✅ Impact of modern cartography in the Amazon Rainforest.

Nowadays the Amazon Rainforest is no longer an unknown territory, although still a beautiful one full of wonders despite the exponential increment on the deforestation rate, the fires rate, the advance of illegal mineral exploitation and drug trafficking.

However, high technology is available to better manage the resources of the Amazon Rainforest, until there is real political will to preserve it. 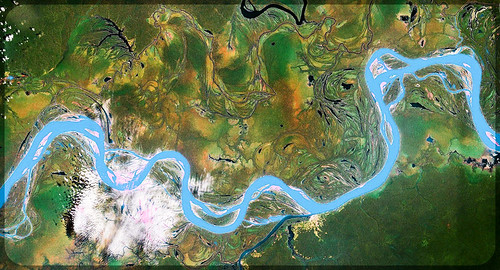 ▷ Maps of the Amazon from the RAISG

In 2017, the data was collected to determine the map of illegal mining in the Amazon prepared by the RAISG, which is an Amazonian network of georeferenced socio-environmental information.

Thus, 2,312 points and 245 areas of unauthorized extraction of minerals such as gold, diamonds and coltan were located.

An antecedent of this initiative was the InfoAmazonía project, created in 2012, to collect data and graphic representations of the Amazon, the largest continuous tropical forest on the planet.

✔ Interactive Map of illegal mining in the Amazon Rainforest.

Online interactive map of illegal mining in the Amazon courtesy of the RAISG.

✔ Map of natural and protected areas

✔ Maps of deforestation in the Amazon River Basin

▷ Map of the Amazon Rainforest