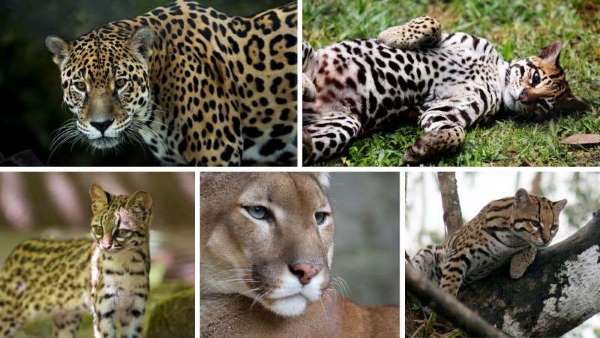 These jungle animals are mammals and are at the top of the food chain. They are in the Carnivora order of the Felinae subfamily and in turn belong to the Felidae family.

Facts about the Amazon Cats and big cats

In relation to the essential characteristics of the subfamily, they have large, conical lower fangs and carnival teeth.

That is to say, their teeth close in scissors mode to be able to cut the meat of their prey, which is a distinctive feature.

Another characteristic of these species is that they are highly specialized carnivores .

In addition, the cats of the Amazon have an extremely developed sense of smell thanks to the vomeronasal organ through which they can even obtain flavor from the air. This allows them to efficiently detect different tracks in search of their prey. Thus they establish a complex chemical communication with their environment.

On the other hand, in their physiognomy, the mustaches fulfill a very important function and that is to indicate cats the direction of the winds.

Currently, the Amazon rainforest cats are constantly threatened by human incursions into their jungle habitat.

The deforestation of the forest and the constant fires promoted by the expansion of licit (African palm) or illicit (coca) monocultures increasingly reduce the natural environments where they live.

All of which has brought as an immediate consequence the reduction of the populations of the different species of felines typical of the extensive Amazon region.

Among the feline species that inhabit the Amazon rainforest, the Jaguar (Panthera Onca ), the Ocelot (Leopardus Pardalis), the Oncilla (Leoupardus Tigrinus) and the Puma (Puma Concolor, Carnívora Felidae) stand out.

It is one of the largest cats in America. It is also known as “tiger” since colonial times given its resemblance to the Asian tiger. As for their skin colors, yellow and black spots stand out with variations of black or brown throughout their fur. being the only big cat with spots or spots on its body.

The jaguar is found in the same habitats where other feline species such as ocelots and pumas cohabit.

Usually this species of feline is solitary and is very territorial, marking its territories through various methods such as markings on the ground, urine, glands and announcing its presence with roars.

However, more than two females may be present in a jaguar’s territory. Given the presence and human activity, the species is usually active at any time of the day. The jaguar is a successful predator and has the most lethal bite of all the cats.

Also known as Cunaguaro or Tigrillo, it is a medium-sized feline. Like the big cats they share certain distinctive habits, such as being solitary, territorial and essentially nocturnal animals, in their territory they usually inhabit two females which they will reproduce exclusively with that male. There is no specific season for mating.

Their eating habits are clearly defined by being carnivorous. Any prey that they can hunt and kill is part of their diet. Given the advancement of man in the territories where this feline lives, it has become common for its habits to attack and hunt poultry , being the object of persecution and hunting by humans.

Precisely this constitutes a constant threat to the survival of the ocelot throughout the Amazonian territory, since it has lost territories now used for livestock, mining and other activities related to the exploitation of natural resources in these regions.

Also known as Margay, very little is known about this particular feline, this species lives mainly in dry forests, jungles and of course in the Amazon region, sharing its habitat with the jaguar, the ocelot, the puma and the jaguarundi.

With yellow and white fur, with black rosettes, a very long tail and quite large eyes compared to their size, these cats can be classified as small, nocturnal and quite solitary.

One of its outstanding features is that it is the only one of its kind that can climb up and down tree trunks as it rotates its ankles in a 180º turn.

Its diet is similar than the rest of Amazon rainforest cats, predominantly carnivorous hunting and trapping animals, however it does not exclude the consumption of fruits and birds, the loss of their habitat is largely due to deforestation, in addition to being subject to hunted for its fur for aesthetic and fashion purposes.

It is one of the smallest felines that lives in the Amazon.

It is comparable to a domestic cat, with shaggy and thinner fur, yellow on the back and sides with white on the chest and ventral region.

It has an elongated tail, is characterized by nocturnal and solitary habits. Regarding its eating habits, it feeds on small mammals, eggs and birds.

Also known as the American lion or mountain lion, it is the second largest feline in America after the Jaguar.

Their fur is distinguished by being brown, with reddish or gray tones and towards the tip of the tail black, they are both diurnal and nocturnal and solitary, totally carnivorous, highly adapted to survival in different habitats, such as the Amazon region.

Cultural context of cats around the world.

The group of felines differed from the group of canids for more than 50 million years.

Cats, in their long evolution, have been stealthy animals that have surprised the world, becoming wonderful beings that have fascinated human beings since ancient times.

Small cats, agile and mysterious like the domestic cat, have been kept as pets for thousands of years.

The big cats have inspired, for their part, respect, terror and admiration, and have starred in many children’s stories and frightened rural populations.

Since we were children we have read stories like the Jungle Book, by Kipling, heard the stories of Uncle Tiger and Uncle Rabbit and watched the Tarzan movies and the animated movies about the king of the jungle, although the lion lives in the prairies and not in the jungle, which is the abode of the tiger, the jaguar and other big cats, but not the lion.

Through the cat we have learned to appreciate the tiger. French novelist Victor Hugo once said that “God made the cat to offer man the pleasure of petting a tiger.”