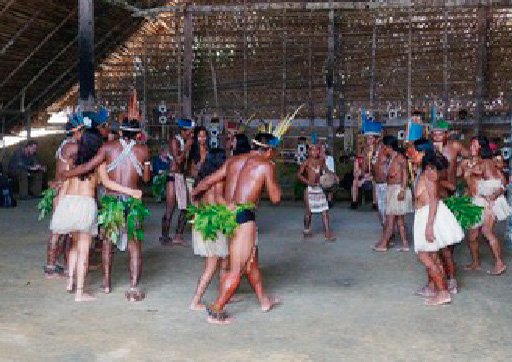 The typical dances of the Amazon are a reflection of the culture of its indigenous peoples, as well as the environment, nature and myths that influence their movements and choreographies.

There are many beliefs and motives that give rise to dances, such as the initiation of marriage, the onset of puberty, the solar and lunar cycles, as well as dances of war, curing disease, and to commemorate one’s death, in which rituals are performed to invoke the ancestors.

Something very important to take into account is that the indigenous dances did not originate with the purpose of demonstrations for the enjoyment of spectators, or as we understand dance in Western culture, but are a part of rituals where everyone participates with group engagement and feeling.

The following video explains this very well. It is in Portuguese, but if you speak Spanish, you will understand almost everything said.

Typical dances of the Amazon region

Now, let’s present a selection of 13 typical dances of the Amazon region.

Buri Buriti is known as the dance of war, and its music uses instruments such as drums, bass drum, manguaré and maracas.

It is a dance that reminds the participants always to be alert and never forget their roots and customs, which must be transmitted from one generation to the next to continue the valuable legacy of their people.

The Ayahuasca dance was inspired by the work of the healers or shamans of the Amazon.

This dance shows how the healer seeks to alleviate various illnesses; the healers entrust themselves to the mother earth and the father river to carry out this work.

The dance of the Amazons is not typical of any indigenous people, but rather is a current westernized representation of the first encounter with the white man, where the dancers demonstrate dexterity, agility and skill in the choreography.

The participating women demonstrate their beauty and, above all, a lot of strength, commanding respect and proving that they are self-sufficient.

One of the traditional indigenous dances is the Zuyuco, which is performed to celebrate the construction of a new set of traditional musical instruments, such as the maguaré.

These instruments are drums that are usually played by hitting them with a pair of rubber mallets.

The Bëtsknaté is a dance representative of encounters among the indigenous communities of the Alto Putumayo region.

It is part of the Carnaval del Perdón and is led by a person called Matachín Mayor. This character leads the parades wearing a red mask and carrying a bell.

The Bambuko is a dance in which three couples take part while two musicians interpret the melody.

The three couples dance forming an oval. One of the particularities of this dance is that they must not turn their backs to each other.

The Tobas dance originates from a community in the jungle part of the Amazon which, as the name of the dance indicates, is typical of the Tobas community.

Dance: Tobas. The Oruro Carnival (or Carnaval de Oruro) is the largest annual cultural event in Bolivia. It was declared one of the Masterpieces of the Oral and Intangible Heritage of Humanity by UNESCO in 2001.
Dances include Caporales, Diablada, Kantus, Kullawada, Llamerada, Morenada, Potolo, Pujllay, Suri Sikuris, Tinku, Tobas and Waca Waca. Source: Osvaldo Luna. Some rights reserved

The movements of the Tobas dance include jumping or leaping steps in an abrupt manner, as the dance itself represents the men and women hunting in the jungle.

The decorations and costumes in this dance represent animals and their symbolism, such as the jaguar, the snake, the hummingbird and the condor, which represents wisdom.

Tinkus is a rhythm dance of Bolivian origin, the name is derived from a ritual called Tinku and is performed in Bolivian communities.

The dance is a blood offering given during encounters between communities, and takes place in the month of May. 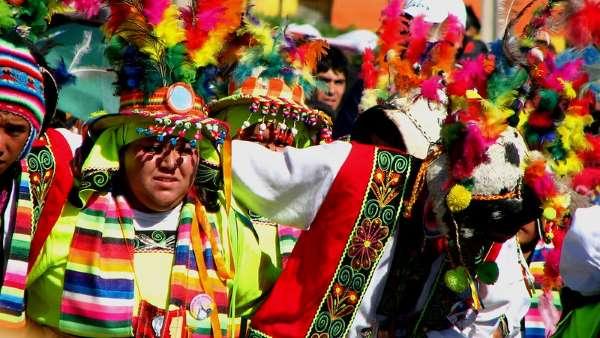 The dance’s purpose is the liberation of energies to offer to mother earth and to celebrate the encounter between peoples, since the word Tinku means encounter.

According to Indigenous Dance of Brazil, from the Joaquim Nabuco Foundation Library, the dance of the kuarup (name of a sacred tree) is a ritual of reverence to the dead, and is typical of the indigenous people of the Alto Xingu, in Mato Grosso. 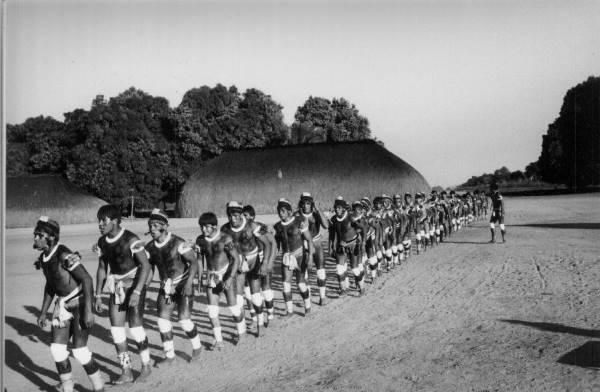 Kuarup festival in the village of Kamayurá Source: No machine-readable author provided. NVB assumed (based on copyright claims). [CC BY-SA 3.0]

Always initiated on Saturday mornings, the Indians dance and sing in front of kuarup trunks, placed where the honored dead were buried. 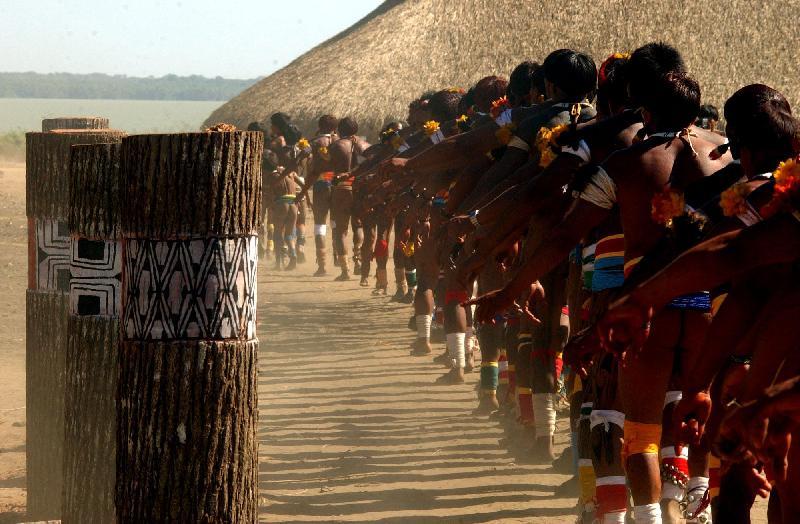 Performed by Bororo Indians in Mato Grosso, where the dancer represents the soul of the onça o tapir that he killed with his own hands. He must not be identified, so he covers himself with the skin of this animal, as well as a mask of palm fringes to disguise his feet and hands.

The whole tribe accompanies the shaman and the dancer in a continuous beating of feet, so that there is no discontinuity. The dance continues throughout the night.

This is a warrior dance in which women also participate. The men and women are arranged in rows facing each other and begin to sing, jumping from one foot to the other.

They advance 12 steps forward and return, exchanging position with other rows, then repeating in the opposite direction. It is characteristic of the Coronado Indians of Rio Grande do Sul.

Another typical dance of the Amazon is the Kahê-Tuagê, originated by the Kanela Indians of the Tocantins River region during the dry season.

In this sacred dance, the feminine element predominates, as the women are the protagonists and take the lead. An indigenous woman stands in the center of a line of young women who have not yet had children. The young women in line stand in place, with their knees bent and swinging their arms and bodies back and forth.

When the hands are in front of the body they clap, marking the rhythm. The men are rarely invited to participate in the dance, limiting themselves just to answering the chorus of the chant.

Uariuaiú is dedicated to the guariba monkey or howler monkey, from which some tribes consider themselves descendants. The dance is not accompanied by any instrument, but only by chanting.

The women paint their faces and bodies, wear skirts made of banana leaves, and roll around the men, carrying their children. Everyone enters the dance imitating the monkey.

In summary, these typical dances of the Amazon are one of the important cultural manifestations of its indigenous peoples, which are transmitted from one generation to another and through which you can understand more clearly their way of life and deep-rooted customs.

If you know of any other typical dances of the Amazon that we have not mentioned here, you can include it in the ⬇ comment box ⬇ and thus contribute to the preservation of Amazonian cultural traditions.