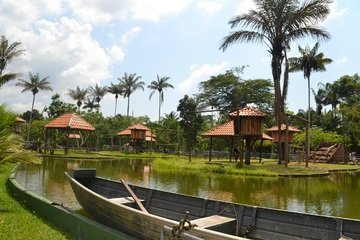 The Amazon region is full of natural attractions that will fascinate you. Join us to discover the best tourist sites in the heart of the Amazon-Brazil rainforest.

The Amazon is the largest state in Brazil, the largest and most diverse rainforest in the world and recently chosen as one of the 7 New Wonders of Nature in a contest organized by the New7Wonders foundation in Switzerland.

One of the first places to visit in the Amazon is its capital, Manaus, the main financial, corporate and economic center of the Northern Region of Brazil. It is located in the center of the largest tropical rainforest in the world.

In the jungle around Manaus, you will find all kinds of accommodations that offer a practical way to enjoy the Amazonian flora and fauna. In these places, tourists wake up and are enchanted by the music of more than 1,300 species of birds in the region, such as the Uirapuru.

What to do in Manaus?

Manaus and its surroundings offer an endless number of activities to do and tourist sites to visit, among which the following stand out:

The city of Manaus is one of the richest in Brazil in terms of natural resources and variety of tourist attractions. Visitors are enchanted by the exuberance of its nature, full of life, colorful and exotic.

This theater has a diversity of environments conceived with different materials and styles, making it a highly eclectic space.

It is the most important building in the city, not only for its incalculable architectural value, but also for its historical importance, as it is living proof of the prosperity and wealth of the golden rubber cycle.

2. Meeting of the Waters

It is the result of the fantastic union of the dark waters of the Negro River with the muddy waters of the Amazon River, which in the stretch that goes from the municipalities of Tabatinga and Manaus, is popularly known as the Solimoes River.

Both rivers run parallel to each other, without mixing, for a distance that varies between 6 and 18 km. depending on the time of year, providing an unforgettable spectacle. The encounter occurs due to the difference in temperatures, densities and currents of the two rivers.

Why don’t the waters of the rivers mix?

One of the things that tourists like most about this “botanical garden”, which is really a huge Amazonian forest, is the tower in the middle, from where you can appreciate the immensity of the Amazon and take excellent pictures of the birds.

If you like photography and have a tripod and a camera with zoom or telephoto lens, this will be the ideal place to go.

In addition, the park offers a program that appeals to both domestic and foreign tourists: guided walks along the trails, environmental education, a library with information on botany and the environment, exhibitions, events and courses on environmental topics.

Ponta Negra beach is located 13 km from Manaus and is one of the city’s main tourist attractions.

It offers many entertainment options for visitors: swimming, jogging, volleyball, futevolei (sand volleyball played with the feet and other parts of the body, except for the hands).

As well as skating, walking or simply admiring the beauty and magic of nature. It is one of the most modern resorts in Manaus today.

It is one of the most exotic natural attractions that the Amazon has to offer (April to September subject to change).

The experience of crossing an “igapó” (typical Amazonian vegetation) aboard a canoe is simply a mixture of beauty and mystery as you pass through the tangled jungle, encountering the extravagance and enchantment of the breathtaking surroundings.

Parque do Mindu is a 33-hectare ecological reserve, home to several endangered animal species, such as the small sauim-de-coleira ape, which is only found in this region.

Visitors can walk the trails and learn about the variety of flora, as well as visit the information center and the library specialized in environmental issues.

Facilities include an orchid garden, an aromatic and therapeutic herb bed, and the exciting hanging walkways, to tour the park from above. There is also an amphitheater with capacity for 600 people and private parking.

This forest is managed by the Instituto Nacional de Pesquisas da Amazonia, and has an area of 13 hectares where native fauna, such as giant otters and manatees, among other species, coexist.

In the Casa de la Ciencia you can take educational tours to learn about the biodiversity of the rainforest. It is located in the Petrópolis neighborhood, in the central-eastern part of the city, with its main entrance on Otávio Cabral Avenue.

Park facilities include walking trails, suspended walkways, a lake, nurseries, an orchid garden and many other attractions that combine entertainment with science and education.

The CIGS Zoo is the largest animal center in the Amazon region, built and managed by the Brazilian Army. It was inaugurated in 1967 with a didactic purpose, which is to promote the recovery of victimized wild animals and their return to their natural habitat.

The zoo is the ideal place to visit with the family, because the youngest members of the household will be able to have safe contact with many species of the Amazon.

Among the species that coexist in the zoo are jaguars, pumas, ocelots, ocelots, moor cats, a variety of monkeys, pythons, anacondas, giant caimans , deer, parrots and royal hawks.

One of the best tourist places to visit in Manaus is the Tupe beach or Praia do Tupé, 34 kilometers from Manaus. This place ranges from 20 to 80 meters wide depending on the water level of the Negro River, which depends on seasonal rains.

This beach can be accessed in two ways: by boat from Manaus or by road. This long stretch of white sand holds the official seal of “Sustainable Development Tourism Site”.

With controlled river access (the number of boats arriving at Praia do Tupé is limited on weekends and holidays, when it is usually more frequented) and with several initiatives that promote ecotourism.

It is considered the best beach in Manaus. It is located on the left bank of the Negro River, 23 km from the city. It has a crescent shape, very fine white sand and is surrounded by exuberant vegetation.

Praia da Lua is accessible by boat. It is a short 10-minute drive from Marina Davi. The Marina Davi can be reached by buses of the municipal service entitled “Special to the Marina”.