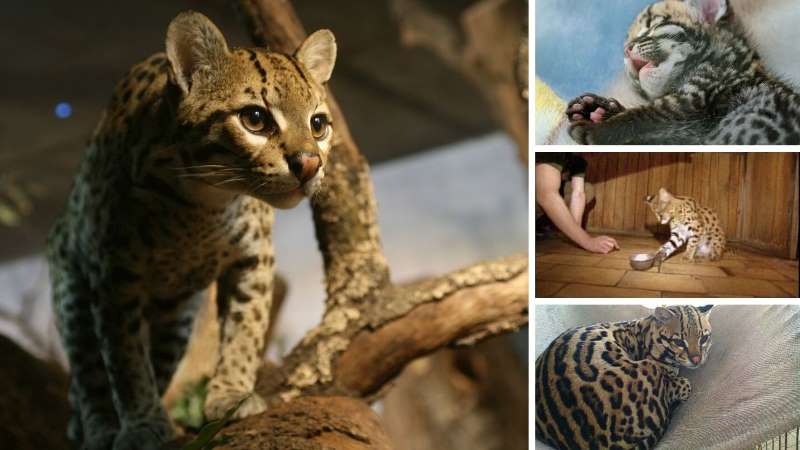 How to identify it? Feeding, habits and reproduction (baby ocelot), Mexican ocelot.

It is also known by other names in different regions of the Americas, such as jaguarcito in the Chaco region, manigordo in Costa Rica and Panama, tigrillo in Colombia, cunaguaro in Venezuela, gato montés in Bolivia, jaguantirica in Paraguay and gato onza in Brazil.

Characteristics of the ocelot

It is a feline between 40 and 55 centimeters tall and weighs between eight and sixteen kilograms.

Their large eyes vary between yellow and brown depending on light changes.

The ocelot’s legs are quite short and strong, with pads that allow its steps to be silent.

Their coat is short and soft, with variable colors ranging from yellow in forest areas to grayish tones for those living in drier regions.

The ocelot is a feline that, due to its adaptability, managed to escape extinction as well as the predators and poachers that constantly stalked it.

It has an elongated and well-built body, erect and rounded ears, of medium size and typical of the continent.

This feline is not easy to find.

It is a carnivorous feline of nocturnal habits, solitary and extremely protective of its territory; during the day it hides in the vegetation or in the branches of trees.

As for its diet, this feline relies on its senses, especially its hearing and sight, to stalk possible prey, hiding or even attacking them by surprise, given its climbing agility.

Its diet essentially consists of small and medium-sized mammals, as well as reptiles, birds and rodents. It is also a good fisherman and frequently consumes turtle and other reptile eggs.

Among them and in a very eventual way there can be cannibalism, so it is possible to establish that it is a highly specialized feline and adapted to its environment, depending on where it is established.

Its sense of smell is highly specialized, which it uses to analyze possible prey. By means of complex chemical processes, the ocelot can analyze the air for urine or other chemical traces of animals of the same species, and through these emissions and chemical detections can effectively establish communication announcing its presence, as well as informing itself of the presence of other felines or potential predators.

The size of its territory, given its solitary condition, covers up to thirty square kilometers and this size will vary depending on the type of environment that surrounds it; males have much larger territories than females.

They communicate with each other by means of subtle meows, but when searching for females for reproduction, their meows become much more intense.

How does the ocelot move?

It is commonly believed that the ocelot is constantly active for up to twelve hours a day, during which time it can travel more than fifteen kilometers, the males being more active than the females of the species.

Reproduction of the Ocelot

The territory of a male usually includes two reproductive females with which he has the opportunity to copulate and mate, being a polygamous species. Its reproductive season occurs once in a period of approximately two years.

Females of this species have between two and four young after an average or estimated gestation period of seventy to eighty-five days.

The female usually gives birth in a cave or a shelter she selects, constantly changing location to avoid being found and killed by other predators. The lactation period of the young is estimated between three and nine months, acquiring maturity between eight and ten months.

The offspring will spend an estimated one year with their mother until they become fully independent.

The Leopardus Pardalis or Ocelot was, until the year 2000, considered an endangered species. Today it is catalogued as a species at low risk. The main threats to its existence are the invasion of its habitats, the loss of territory, poaching for the commercialization of its skins and for the illegal sale as an exotic pet, and also by being killed for the protection of domestic animals.

Like all animals, the ocelot is threatened by other predators, such as the jaguar and the puma, as well as birds of prey, such as the harpy eagle, and also the constant threat of the anaconda and other large reptiles.

The ocelot in ancestral cultures

This is one of the felines, besides the jaguar and the puma, that has been represented throughout the centuries by the Native Americans in their different artistic manifestations.

It exists in the art of many of the cultures of the pre-Columbian American civilizations.

In Mesoamerica these felines were represented in all cultures since the Olmecs, who represented them in stone and jade.

In the Mayan culture, these felines were icons to represent war, sacrifice and leadership power; their fur was reserved for the clothing of the warrior kings, as well as being distinctive features for the warriors in the murals of Bonampak.

In archaeological sites, remains of Mayan kings have been found with ocelot skins, fangs and claws, so we can infer the importance that this feline had for these cultures throughout the territories where it was found.

The importance of this feline as a symbol of prestige and power within these cultures is evident in the related ancestral stories and legends.