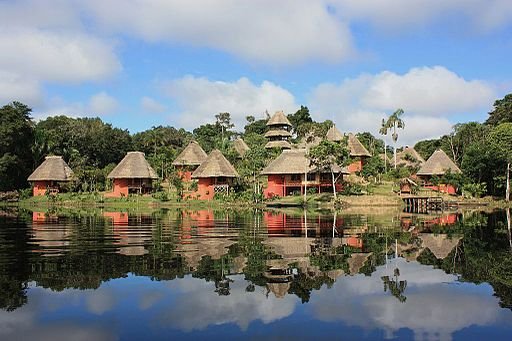 Spending a vacation in eastern Ecuador will be an experience you will never forget, because there you will find a dense jungle full of wildlife, beautiful waterfalls, parks, and lakes.

Where you can go from quiet walks in the company of family and friends to extreme activities, if you are passionate about adrenaline.

Join us to discover the most impressive and unique tourist places in the Ecuadorian Amazon region , so come on, continue reading!

✅ Tourist places of the Ecuadorian East

At first it is appropriate to mention that knowing the Amazon from Ecuador is a great option, since it is cheaper than doing it, for example, from Brazil, this is undoubtedly another point in favor.

Among the main attractions of the eastern region are:

The Amazonian province of Napo has beautiful landscapes, impressive waterfalls, ancient cultures and sites surrounded by forests that allow visitors to carry out adventure tourism activities.

Among the tourist places in Napo we can mention the Hollín Waterfall, the Papallacta Hot Springs and Lagoons, the Misahualli Port , the Jumandi Caverns, the Islands Park and the Jatunyaku River.

The city of Tena is located between the Tena and Pano rivers, which make up resorts such as Rancho Alegre, Cocha del Cementerio and Dos Ríos. It has a botanical garden in the middle of the city, called “Parque Amazónico”, ideal for environmentalists.

It is located in the province of Sucumbíos, it is one of the most biodiverse places on the planet. About 450 km long and 150 km wide, the park encompasses 590,112 hectares of mostly pristine jungle.

In addition, this reserve has more than 50 different species of birds ; 60 orchids; 350 species of fish , a wide variety of reptiles and some 12,000 species of plants .

The Yasuní National Park has an extension of 9,820 km2 of exuberant tropical jungle. This park is bordered by two majestic rivers that feed the legendary Amazon River and form a kind of alligator’s head, with its huge gaping jaws.

Yasuní National Park is one of the most biodiverse places on earth, where adventure lovers will have direct contact with nature at its best.

From Yasuní you can explore the tropical jungle or appreciate the forests from the observation towers built in the lodges, and discover for yourself the almost 600 species of birds in the reserve, which represents a third of all those that inhabit the region. Amazon.

Likewise, as you paddle your canoe through blackwater streams and lagoons, you’ll notice that the Park is home to approximately one-third of the Amazon’s amphibian and reptile species.

And as if that were not enough, a famous mammal lives in this area: it is the pink dolphin , a friendly and intelligent animal that enchants at first sight.

The most important tourist places in the Pastaza province and its capital Puyo involve ecological walks on well-kept trails, observation of wild animals typical of the Amazon , rivers and waterfalls nestled in the humid tropical forest.

In addition to modern installations of artificial waves, pools and slides, dammed rivers in the form of dams, among others.

Within the tourist places of Puyo-Pastaza we can mention the Morete Puyo Water Park, OMAERE Ethno-Botanical Park, the Hola Vida waterfall, the Las Orquideas Botanical Garden – The Puyo Orchid Garden.

As well as the Puyo River Tourist Walk, the Puyo Ethnic and Archaeological Museum, the Royal Park – Exhibition of exotic birds and the Los Monos walk.

✅ Adventure tourism in the Amazon

Dare to enjoy extreme tourism in the canton of Tena, considered one of the best places for adventure sports in whitewater.

More than 20 tour operators are located in Tena and Misahuallí, which offer unforgettable experiences on the Jatunyakum river for kayaking and rafting ; or Bajo Misahuallí for those who want to experience greater emotions.

In addition, in Misahuallí Port, navigation is offered through the waters of the Napo River and the possibility of visiting Aucas or Huaoranis communities, in the midst of the flora and fauna of the jungle.

This protected area includes the Limoncocha lagoon and nearby areas. It has primary and secondary forests.

Birds constitute one of its main riches, with around 350 species, as well as reptiles and mammals .

It is known for being the habitat of the black caiman . Access is through the city of Nueva Loja.

✅ Waterfalls of the Ecuadorian East

The charm of the Ecuadorian Amazon allows us to enjoy one of its most impressive wonders such as waterfalls.

Throughout the region there are several such as the San Rafael waterfall, with a height of 150 meters and 14 meters wide, it is the highest and most spectacular in all of Ecuador.

It is located in the transition zone between the Andean mountain range and the Amazon region of the country, it is part of the “Sumaco Biosphere Reserve ” granted by UNESCO, only to protected areas of great cultural and natural value, and as such contains a very high diversity of species of flora and wildlife .

On the road from Puyo to Macas , there is a waterfall called “Mystery of the Gods”. Legend has it that rites were performed in its waters in honor of the mythical gods.

Nearby is also the “El Porvenir” waterfall, a short distance from the town of the same name.

The Ecuadorian Amazon offers its visitors an endless number of tourist places to visit, whether you are traveling as a family or in search of adventure, there are a variety of options, both in tours and in hotels.

We hope these recommendations of tourist places in the Ecuadorian Amazon will help you when planning your trip. So don’t wait any longer and visit one of the most extraordinary places on the planet.