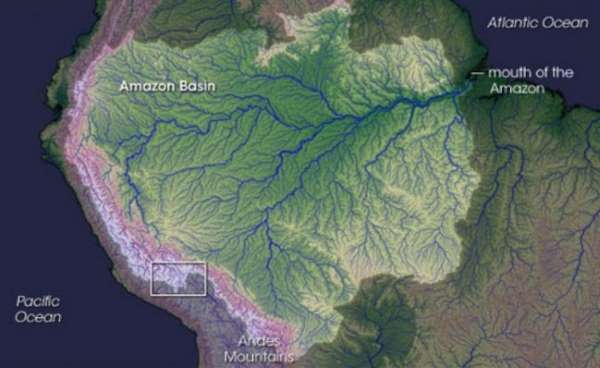 The Amazon basin is a territorial area delimited by the dividing line of the waters of the numerous rivers or tributaries that are channeled towards the Amazon River, which functions as a collector to take or drain them towards the Atlantic Ocean.

A hydrographic basin is larger, where the river that forms it is longer and mightier. That makes a basin like the Amazon River so important and extensive.

…is the longest and mightiest on planet earth?

The Amazon is not simply a great river, nor is it the only one that makes up the basin, despite its great importance.

The Amazon is arguably the most important river on the planet.

Importance of the Amazon Basin:

The Amazon River is joined by the waters of the Orinoco River , the fourth largest in the world, through the arm or Casiquiare River, which connects with the Negro River, and the latter with the Amazon.

These two mighty rivers, the Amazon and the Orinoco, form the Amazon-Orinoquía basin, which houses more than 15% of the total fresh water of the entire Earth.

More than a thousand tributary rivers, of different flows, are incorporated into the Amazon, making it the main water collector of a vast basin of more than 7 million km2.

The artery of the Amazon River feeds 8 countries!

The Amazon basin extends from north to south, between the Guianas and Brazil; and from east to west, from the Atlantic Ocean to the Andes mountain range.

The population of the Amazon basin according to the data gathered the year 2013, surpassed the 24 million people.

It is interesting to bear in mind that, of the total population, only 878,000 inhabitants were indigenous , that is, 3.63%, organized into 385 indigenous groups.

These figures debunk the widespread belief that the Amazon is inhabited mostly by indigenous people.

The largest portion of the basin’s surface corresponds to Brazil, with 4,982,000 km2, but barely 125,000 indigenous people lived there.

The largest concentration of indigenous population is found not in Brazil, but in Peru, with 332,975 indigenous people, followed by Ecuador, with 146,000.

If we take into account the territorial extension of the basin using the hydrographic criterion (there are other criteria: geopolitical, geomorphological, geographical, ecological), we find that, of the total area of 7,584,421 km2, the most Amazonian countries are: Brazil (representing 67.79% of the extension of the basin) followed by Peru , with 13.02%, and Bolivia , with 11.20%.

Together, these three countries occupy 92% of the total area of the Amazon basin.

Characteristics of the Amazon River

As we clarified at the beginning of this article, the Amazon River is the longest and mightiest river in the world. But how do we compare?

Most of its route, 47.3%, goes through the brazilian territory, but it also crosses other countries such as Peru and Colombia.

The Amazon is the river with the largest flow, which is the amount of water it carries, measured at a given point and time.

The largest flow of the Amazon is 225,000 cubic meters per second, in the flood or rainy season, exceeding by more than five times the river that follows: the Congo, with 41,800 m3/sec.

Where does the Amazon River start?

The Amazon River is born in the Mismi snow-capped mountain, at 5,597 meters above sea level, in the Rumi Cruz mountain range, located in the Arequipa region of Peru.

The waters of two streams, Cashuasanta and Apacheta, come together to form a thread of water that comes down from the mountains, winding and receiving tributaries along its course, which increase its flow.

Arriving at Nauta, a river port that communicates by water and by land with Iquitos, capital of the Peruvian region of Loreto, two great rivers, the Ucayali and the Marañón, both born in the Peruvian Andes, come together to form the great Amazon River, which continues to grow.

Affluents or tributary rivers of the Amazon

In its long course, the Amazon River receives more than 1,000 tributaries.

One of them is the Negro River , with 2,250 km in length, considered the largest blackwater river in the world, and the largest river that is tributary to it from the left bank, emerged in the northern hemisphere.

Another great tributary is the Madeira River, with 4,307 km, born in the southern hemisphere, which is tributary to it on the right bank.

Width of the Amazon River

The width of the Amazon River at its narrowest point and in the dry or low season is from 1.6 to 10 km, but it can exceed 40 km during the rainy season or when the river rises.

Along its path, the river receives various names, such as Solimoes in Brazil, but the most generalized name is Amazonas, which comes from the time of its European discovery by the Spanish captain Francisco de Orellana in 1542.

Gaspar de Carvajal, chronicler and chaplain of the aforementioned conqueror, said he had seen warrior women on the shore, armed with bows and arrows.

That vision reminded him of medieval stories about warriors without a breast (am: lack of a breast), natives of the Caucasus, who inhabited the Euxine Pontus, on the shores of the Black Sea.

The Amazon continues its long course, flowing almost parallel to the equinoctial line, which makes its course almost straight, slightly sinuous, in long stretches, unlike its more sinuous tributaries.

Where does the Amazon River flow?

This is how it goes until its mouth in the Atlantic Ocean, at the height of the Equator. At the mouth, it forms an immense delta, which has a distance from one shore to the other close to 300 km.

560 islands in the Amazon Delta!

There it forms a large island, Marajó, one of the 560 islands it creates, with 40,100 km2, located in the Brazilian state of Pará, which has become an important Brazilian tourist destination, located 80 km from Belem.

Surfing in the Amazon River?

When it empties, the Amazon creates a phenomenon known as “pororoca”, a word derived from pororó-ká, “great noise” in the Tupi-Guarani language, which is a violent tidal wave, with an average flow of 176,000 m3 per second, which penetrates in the ocean with a thunderous roar, forming waves up to 6 m high, between September and April, at a speed of 15 to 25 km per hour, which has become famous for surfing.

Fresh water in the Atlantic Ocean

The entry of the Amazon into the ocean turns brackish water (a mixture of fresh and salt water) up to more than 100 km into the ocean.

What is a basin?

A basin is a territorial area delimited by the dividing line of the waters, which are channeled towards a single outlet, which functions as a collector to take or drain them towards the sea or towards a single endorheic lake (where the water has no significant outlet by drainage or by infiltration, and the water must evaporate on its surface).

Main tributaries of the Amazon River from A to Z: classification by water color (RAN, RAM, RAC, lotic and lentic rivers).