The history of the bullet ant is connected with the northwestern Amazon, with the Sateré Mawe, the production and consumption of guaraná, and of the ritual of passage of this indigenous ethnic group.

The ant Paraponera clavata has one of the most painful insect stings in the world, but not the most lethal.

Its intensity, classified at the highest level on the Schmidt scale in the perception of insect sting pain, corresponds to an almost unbearable pain, which sometimes even causes the affected person to lose consciousness.

The effect of the neurotoxin involved, poneratoxin, is used by members of the Brazilian Sateré Mawé ethnic group as a test of courage and physical endurance in the rite of passage from adolescence to adulthood.

The Sateré Mawé inhabit a vast area of the Brazilian Amazon, shared by the states of Amazonas and Pará.

This ethnic group is known for being a pioneer in the treatment and consumption of guaraná, the ingredient of Brazil’s most popular energy drink, and also for its expertise in the production of fine handicrafts.

Vernacular names of the bullet ant and their meaning

The bullet ant (Paraponera clavata) has many vernacular names, some related to the intensity of the insect’s sting.

Bullet ant is its most popular name in Mexico, Costa Rica, Peru and Uruguay, because its sting produces in the affected part the intense burning sensation of a bullet shot when it enters the victim’s body.

Others call it ant 24, alluding to the fact that the effects of the sting persist for at least 24 hours, or a full day.

In Colombia and Ecuador they call it conga.

Presumably because of the insect’s characteristic black color, in Brazil it is known as tocandira or tocantera, and in Bolivia tucandera.

Other names are used in various Amazonian regions, such as formigao preto or tocanquibira (in Brazil), buka (in Bolivia), sapanquira, isula (Peru), yanabé (in Colombia), hormiga arriera (in Mexico).

Names beginning with tocan- (such as tocandera, tocandra, tocanquibira), or tucan- (such as tucandera, tucandira) are probably derived from tuca-ndy, which means in Tupi-Guarani “that which wounds deeply,” and are Portuguese language names.

In English the ant is known as bullet ant or conga ant .

Geographic origin and habitat of the bullet ant 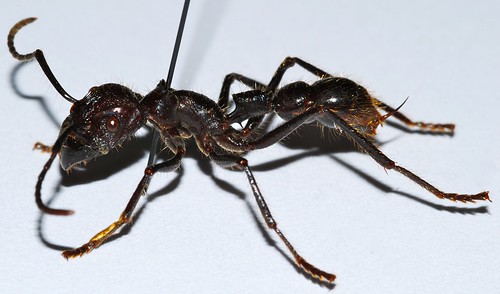 The bullet ant probably has its center of origin in the Brazilian Amazon, although it is widely distributed from Brazil to Mexico.

It is abundant on the Atlantic coast of Central America, and in some countries of the Amazon basin such as Bolivia, Brazil and Venezuela.

Some say that this species is native to Central America and southern Mexico. Others from South America.

It is known to inhabit riverine or rainforests at low altitudes, up to 750 meters above sea level, generally located in the Amazon basin.

The bullet ant is a hymenopterous insect of the family Formicidae, which is the only living species of its subfamily.

Formicids are a family of social insects that belong, along with wasps and bees, to the order Hymenoptera.

They evolved from a wasp that lived in the mid-Cretaceous, about 110 to 130 million years ago.

The ant has an exoskeleton, an external covering that operates as a protective shell.

Its body is divided into three well-defined body segments:

In addition, the ant has six legs anchored to the mesosoma.

In each colony, which is of long duration, live several hundred individuals distributed in three classes: the worker ants, the males and the queen .

They are thick, reddish-black, wingless ants.

They are not aggressive, unless they feel harassed or have to defend their nest, which they do fiercely, while emitting a shrill sound.

They are infertile females, in charge of collecting food and defending the anthill.

The males are endowed with wings and are responsible for fertilizing the eggs from the queens.

They do nothing but eat and mate, and live only a few weeks .

The queen is the largest in the anthill and has wings, which she loses after the nuptial flight.

In each anthill there are one or more queens.

The queen is in charge of laying the eggs, from which the different elements of the anthill are born.

They form colonies of up to 500 ants, but they usually gather in groups of 10 to 20 individuals.

They feed on insects, leaf exudate and sap.

Herrera-Guevara (2016) reports that a coffee pulp treatment was used to eradicate bullet ants in plantations located in Moyobamba, San martin, in Peru.

Reproduction of the bullet ant

Reproduction is sexual and has the following characteristics.

Fertilization takes place in the air, in a process known as nuptial flight.

The queen takes flight, followed by the male who seeks to impregnate her.

If the egg is fertilized, the offspring will be female (diploid). If it is not fertilized, it will be male (haploid).

Once fertilized, the queen loses her wings.

The queen isolates herself in a small chamber that she digs inside the nest, where she lays her eggs and remains enclosed until the following year.

The queen is self-feeding. The eggs are white, about 0.5 mm long.

Once the first worker ants are born, they are in charge of foraging for food for the queen ant.

The life of an ant begins with a single egg.

Ants develop by complete metamorphosis, i.e., they are holometabolous: larvae go through a pupal stage before becoming adults.

The larva remains practically immobile while being fed by the workers, who deliver the food by trophallaxis: the adult ant regurgitates liquid food from its stomach to share it. And it also provides them with solid food.

Formicids communicate with each other by means of pheromones.

In this way they provide information to the other ants in the colony so that they can follow the trail to the food source.

The trail has been marked with chemical signs indicating the direction and intensity of the odors.

If the food source is depleted, they no longer emit pheromones and the trail disappears.

Pheromones also serve as an alarm signal when they are attacked.

The sting of the bullet ant

The bite of Paraponera clavata is the most painful bite among all insects.

The sting of the bullet ant is said to be up to 30 times greater than that of a common bee or wasp. Similar, they say, to the intense burning pain produced by a bullet wound.

The pain provoked is very intense.

Entomologist Justin Schmidt, after being subjected to many bites from various insects, created a scale to measure such pain.

It is a table that goes from 1 (insect sting, such as a sweat bee, which is light and ephemeral) to 4 (tarantula wasp sting), and its highest point, 4+, which corresponds to the bullet ant sting, which is equivalent to walking on burning coal and with a 5 cm nail stuck in the heel of the foot.

It is a very strong stinging bite that causes pain in the affected area, inflammation, body trembling, sweating, nausea, fever, tachycardia, numbness in the affected limb and consequent paralysis.

But, despite the immense pain it causes (the name parapona comes from the Greek word for pain), it is not fatal.

Specialists estimate that, to be fatal, it is necessary to have received 30 stings for each kg of weight of the affected person. That is, it would take about 2,220 to 2,250 stings to kill a person weighing about 74 kg.

The poison that produces the great pain of the sting is the neurotoxin called poneratoxin, described in the 1990s, when research was being done on natural substances from which insecticides could be obtained. 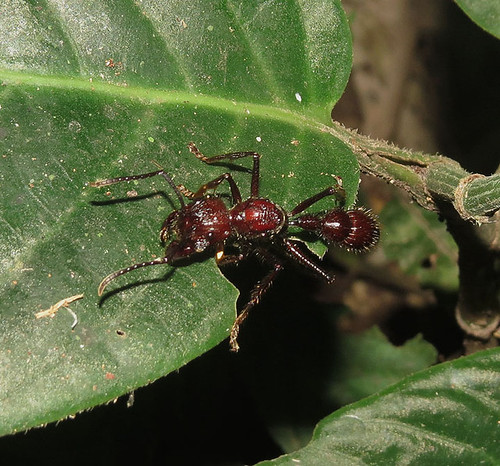 This venom is a paralyzing neurotoxic peptide, which alters sodium ion channels and blocks impulses in the central nervous system of insects. Formic acid, when in contact with air, produces a semi-solid, amorphous, yellowish, water-soluble substance.

A rite only for the brave!

The rite of passage of the Sateré Mawé ethnic group is a test of physical endurance that indigenous youth undergo in order to pass from adolescence to adulthood.

For this purpose, two gloves made of vegetable materials are prepared.

In each glove the shaman places about 50 ants, which, in order to manipulate them, he has previously lulled to sleep with an infusion of herbs.

Then, the shaman wakes them up with smoke.

The young man puts his hands into the gloves, and the ants begin to sting him, causing him almost unbearable pain.

The youngster must endure the stings for a while, about ten minutes, which must seem like a century. The pain is so severe that some lose consciousness.

The bullet ant as punishment

Merino-Serkovic (S.f.) refers to several stories from the Amazonian Andes, focusing his attention on the Monzon valley in the San Martin region.

There lived the Cholones, between the Tazo and Mixiollo rivers, who exploited salt mines (which disappeared around 1704).

When an indigenous person transgressed the rules of the village, they made him or her eat isula ants(Paraponera clavata), which were usually deposited in a pot of huingo (Crescentia cujete).

The Sateré Mawé are one of the indigenous tribes of the Brazilian Amazon region, inhabiting the middle stretch of the Amazon River, between the states of Amazonas and Pará.

They are well known for: