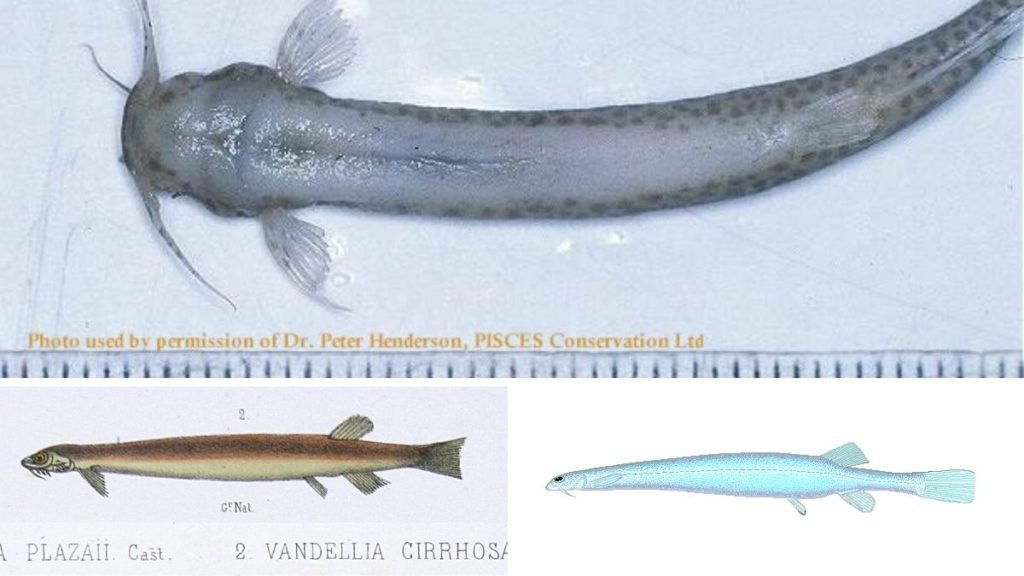 The canero ( Vandellia cirrhosa ) or candirú, which is the name used in Brazil and in the lower Amazon, is an unusual fish in the Amazon, especially because of its behavior.

Its body is almost transparent, elongated, about 2 to 5 cm long, and almost 4 mm wide, and it has the ability to enter the cavities or orifices of the body of its victims to suck their blood.

The candiru is a fish with such a particular activity that some zoologists have proposed calling it Urinophilus diabolicus.

➡️ The attack of the candiru

The indigenous people say, some call this belief indigenous myths , that if men urinate when bathing in fast-flowing rivers , the fish enters through the orifice of the penis until it lodges in the urethra.

There, they fix themselves on the walls, with a kind of hooks that their body has, to feed on the blood of their victims. These hooks or thorns prevent or hinder their removal later.

It also happens with women, particularly when they have menstruation. The candiru or canero is inserted into the vagina, probably attracted by the smell of blood.

➡️ Symptoms of candiru in humans

The problem caused by the candiru is very serious, because the affected person suffers from great pain , which only goes away when this “vampire fish” is removed from the parts where it has settled to feed.

And there is no way to remove it if it is not by surgery, which has been applied on the few occasions that have happened, as happened with a young man in his twenties who was bathing in an Amazonian river, in October 1977, when he suffered the mishap, and It is also the only known case.

The first record of a naturalist about the canero or candiru was made by the German traveler Carl Friedrich von Martius (1794-1868).

From then on, the canero was mentioned in many traveler’s stories from the 18th and 19th centuries, in which there was almost always a lot of fantasy.

➡️ How to protect yourself against this vampire fish?

The natives insist on the danger of the fish, and fear the action of the canero. And rightly so, it is to be feared. The indigenous men bathe in the river taking some minimal precautions: they bathe with their backs to the current, covering their penis with one hand and their rectum with the other.

Others use a kind of fabric, made with palm leaves, that completely wraps their penis, while they cover their behinds with their hands.

They also protect themselves using a kind of suspensory made from coconut shells, or the bark of certain trees.

Women bathe by covering their vagina with palm tissues. And they don’t bathe during the days when they have their period.

Some fearful tourists use condoms to protect themselves , never going completely naked into river waters.

Traditional indigenous medicine uses the juice of the leaves of a wild plant known as xagua, jagua, caruto, genipa, of which little is known with certainty about its properties to eliminate the perverse effects of the aggressive fish.

It is probably the jagua or huito ( Genipa americana ) , which is a tree of the Rubiaceae family.

Healers claim that its juice separates the candiru or canero from the victim’s genital canal , dissolving it. Some even point out that it is necessary to insert small pieces of the fruit to heal or drink hot infusion made with the fruit.

The huito is a tree, 10 to 15 meters high, with a straight trunk about 80 cm in diameter. It produces fruits, smooth ovoid berries, acute at the ends, rich in tannin, but which are, however, edible.

Inside it has a juicy pulp, and a sweet and sour taste. Various parts of the plant are used for medicinal purposes.

The seeds, ground and mixed with water, are used as an emetic. Its fruits are used to calm diarrhea, asthma and cough. An infusion is made from the bark that is used to cure internal bleeding.

The most comprehensive review study I know of on canero and its effects was done by IL Bauer in 2013.

The conclusion reached, after an exhaustive review of the related literature, is that there is no evidence that the canero is attracted by urine, or by any other similar substance, or that it has attacked humans when they bathe.

The only reported case was the one that occurred in 1997, but the testimony of the “victim”, according to Bauer, is full of inconsistencies and is not reliable, because it indicated that the fish jumped out of the water and ascended through the column of its urine until it entered the his penis.

Bauer points out that even if the candiru could accommodate itself in a urethra, it could not survive there, without oxygen and without space to “swim” for no more than a few minutes: the fish “definitely cannot make its” home “in there.” ” (Bauer 2013).

Despite the widespread belief among indigenous people that this vampire fish gets into the holes of the penis, vagina or anus of bathers in rivers with strong currents, there are not many known cases in which accidents of this type have been recorded. between human beings.

But it is common that they occur with fish and other aquatic animals : the candiru enters their gills or gills, which are the respiratory organs, parasitizing them to feed on their blood.

➡️ The only vertebrate that parasitizes the human being

But, what is the canero or candiru?

This “vampire fish” has the sad reputation of being the only vertebrate that parasitizes man.

However, it is hardly studied by specialists, due to its minimal occurrence and because it differs greatly from the many types of diseases that are transmitted to man through animal agents, which are known as parasitic zoonoses.

But it can happen.

The candirú is a small, thin and elongated fish, widely distributed in all regions of the extensive basin .

Due to its very particular characteristics, it becomes practically undetectable in the water of the Amazonian rivers with strong currents.

It belongs to the Siluriformes order, and to the Trichomycteridae family, which identifies it with the catfish, which many of us know, and which are species with smooth skin, devoid of scales, whose meat is highly valued for human consumption.

➡️ The canero as an ornamental fish

There are several species of fish very similar to the candirú, which are captured in Amazonian rivers to be marketed and exported as ornamental fish.

Perhaps the canero or candirú is among the fish exported for this purpose.

The issue of the so-called “vampire fish”, which perhaps acts as the avenging fish on behalf of the catfish we eat, has been little studied by medical science (PAHO 2003), because There are few, very few, cases in which genital parasitism has been verified with certainty due to the action of this impertinent little fish that produces so much terror, perhaps unjustifiably, among tourists who visit the Amazon and bathe in the rivers of the basin .

Bauer (2013) points out that the threat of the candiru does not warrant tourism agencies taking special precautions to assist tourists traveling to the Amazon.

Main tributaries of the Amazon River from A to Z: classification by water color (RAN, RAM, RAC, lotic and lentic rivers).

Discover everything about the longest and mightiest river on the planet: where does it start? what is the origin of its name? Where to surf in the Amazon River? and more.