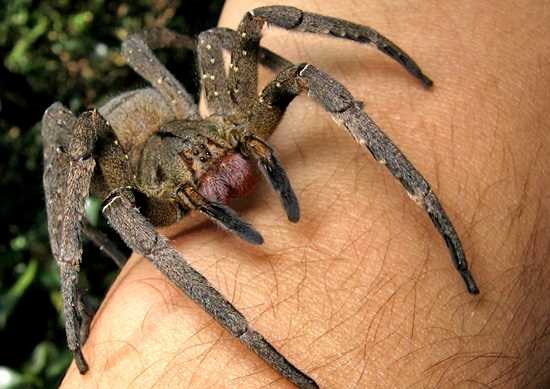 The banana spider(Phoneutria nigriventer), or banana spider or banana wandering spider, is probably the most venomous spider in the world and is one of the spiders of the Amazon.

Its name comes from the fact that it is frequently found in banana plantations, and it is widespread throughout Central and South America, whose economies are closely related to banana or plantain exports.

Although it can be found in other areas, such as northern Argentina and Uruguay.

There is a spider species that competes with it in terms of venom potency, Phonetria phera, of the same genus, but it does not cause as many victims as P. nigriventris.

The banana spider, which Brazilians call araña armadeira and which causes terror in the Brazilian Amazon, is fearsome not only because of its venom but also because of its appearance.

Its head and abdomen measure up to 5 cm, but its legs extend up to 15 cm. It is as large as the palm of an adult person.

It has four eyes: two large eyes at the front of the head, and two smaller eyes. It has two reddish “tusks” and eight large, hairy legs. It is very fast and aggressive, but only attacks when it feels threatened.

Where does the banana spider live and what does it eat?

It likes to live in dark places, and feeds on insects, especially crickets and flies.

Their venom, the toxin, can be fatal to an adult person. Its victims feel, immediately, great pain, intense sweating, strong tachycardia, progressive asphyxia, which can lead to death by cardiac arrest.

It does not produce necrosis of the affected part. The only spider that does this is the violin spider (Loxosceles reclusa), but its venom is more potent and lethal.

Its effect is another, which has attracted the attention of the scientific world: it produces priapism, that is, a prolonged erection, which can be maintained for more than four hours, and even up to 12 hours.

As a result of these effects, if the victim is not treated in time, he dies, but with an erection that creates unbearable pain, because it interests the cavernous vessels, leaving the glans soft.

Other effects of banana spider bites

Antimicrobial peptides are substances whose molecules produce effects on the innate immune system, forming part of its defense mechanisms.

In the case of banana spider bites, the venom increases the levels of nitric oxide in the blood, increasing blood flow.

The peptide induces relaxation of the spongy tissue and facilitates the distribution of blood flow to the penis or clitoris of the victim, resulting in erection.

This effect has been studied by Brazilian researchers since 1987, particularly at the Ezequiel Dias Foundation (FUNED), which operates in the state of Minas Gerais.

They, and others who have joined the research, believe that there are possibilities of obtaining a drug to help combat erectile dysfunction, or sexual impotence, which affects so many people in the world, and that it may be a better alternative to Viagra and similar drugs.