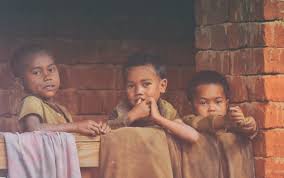 When comparing the daily nutrition of indigenous groups and its relationship with main sources of subsistence (10), i.e. hunting, fishing, the chacra, and collection (hunting-gathering), we find that out of a total of twelve indigenous ethnic groups, four indicated that their main subsistence activity was hunting, none indicated fishing or gathering, and eight indicated farming.

Fishing was not indicated as a main source of subsistence, but seven indicated that it was the second-most important activity.

Sweet cassava and bananas are used for rituals and in the making of a local drink called masato or chicha.

The diets of indigenous peoples presented satisfactory caloric and protein levels until the 1980s, according to the World Health Organization which recommends a daily caloric intake for an adult between 2,131 and 2,370 Kcal, and 37.9 g of protein.

Research by anthropologists in the Amazon showed that the average caloric intake in selected indigenous groups ranged from between 2,215 Kcal for the Siona-Secoya of Ecuador (1) and 3,356 Kcal for the Awajún or Aguaruna of Peru (2).

Protein consumption varied from between 68 g for the Yanomami of Venezuela (3) and 104 g for the Campa of Peru (4).

Until the 1980s research showed there was no serious malnutrition problem in the Amazon forest (5).

At that time, there was a close relationship between the indigenous communities and food sources from the forest, because hunting, fishing, and the gathering of wild fruit was commonplace.

Commercial food purchase and market activity created new pressures on the labor force and natural resources, changing the relationship between the indigenous community and the environment.

Beckerman (9) states that the size, permanence, and density of indigenous settlements depended largely on the abundance of protein-rich foods.

This situation is not unusual in the Amazon, particularly in places located near urban centers or influenced by retail outlets. Increased consumption of industrially processed food products such as bread and crackers, sugar, salt, industrial pasta, tuna, canned sardines, and vegetable oil is frequent.

Causes: an unfavorable integration of traditional and modern.

The harmonious relationship of the indigenous people of the Amazon with nature became unbalanced over time due to various factors.

The most important factor was increased contact of indigenous people with urban centers and retail markets, which strongly influenced their indigenous diet.

Markets created opportunities to sell agricultural and animal products and expanded indigenous peoples’ daily diet with new products. However, they changed its quality in the process.

The jobs available tended to be low quality and informal, without benefits or guarantees. A marketing network was created that turned indigenous producers and consumers into marginalized and disadvantaged participants in the capitalist market.

The indigenous people who bring their products to market end up selling them at a very low price to the local merchants, who collect products on the riverbanks, at the landing sites, and at entrances to the municipal markets, increasing their profits with large markups.

Consequence: a decreased quality of life.

In this way, “a chain of perverse economy is established that works without much rationality, with low levels of profitability, and which moves by dint of unfair low prices for those who sell, and almost wholesale auction prices for those who buy,” all in a system where much intermediation is involved (6).

Anthropologist Anne Roosevelt (8) pointed out that within these indigenous communities there were great inequalities in the distribution of food. These harmed children, the elderly, pregnant and lactating mothers, and benefited the adult male population.

One very important solution is farming a variety of crops in the indigenous chacra, thereby reducing the vulnerability of crops to pests, diseases, and climate change.

Specialists observe that among options, horticulture including the chacra and family garden offers the greatest stability and regularity. Other food-sourcing activities are unpredictable to varying degrees.

Carbohydrates are the main sources of energy for indigenous people, and these come largely from farm-cultivated crops.

There is an interesting relationship between a sedentary lifestyle and the availability of food resources.

On one hand, this lifestyle exhausts resources due to overuse. Large mammals are driven away; however, smaller mammals are not. Also, these reproduce quickly and prowl near settlements in search of food.

The opposite happens with fishing. Fishing resources are hardly affected by their relative “immobility” near a settlement site, if fishing is done in moderation without overexploitation.

Periodic displacement or migration of a settlement site allows recovery of both natural soil fertility and animal reproductive activity.

This includes small-scale raising of domestic animals, and the spread of fruit thanks to the practice of eating fruit and throwing the seeds by the side of the road.

Fortunately, the raising of domestic animals (chickens, ducks, quail, pigs) has increased and there are more and more small, local enterprises for the development of fish farming. These are organized by cooperative associations.

In 2013 (11) some 800 indigenous families in the Peruvian Amazon were farming fish in ponds using technical advice. This resulted in increased per-capita fish consumption from 9 to 21 kg per year, along with improved annual family income.

It is hoped that indigenous families will participate more actively in defending the integrity of national parks and other protected areas, and also incorporate them into rural, academic, and ecotourism activities.

The anthropologist Dourojeanni (7) indicates that indigenous peoples who live in isolation, or who have little contact with population centers, have a better quality of life, higher spirituality, and a more harmonious relationship with nature.

By contrast, the most isolated communities can more adequately satisfy their food needs, especially protein, thanks to hunting and fishing, which are less overexploited in these areas.

8. Roosevelt, A. (Ed.). (1994). Amazon Indians. From Prehistory to the Present. Anthropological Perspectives. Tucson: The University of Arizona Press. Source