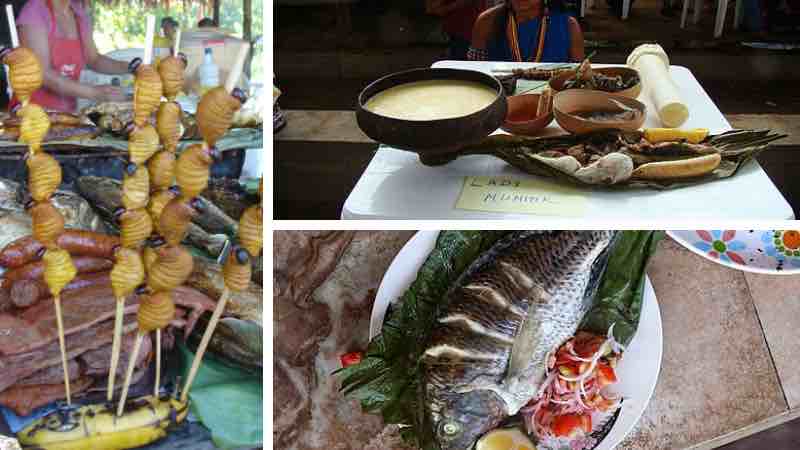 In order to study it better, the following aspects should be taken into account: geographical context, great chefs or exponents of Ecuadorian Amazonian gastronomy, and typical dishes.

The Amazon area covers an area of 120,000 km2, which corresponds to 43% of the national territory.

A few popular Amazonian restaurants operate in some cities. Only in one city, in Puyo, was there a restaurant of a certain category, Abaco, which operated for six years and is now closed.

That restaurant belonged to chef Juan José Aniceto, who later became the most important professional chef in the Ecuadorian Amazon.

Aniceto, who graduated in gastronomy at UTE in Quito in 2005, created the Ankukuna School of Gastronomy in Puyo, the pioneer in these activities throughout the Ecuadorian Amazon region.

From his school, and in the company of another great cook, André Obiol, who works in Quito developing his signature cuisine, Aniceto spent five years touring the region, gathering experience in direct relationship with seven Amazonian groups, of the ten existing peoples.

From the Ecuadorian Amazon to the world

From this intense anthropological work came a beautiful book, Gastronomía Amazónica, in 2020, co-authored with Obiol, his partner on the road and in trade, who acted as the manager of the project “Cocinas ancestrales de la Amazonía del Ecuador”, supported by the Universidad Estatal Amazónica.

In 2016 Aniceto participated as a guest, representing the cuisine of Ecuador, at Madrid Fusion, the most important culinary event in the Spanish-speaking world.

Aniceto is a cook in love with his trade and the Amazon region:

“More than recipes,” he says, “I’ve learned real life lessons and to look at my profession differently.

Over time, regional cooks have been trained, some of them belonging to indigenous peoples. This is the case of the young cook Tuna Nantipua, a Shuar descendant.

The Ecuadorian Amazon region is perhaps the best connected of all the regions that make up the vast Amazon basin, in terms of its interrelationship with the urban regions of each Amazon country.

This region has roads connecting several cities, such as Quito, Baños, Loja, Cuenca, with some Amazonian towns, which is unusual in the basin.

However, the Ecuadorian portion has suffered, on the one hand, intense deforestation and changes in the original landscape, which has worried the defenders of the rich biodiversity it contains.

On the other hand, it has suffered official neglect, which only began to be reversed when oil and gold were discovered in some Amazonian provinces.

Its great wealth of plants and animals, and its important indigenous cultural heritage, has been slowly changing the idea of extractive exploitation that has predominated in recent years.

Influence of tourism on the development of the Amazonian gastronomy in Ecuador.

In this sense, ecotourism has been gaining importance, giving more positive value to the region, especially its large protected natural areas such as the Yasuní Park and the Cuyabeno animal reserve.

Interest in local gastronomy has grown in parallel with the slow development of regional tourism , although it is not yet so remarkable.

However, there are some representative dishes, including, as two of the most popular, seco de guanta and ceviche volquetero, which do not correspond, strictly speaking, to the essence of what can be considered “traditional Amazonian gastronomy”.

Ceviche volquetero, for example, as Aniceto says, is perhaps the only traditional dish prepared with a canned product.

In this case, tuna, a sea fish, so different and distant from the jungle and Amazonian rivers.

Other dishes seem to be rather created under the influence of urban cuisine. This is the case of mushroom or palm heart ceviche.

Along with the seco de guanta, and the unusual preparation probably brought by the settlers which is the ceviche volquetero, with canned tuna, tomato, red onion, chochos, green plantain chifles and toasted corn, lemon juice, parsley, salt and pepper, we find dishes of great excellence such as maito, chontacuro skewer, grilled piranha and zarapa soup.

✅ + 5 typical dishes from the Amazon region of Ecuador

The seco de guanta is a stew prepared with one of the largest rodents of the Amazon. This is the Cuniculus paca, which is also found in other Amazonian countries, although it is not cooked in the form of stew.

The maito consists of a preparation with meat, which is then wrapped in a yaki-panga or bijao leaf(Calathea lutea), and roasted over a wood fire. It is made with guanta meat, or various fish, such as gamitana, also called cachama or tilapia, and even with chontacuro or chonta worm.

The ayampaco prepared in the southern Ecuadorian Amazon, which would be like a variety of Maito, under the influence of settlers from the Sierra, preparing it with chard, onion, and different types of meat: chicken, beef, pork or pork, and wrapped in bijao leaves.

The pincho de chontacuro or pincho de mayones is another of the most popular dishes in the region. It is the preparation of the chontacuro or palm worm, the larva of a coleopteran ( Rhynchophorus palmarum ), rich in fat and protein.

The worms, which are obtained from rotten chonta(Bactris gasipaes) trunks, are threaded on a skewer and grilled, seasoned with salt, to be eaten with rice and fried slices of ripe plantain.

Piranha or other important river fish such as cachama, tilapia or gamitana(Colossoma macropomum), presented as stuffed or grilled gamitana, are delicious preparations.

Aniceto praises the excellence of piranha roasted in the Waorani way, which is an Amazonian indigenous people , along with other preparations such as the Kichwa’s patasmuyo skewers, the Shuar’s chicha de chonta, and the Siona’s fariña de mandioca (cassava fariña).

Sarapa soup, popular in Tena, is another emblematic culinary preparation. It is made with a river turtle: Podocnemis expansa, known in Peru by the name of charapa, which is the basis for the preparation of the sarapatera or zarapatera of Loreto.