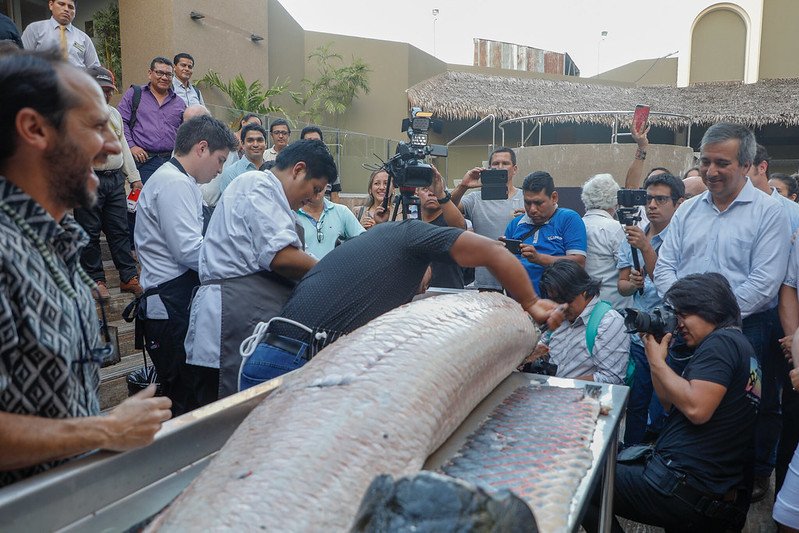 Peruvian Amazonian gastronomy can be studied taking into account five main aspects: its geographical context, its techniques, its ingredients, the renowned chefs or cooks dedicated to experimenting with these elements and, of course, the typical dishes of the region.

The Peruvian Amazon is the second largest in terms of extension, after the vast Brazilian Amazon. It is almost 783,000 km2, an enormous area larger than that of some Latin American countries, covering 71% of Peru’s territory.

In that part of the Amazon basin there are some cities, such as Iquitos, the most populated city in that region, Tarapoto, Moyobamba, etc. These cities have developed a gastronomic offer of great interest.

Apart from these cities you can get excellent Amazonian cuisine in the city of Lima, far from the Amazon. However, a distinction must be made between these two offers.

Lima’s, for example, is restricted to a few restaurants, some of very high quality. This is the case of Amaz, for example, directed by chef Pedro Miguel Schiaffino, one of the most representative Amazonian chefs in the world, and the best known in Peru.

In Peruvian Amazonian cities, such as Iquitos or Tarapoto, for example, cuisine proposals have been developed that can be considered excellent within the range of local culinary possibilities.

The system of treatment of the yucca in the elaboration of masato, the most important indigenous Amazonian beverage, made with the yucca brava or bitter, involves an elaborate transformation process to eliminate the toxic elements contained in the yucca used.

Another unique procedure is the cooking of fish in reeds of guadua cane in whose hollow trunk small fish are introduced to roast them directly on the fire, in a system known as marona challua. Or some conservation systems that are applied in the middle of the rainforest.

Of these, the best known are, apart from the cecina, popular in many parts of the world, the michira, which are meats preserved in their own fat, which is then used for frying, a method that is not very common in the region, where food is cooked by roasting and parboiling.

The other method is kunishqa, which refers to the slow smoking of bush meat, which is then preserved in baskets made from natural fibers.

The uniqueness of the indigenous Amazonian cuisine is the preparation of food in the style of the pango or pangu, which consists of the preparation of a simple meal that uses almost no seasoning, except salt, and sometimes not mineral salt, but a substitute “vegetable” salt, to cook fish, fresh or fresh salted, in boiling water, and practically nothing else, accompanied by green plantain or cassava.

The essence of Amazonian cuisine is the use of fresh ingredients obtained from the jungle or the river, of which there is a wide variety that are not commercialized and are hardly known outside the fish landing sites and local markets of the Amazon.

For example, to give an idea of such variety, suffice it to say that in Iquitos there are several popular markets. One of them, very well stocked, is the fish market.

The varied and fresh Amazonian products, which are the essence of true Amazonian cuisine, are easily found in local markets, which is not easy to find in the markets of cities outside the Amazon, such as Lima, for example.

I consider an Amazonian cook to be one who uses Amazonian ingredients in his or her cooking.

The chefs of Amazonian restaurants themselves, such as those in Lima, have to figure out how to establish supply networks for such products.

The enormous distances and the isolation of the region, which has practically no overland communication routes, make the process difficult. Iquitos, the largest Amazonian city, can only be reached by river and air.

It is not easy to find a great cook in Lima who speaks as passionately about Amazonian products as Pedro Miguel Schiaffino (1976) does, and who understands the difficulties in obtaining them and helps to solve them. 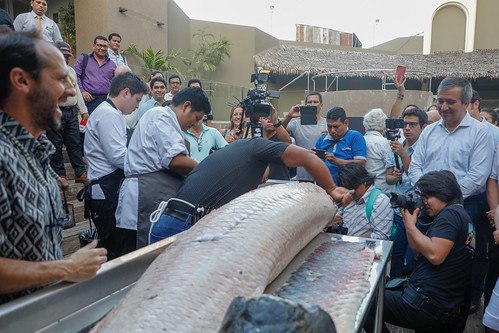 Schiaffino has two restaurants. One is Malabar, created in 2004 and ranked 39th of the 50 best restaurants in Latin America. But now his passion is channeled into ÁmaZ, opened in 2012, which is dedicated exclusively to Amazonian cuisine.

From there, Schiaffino has undertaken some projects to create marketing systems to bring Amazonian ingredients to Peruvian markets.

One of these projects is what he calls the “Amazon pantry”, which he is developing with indigenous fishing communities in Pacaya, who supply him with pirarucu (Arapaima gigas), known as paiche in Peru. Another is with the Bora and Huitoto Amazonian indigenous peoples for the commercialization of yucca brava, starch, flour and tucupi.

Amazonian cuisine is developed in the heart of the Amazon, especially in the cities with the largest populations. This is the case in Iquitos, where cook Pilar Agnini officiates.

Pilar has a restaurant, La Mishquina, condiment or seasoning in Quichua. Mishquina opened in 2007. A modest cooking and secretarial school is located in the same building. Elia García de Reátegui is the owner of the Patarashca hotel and restaurant in Tarapoto, San Martín, which she runs with her family.

The most commonly used source of protein in the Peruvian Amazon is fish and roasts and stews of bush animals.

The most representative of the three is the juane, which admits many variants, but is usually prepared with rice or ground yucca, along with chicken or fish meat, and wrapped in bijao leaves.

It is the most representative dish of Peruvian Amazonian cuisine: the typical dish of Holy Week, and of the day of San Juan, patron saint of the region.

The second is the sarapatera, a food prepared with the meat and in the shell of a river turtle called charapa (Podocnemois expansa).

The third is the patarashca, which consists of fish that is wrapped in bijao leaves to be grilled over the coals. It is more or less a juane, but made of fish, without rice, unlike this one, and seasoned with aromatic herbs.

It is a dish widely consumed in the San Martin region. In the Amazon, turmeric (Curcuma longa) is called guisador.