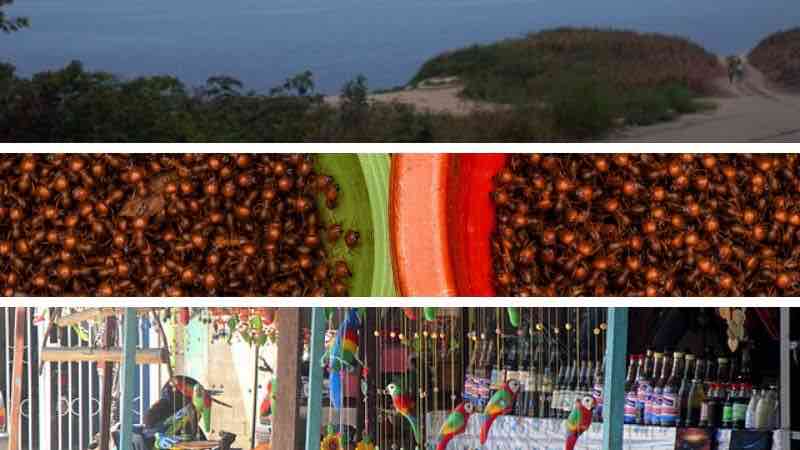 The Amazonian gastronomy of Venezuela is characterized by having two great variants; there is the properly native and the urban brought by those who live in the cities and trade their products to the jungle.

In this sense, it can be studied by analyzing these five aspects: geographical context, indigenous communities or tribes that make life in the indigenous market of Puerto Ayacucho, urban restaurants, native products and exponents of haute cuisine.

TheAmazon portion of Venezuela is relatively small compared to the other Amazon countries.

It covers only 177,617 km2, considering exclusively the area of Amazonas State. Using other criteria, such as administrative or hydrological ones, the region considered Amazon is extended to 453,000 km2.

Strictly speaking, the Amazonas-Orinoco basin comprises the state of Amazonas and part of the state of Bolívar.

The Amazonas state is the least populated in the country, presenting a population density of 1.7 inhabitants/km2.

This state has a population of 190,000 people, 73% of whom are concentrated in the city of Puerto Ayacucho, the capital, which is home to 137,907 inhabitants, making it the heart of the Venezuelan Amazon.

The city is located near the Orinoco River, which frequently floods some of its neighborhoods.

It is followed by other small cities such as San Fernando de Atabapo, with about 13,000 inhabitants, located at the confluence of the Orinoco, Guaviareand Atabapo rivers.

What factors affect the preservation of biodiversity in the Venezuelan Amazon?

The situation of the Amazon, despite the fact that it is a vast territory with relatively little intervention, is highly compromised by legal and illegal activities.

The legal ones derive from the concessions granted by the Venezuelan government of Nicolás Maduro for the extraction of gold and diamonds to foreign companies on biosphere reserve lands.

In February 2016, the government decreed the Orinoco Mineral National Energy Development Zone, which has affected the lives of native indigenous communities and stimulated deforestation in the region and the growing and intense pollution of the rivers that flow into the Orinoco or to the Caroní, which are connected, by the Casiquiare branch, with rivers that, in turn, are tributaries of the Amazon River.

Additionally, the threat of Colombian guerrilla groups that control part of the area and use it for drug and fuel trafficking is growing.

The presence of illegal miners, or garimpeiros, gold and diamond extractors, has been a constant threat of disturbance and incitement to violence for several decades in the area, which has affected the indigenous communities that inhabit the border between Venezuela and Brazil.

The indigenous communities of the Venezuelan Amazon

More than 20 indigenous peoples live in the region, including yanomami, piaroa, jiwi o jivi, yekuana, Wotija, Baré, although the most important in number are two ethnic groups that represent about 48% of the total number of indigenous people: the Yanomami, with 26%, and the Piaroa, with 22%.

The Orinoco River is one of the most important rivers in the world due to its length (2,140 km) and its flow rate (a little over 30,000 m3/s). This river forms a hydrological basin of about 1 million km2, which is of great importance for the life of the country.

The popular cuisine in the Amazon gastronomy of Venezuela

Two gastronomic variants are developed in the region: the rural-indigenous and the urban,

The indigenous corresponds to a culinary regime that is based on the consumption of meat from wild animals, bovine and fish, which constitutes, especially the latter, the main source for obtaining protein.

This regimen is complemented by the consumption of cassava, banana, and some industrially processed products that are marketed in the region, such as rice and noodles, which the indigenous communities obtain by going to the market in the city of Puerto Ayacucho, to sell or exchange their fishery products, meat, Wild animals edible insects and local crafts.

The most active place of commercial convergence in the entire state is the indigenous market, where they meet.

The other gastronomy, officiated by professional chefs, makes great efforts to survive, especially in the harsh conditions in which the economy and society have been debating in recent years.

Severe shortages and growing hyperinflation not only of food, but also of basic services, such as electricity and fuel for transporting people and goods to markets and production centers.

The indigenous market of Puerto Ayacucho

The indigenous market of Puerto Ayacucho, which takes place on Saturdays on Amazonas Street, and in the nearby fish market, is filled with people, indigenous and mestizos, and many products that sometimes come from far away.

The baskets full of big-ass bachacos or palm worm larvae that try to get out of the containers that contain them, or the whole smoked fish artistically tied with natural fibers, the various fruits, the bottles of honey, the pieces of chicken left out in the open , in the midst of intense sun and unbearable heat.

The Amazon restaurants of Puerto Ayacucho

In the city there are very few restaurants. The two best-known restaurants that serve Amazonian food are: La Pusana restaurant, located on Aeropuerto Avenue, Los Lirios sector, which has been operating for more than fifteen years, directed by Nena Silva, who enjoys great regional recognition.

The other is the El Rincón del Paraíso restaurant, established in 2015 by chef Nelson Méndez, in partnership with his sister Lídice and Pablo González.

Amazonian products, which are the basis of regional culinary preparations, are almost the same as in the lowlands of the Amazonian countries, although with other names.

The same happens with some animals of the forest: the picure or agouti (Dasyprocta variegata), the lapa (Agouti paca), the labiate-cheeked peccary (Tayassu pecari), the collared peccary (Tayassu tajacu), the chiguire or capibara (Hydrochaerus hydrochaeris ),the tapir or tapir (Tapirus terrestris), the deer (Mazama americana), etc.

In 2017 he was chosen Gold Fork by the Venezuelan Academy of Gastronomy.

He did his cooking internships in important Caracas restaurants run by demanding foreign chefs, who taught him avant-garde culinary techniques, which he applies to transform Amazonian products, incorporating cassava, Amazonian fruits and drupes, Amazonian peppers such as the murupí or screw.

He has been a representative of Venezuela in the annual event Madrid Fusión, in Spain. His book “Knowledge and flavors of the indigenous gastronomy of the Amazonas State” was an important milestone in his professional career, closely linked to Amazonian cuisine.

The Fundación Cocina Amazónica Venezolana together with chef Nelson Méndez have dedicated themselves to sharing and learning from remote communities the methods of cooking, conservation, cultivation, hunting and fishing.

In addition to learning the mythical meaning of each ingredient or natural product, it is later analyzed to obtain nutritional values and present culinary proposals of international category.

The Amazonian gastronomy of Brazil: its geographical context, important cooks or Chefs, ingredients and 10 typical dishes.