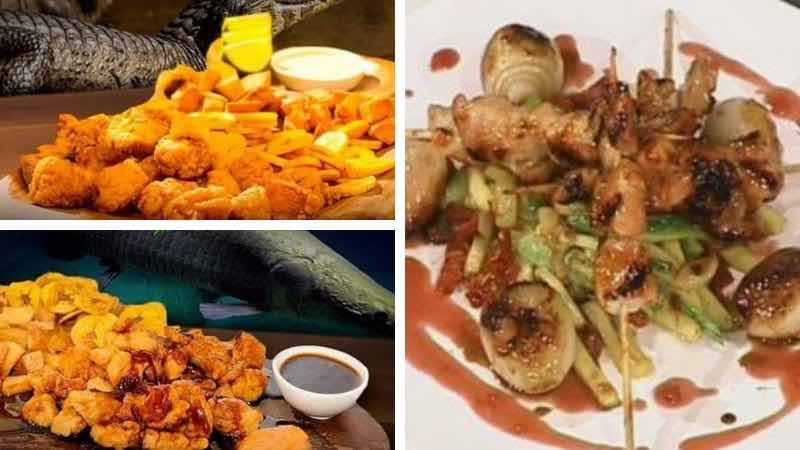 Bolivia’s Amazonian gastronomy differs somewhat from the rest of the countries, because it is influenced by the food of the Amazon. and the cultural brand of the basin, and the native indigenous peoples, who have inhabited the basin for millennia, and the “aggregated” indigenous peoples, such as the Aymara and Quechua, who have migrated to the Amazon, especially since the twentieth century, spreading their culinary uses and products in the region.

Bolivia is one of the most important Amazonian countries in terms of territorial coverage per Amazonian country, even though it corresponds to only 11.1% of the total surface area of the basin. Although people usually perceive the country as Andean.

The Amazonian portion covers, according to the geographical criteria used, between 43 and 65% of the country’s total territory.

The Bolivian territory is generally divided into two large, almost equal blocks: the highlands (the altiplano and the inter-cordillera valleys), and the lowlands (where the Amazon is located).

The geographical definition of the country is very imprecise, and depends on the source used, even by official sources, which include some departments as Amazonian, and in other cases not.

Which regions include the Bolivian Amazon?

There is a great wealth of biodiversity resources there, although according to specialists it does not possess the richness attributed to the mega-diverse South American countries, such as Peru, Ecuador, Colombia, Venezuela and Brazil.

Why is Bolivia included in the Amazon River Basin?

It belongs to the Amazon basin because its large rivers, such as the Madera, the largest in the region, and others such as the Mamoré, the Iténez and the Madre de Dios, are incorporated into large tributaries of the Amazon River .

It shares, then, with the other countries of the basin the water sources, the forest, the climate and the soils, as well as the same plant and animal foods.

Protagonists of the Amazonian gastronomy of Bolivia

In the Bolivian Amazon there are no large cities, which could stimulate the development of Amazonian markets and restaurants of a certain importance, unless they are small popular restaurants that offer meals with ingredients from the jungle and rivers.

But not always, because some regional reports indicate that freshwater fish is not highly valued in Bolivia, except for some species such as pirarucú or paiche, surubí and catfish.

The most consumed meat is that of the lizard(Caiman yacare ), called matasha aidha, which can be eaten roasted, fried, baked, and even raw in ceviche.

The lizard is marketed by an indigenous Tacana cooperative, made up of some 40 families living in the Amazonian area in the north of the department of La Paz.

This association has been working since 2007, with the support of the WCS (Wild Conservancy Society) and the Bolivian government in a conservation program for the lizard, which has been decimated by illegal hunting.

Haute cuisine in the Amazonian gastronomy of Bolivia

Restaurants self-qualified as Amazonian are few, relatively recent and are located in large cities, such as Cochabamba, is the case, for example, to mention El Tábano, created in 2017, owned by the agronomist engineer René Ibáñez.

But there are cooks who are conscious of promoting the abundance of products of the regional flora and fauna, applying, as is also usual in other Amazonian countries, modern techniques for the use of Amazonian products.

Such as we find in Bolivian Amazonian haute cuisine dishes: asaí fettuccini, pickled lizard with watermelon rind, or grilled paiche with romesco sauce.

Or venadoli, urina or deer meat, mixed with black quinoa, spinach and Amazonian walnuts that cover a puff pastry dough.

Chefs of stature exponents of the Bolivian Amazon Gastronomy

There are chefs of the stature of Kamilla Seidler, Gabriela Prudencio, Pamela Flores, Kenso Hirose, Pedro Guereca or Sergio Chávez who offer Amazonian culinary preparations conscious of the need to preserve the Amazon and its sustainability, while respecting the rights and well-being of the Amazonian indigenous peoples.

In the city of La Paz, a great event is held: The Amazon Gastronomic Forum, which has several editions.

This event is organized by the School of Hotel Management and Tourism (EHT) of La Paz, and has been attended by outstanding chefs such as Pedro Miguel Schiaffino (Peru), Eduardo Martínez (Colombia), Juan José Aniceto (Ecuador), Rafael Da Silva (Brazil), Carlos García (Venezuela) and others.

Popular cuisine in the Amazonian gastronomy of Bolivia

A bit different is the popular Amazonian cuisine that offers insects such as tuyu tuyu (which is the suri or chontacuro, the larvae of the beetle Rhynchophorus palmarum ) skewered and fried, accompanied by Amazonian honey.

Or the fried tujo or cepe culón culón (the bachaco or culona ant of the genus Atta, abundant in Colombia and Venezuela).

Projects to support the development of Amazonian gastronomy in Bolivia

The Amazon was, for Bolivia, the backroom of the country, and it was not until after the indigenous march for territory and dignity in the mid-1990s that the whole country began to take its Amazon into account.

Since then, entrepreneurship projects have been carried out in Bolivia, such as Madre Tierra Amazónica, promoted by the Association of Agroforestry Producers and Entrepreneurs, which seeks to commercialize in the Bolivian market some products from the Amazon rainforest, such as copoazú, asaí, majo, tamarind, carambola and acerola pulp.

Beautiful books on the Amazonian theme are published in Bolivia, such as “Green Gastronomy”, promoted by the Gustu restaurant (founded in La Paz by the Danish businessman Claus Meyer, with the advice of the great chef René Redzepi), the Wild Conservancy Society and the Bolivian Ministry of Environment and Water, with the collaboration of the Civil Support Fund of the Danish International Development Agency (DANADI).