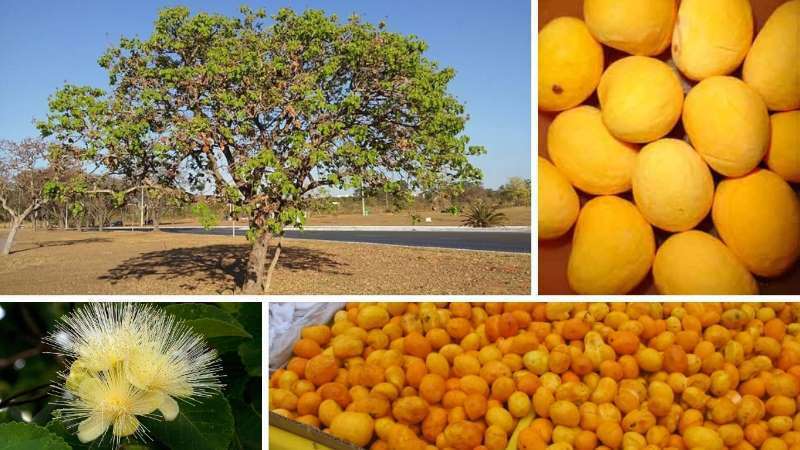 The pequi or souari nut (also called piqui, piquiá, cashew, piquá-rana, barbasco , spiny chestnut, jigua, among others) belongs to the Caryocaraceae family. 16 species of the genus Caryocar L. have been reported, the most economically important being: Caryocar brasiliense; C. villosum and C. coriaceum (Maciel Guedes and Ferreira de Faría Machado, 2017).

Origin of the pequi

It is a fruit native to Brazil and can be found from the Amazon to São Paulo, including Pará, Maranhão, Piauí, Goiás, Mato Grosso, Mato Grosso do Sul, Bahía, Ceará, Minas Gerais, Río de Janeiro and Tocantins (Almeida and Silva, 1994; cited by Barros de Oliveira, Barbosa Guerra, Moura Barros de, and Elesbão Alves, 2008).

Therefore, it is considered a symbol of the Brazilian Cerrado, which is the richest savannah in the world in number of species and the second most important biome in Brazil, after the Amazon (Maciel Guedes and Ferreira de Faría Machado, 2017).

The pequi can also be found in some South American countries, including Paraguay, Bolivia and Argentina.

Description of the fruit

The mesocarp or pulp is yellow and has an oily texture; It has a characteristic aroma and flavor; below this there is a row of small spines, so care must be taken when cutting it (Shanley, Cymeris, Serra, and Medina, 2012).

The pulp (100 grams) is the main food source: it contains 81% water, 2.7% protein, 8% oils and fats, 1% ash, 6.7% carbohydrates, 120 mg carotene, as well as other vitamins, including thiamin, riboflavin, niacin, and vitamin C (Food and Agriculture Organization of the United Nations, 1987). Thus, the pequi has a high content of carotene and Omega 3 fatty acids.

This fruit has an important presence in the diet of the population in the areas where it grows, mainly to flavor rice dishes and stews. It is cooked in salted water before being consumed and its pulp is used in the preparation of some dishes such as arroz con pequi and frango com pequi.

It is also rich in oils (through pressing, 50% of the oil is extracted from the seed) that are used especially for frying. The seed is also an input in the production of liqueurs, given its aromatic properties.

On the other hand, pequi flowers are an important source of food for animals that live in forested areas.

A couple of recipes with pequi!

It is a traditional preparation from Goiás and Minas de Gerais (Brazil). If desired as a main dish add chicken.

Put the oil in a large frying pan, add garlic, onion, tomato and peppers; then add the salt and pequi. Gradually add water and, when the fruit pulp is softening, add the previously washed and drained rice and cook for about five minutes. Add the water and cook to the point (do not let the rice dry too much). Plate and add parsley and chopped chives.

Heat the oil in a saucepan, put onion, garlic and chicken to cook until golden brown; then add parsley. Pour in the water and cook until the chicken broth is thick. Season and when the chicken is ready, add parsley and chopped chives.

The seed oil and pulp of pequi ( Caryocar brasiliense) have antioxidant properties that protect against cancer, additionally it favors the control of cholesterol and triglycerides and thus the delay of atherogenesis (formation of atheromatous plaques in the arteries).

On the other hand, pequi oil ( C. coriaceum) has proven anti-inflammatory effects; in turn, it acts positively in the healing of wounds and gastric problems (mainly it is a hepatoprotector) (Maciel Guedes and Ferreira de Faría Machado, 2017).

Likewise, these oils favorably affect cases of asthma and diseases of the bronchi in general; On the other hand, the leaves of this tree in infusion are also used for these purposes. Even aphrodisiac properties are attributed to it (Jardim, Killeen and Fuentes Claros, 2003).

Both the oil from the seeds and from the pulp of pequi is used in the production of handmade soaps and also has great potential in the cosmetic industry. Likewise, biodiesel can be made from the oil extracted from this fruit.

On the other hand, the wood, of high quality and resistance, is used in the elaboration of large pieces in civil and naval construction; It is also used in posts, fences, furniture, art items, among others (Shanley, Cymeris, Serra, and Medina, 2012).