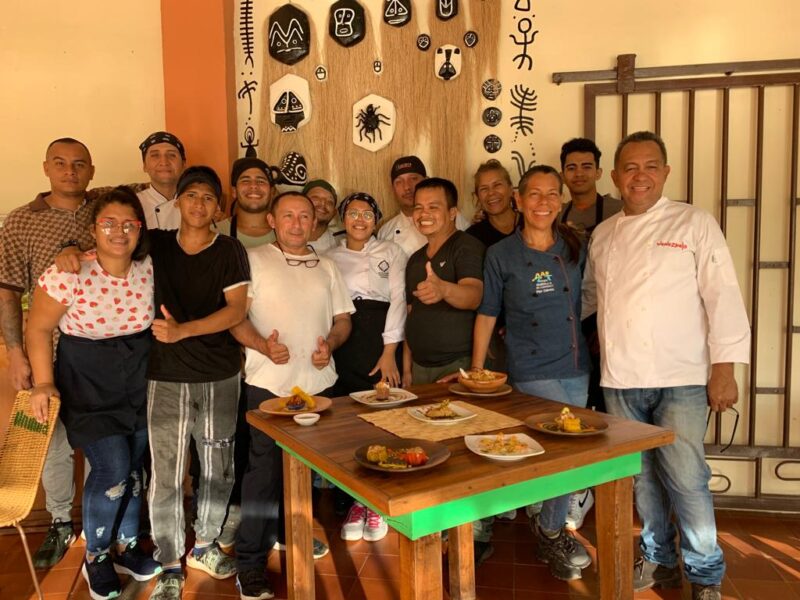 Nelson Méndez is a Venezuelan cook, born in Puerto Ayacucho, capital of the Venezuelan state of Amazonas, one of the parts that make up the Amazon region of Venezuela, connected to the Venezuelan Orinoquia. If we add the territories of the states of Amazonas, Bolivar, Delta Amacuro and a small part of the state of Apure, we would have a little more than 491,300 km2, almost 54% of the country. However, its vast extension represents only 6.64% of the overall total of the large extended Amazon basin, linked to the Venezuelan Orinoco. Both form, in practice, a large basin. The Orinoco River connects with the Amazon through the Casiquiare branch, which flows into the Negro River, one of the main tributaries of the Amazon River. Nelson comes from that world, which is so vast and intimidating when you experience it.

Only three countries (Brazil, Peru and Bolivia), out of the eight that make up the Amazon, are responsible for 92% of the basin’s total surface area. In other words, they are the large Amazonian countries. However, despite coming from a country with a small territorial participation, and a marginal presence in the economy and national politics, Nelson is one of the most outstanding Amazonian cooks in South America. It was one of the first to be presented at Madrid Fusión, the most important gastronomic stage in the Spanish language. Nelson was there in 2012, some four years after Peruvian chef Pedro Miguel Schiaffino. With great dedication, the Amazonian cooks, together with the great Brazilian chef Alex Atala, the most renowned of them all, have managed to bring Amazonian cuisine out of anonymity.

It is not easy to be an Amazonian cook

Nelson is nicknamed the Shaman. Do you know what a shaman is? A shaman is the intermediary between two worlds that seem irreconcilable: the secret world of the spirits and the world of everyday things, which govern the order on earth. The shaman is an enlightened seer, who uses some hallucinogenic concoctions, such as ayahuasca, to fly between heaven and earth and reconcile with the jaguar, a dual presence, representing glory and death. And while I am not sure if Nelson is really a shamanic figure, mediating between the gods, spirits, demons and hidden forces in nature, I do know that Nelson moves nimbly between the unique foods of the jungle and the world of smells and tastes of urban tables. And I also know that it has not been easy for him to understand the true meaning of his life as a cook who feels committed to transmitting to us the strange flavors of the unusual ingredients of his land, which many reject or have reservations about because they do not resemble the foods they are accustomed to.

I understand, in a way, what is happening to Nelson. It is not easy to teach diners a new sensory grammar, nor is it easy to learn to evaluate what people find repulsive at first glance. Thank God my dear Nelson takes it, with his good humor, diplomatically. And he laughs. I even believe that he learned to terrorize us from the kitchen, perversely enjoying our disgust and our own fears.

We should be indulgent with Nelson and his efforts, and his efforts to teach us how to behave civilly at the table of the future. Because that’s what we will be: insect eaters, which is the cleanest protein source we can imagine, and the one that offers us the most efficient biomass conversion rate among all other protein sources.

When Nelson, practicing his mysterious shaman’s alchemy, transforms the fearsome and unpleasant monkey spider into a jungle locust, served casually on an elegant civic table, he is offering us a lesson in ecology and good consumer practices that only a few can now decipher with clarity. When Nelson brings to our palate a wide range of fruits that we had never seen before, because they were confined to an impenetrable, mysterious and distant jungle, he is giving us, without saying it, a lesson in social geography. And bringing us closer to a natural and cultural landscape that we will surely never know.

That’s it, Nelson, for me. A singular cook who acts as a mediator of ancestral knowledge and an indigenous cosmovision that we will never understand, no matter how learned we think we are, if we do not refine our sensibility and learn to look at things with the eyes of the spirit, and discover the essence behind the appearance.

I could tell you about a child of the Baré ethnic group who, without realizing it, discovered himself accompanying his old grandmother in her cooking duties, when she cooked for the missionaries who went into the jungle. Or that teenage boy who studied something that the curriculum called hotel management in Ciudad Bolivar, almost seven hundred kilometers away from his homeland. Or that shy, dazzled provincial upon his arrival in Caracas at the end of the 1980s. And even more so, that Nelson, a beginner in the spacious kitchens of the luxurious Tamanaco Hotel, an icon of avant-garde hotel architecture in the overbearing Caracas of the time. What would chef Frank Miller, from the Tamanaco, or chef Wolfgang Encke, from the Caracas Hilton, think of that Nelson Méndez who arrived at their kitchens with a smile on his face and a great desire to learn. And he learned very well the lesson of French cooking techniques. And then, with full mastery of the arts of fire, he became head chef at the Ritz Hotel, and later at the French bistro Biarritz.

In those years, he was not yet our shaman. Until one day, perhaps around 1988, he decided to continue the work of that Amazonian cook he had taken so long to become.

Since then, Nelson has become the shaman of our Amazonian cuisine.

In 2010 his book, Saberes y sabores de la gastronomía indígena del Estado Amazonas, was published by Editorial Oscar Milano. In January 2012 we found him at Madrid Fusion, representing Venezuela. In 2013 he was a media chef at the third edition of the International Gourmet Festival. In March 2016, he created the Culinary Institute of Amazonian Research. In October 2017, the Venezuelan Academy of Gastronomy (AVG) awarded him with the Golden Fork as the best chef of the year. In 2018 we found him in Belém do Pará, Brazil, with my wise friend Charles Brewer Carías, talking about medicinal plants. And he does not rest, present in many other Latin American cooking scenarios, in Peru, Brazil, Colombia, talking about Amazonian cuisine, in the manner of the ineffable shaman Nelson Mendez.