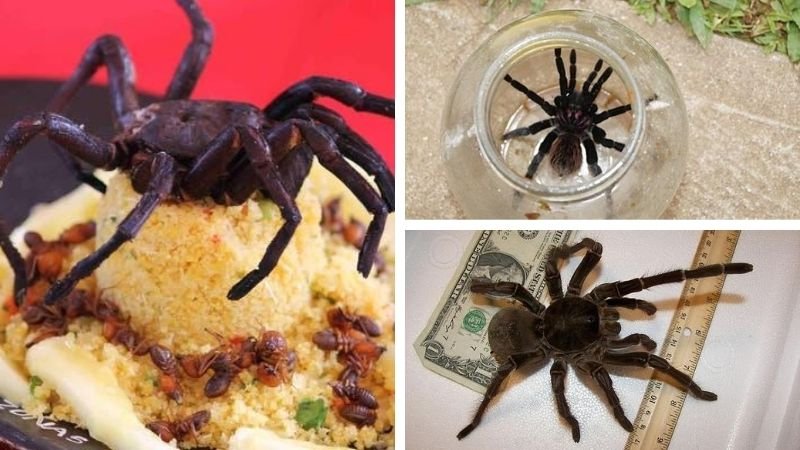 Migalomorphs are characterized by parallel chelicerae, which do not cross when moving.

They also have only two pairs of “spinnerets”, glandular appendages with which they produce silk.

Migalomorphs also have eight eyes, although they have poor eyesight.

Theraphosa blondi is a huge spider that prefers humid, warm and rainy environments. It presents shades of brown, and may exhibit dark stripes on the legs.

It has a terrifying hairy body and is considered the largest in the world. Its body is robust, with a long, broad thorax and thick, strong legs.

It reaches a length of 28 to 30 cm, with its legs extended, and weighs about 100 g, although there are exceptional records of 150 g.

✅ Where does the monkey spider live?

It is distributed in the Amazonian regions of Bolivia, Brazil, Colombia, Guyana, Venezuela, and probably in Ecuador and Peru.

It is known as the Goliath tarantula, although the name tarantula is improper, since it is a generalization of a spider, Lycosa tarantula. found in the city of Taranto, in southern Italy.

The bite was believed to produce tarantism, a nervous disease, which was cured with a quick purifying dance, the tarantella, although it was proven that the effects of the poison were not such.

The females of this spider are larger than the males. They reach sexual maturity at three years of age. Before mating, there is a sexual courtship.

Males are attracted to a substance secreted by the female. The monkey spider is said to live up to 14 years, reaching a longevity of 25 years in captivity.

Other species live only one year. For this reason, it is used as an exotic pet, sold legally and illegally, fetching high prices in the U.S., European and Asian markets, compromising the sustainability of the species in the extraction sites (Ferretti et al 2011).

Monkey spiders are nocturnal, and it is difficult to see them during the day. It lives in burrows, especially the female.

Males hunt near the den. They feed on invertebrates, particularly centipedes, cockroaches, earthworms, beetles and crickets.

The species Theraphosa blondi has solitary habits. And they only come together during the mating season.

The female fertilized by the male lays 50 to 200 eggs, which hatch inside her burrow after six weeks.

The venom secreted by the spider, even the most potent, is not fatal, but it is painful and lasts about 48 hours, leaving the after-effects of a wound.

The monkey spider defends itself against predators by using both its venom and by propelling its stinging hairs with its hind legs, which injure the eyes and mouth of those affected.

The meat of this spider is consumed by Amazonian Indians. As it hides inside its burrow, the native forces it to come out by inserting a branch into the hole.

They then place them directly on the fire to burn their stinging hairs and roast their bodies, consuming only the cephalothorax and legs.

In the Venezuelan Amazon, the jungle natives are great eaters of insects and spiders, which they collect in the jungle.

The meat tastes like shrimp. Professional cooks located in the cities of the Venezuelan Amazon, mainly Puerto Ayacucho, prepare and serve araña mona.

Members of the indigenous communities of the Yanomami ethnic group, located on the Amazonian border between Venezuela and Brazil, in the Manaca region, in the Motorema, Warapana and Hatakoa communities, consume insects and spiders, including the monkey spider, which they roast and season.

The Yanomami Indians consume about 80 groups of invertebrates, including coleopteran larvae and some termite species. Another group, the Yekuana, consume some 23 invertebrate groups, but not the monkey spider.

In addition to the monkey spider, the Yanomami consume two other spider species known as Hobtele waikashiemi and Heteropoda venatoria (Araujo, Beserra 2007).