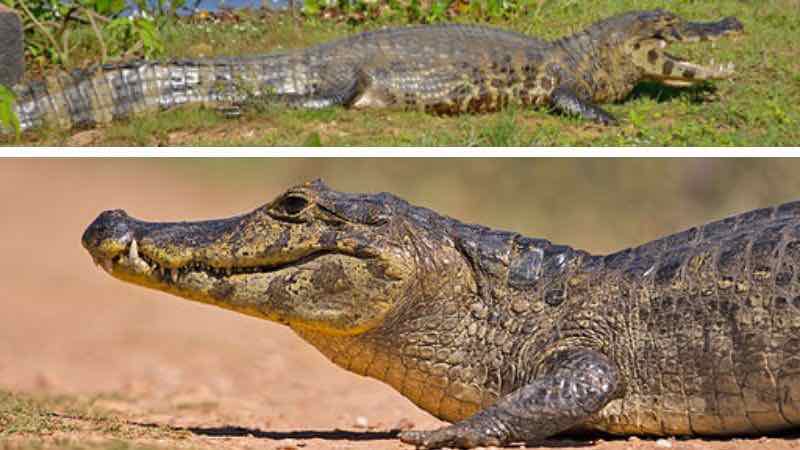 The crocodile or caiman yacare (Caiman yacare) and the crocodile or black caiman (Melanosuchus niger) are two sympatric species, i.e., they are two species that inhabit or overlap in the same habitat, the populations are not geographically isolated, and their ranges overlap partially or completely, which constitutes a form of speciation.

This is the case in some heavily depredated parts of the Bolivian Amazon. In these cases there is a larger population of C. yacare than of M. niger due to the historical modes of exploitation and the competition processes that may exist between the two species.

On the other hand, it has been proved that the species M. niger recovers more slowly than M. niger. C. yacaré, at least this is what was observed in lagoons far from the main channel of the Bolivian Ichilo River, located near Puerto Villarroel, the main fishing landing port in Bolivia (Aguilera, Coronel, Oberdorff, Van Damne 2008).

Before the 1950s the two species were widely distributed in the water bodies of Bolivia, Colombia, Peru, Ecuador and Venezuela.

But from that period on, the price of caiman skin increased notably, especially in the European and American markets, and the exploitation of the resource increased, to the point of overexploitation of both species (Ojasti 1996), bringing them almost to the brink of extinction.

A sustainable development program with the caiman

In the Bolivian Amazon there are five species of alligator tortoises. With one of them, C. yacare, a sustainable development program has been developed for the. This is a national program for the exploitation of lizards in hatcheries, which has established a maximum annual exploitation quota of 50,000 specimens of the species, although, in practice, the average number exploited does not exceed 30,000 per year.

These are reptile management plans, established in agreement with the indigenous ethnic groups, which include legal hunting, transport and commercialization, seeking to benefit the indigenous communities economically, while teaching them to conserve the resource in the long term.

A number of specimens was hunted according to a count carried out among local supervisors and indigenous representatives. Of the total detected, 25% is hunted (or “harvested” as they call it), and the remaining 75% is left for conservation. The specimens are usually harvested from a size of 1.80 m, which is reached between 3 and 8 years of life. It is estimated that an alligator can live up to 12 years, and from 35 to 45 years in captivity.

Ninon Ríos is a young Bolivian biologist and master’s degree holder who has been involved in several research programs and conservation plans for caimans in the Bolivian Amazon.

She has been passionate about the subject for several years. Interviewed by Mongabay Latam (05.08. 2019), Ríos explains her interest in these reptiles because “they are very ancient, and throughout their evolutionary history they have remained very similar to their ancestors.”

He reveals that the caiman is not an aggressive animal, because it does not come to attack people, even when they are hungry. He says that “many of the ideas we have about them are wrong, because, to begin with, they are animals that don’t eat much. There are reports of accidents because people are careless.”

Caiman meat is marketed because it is difficult to distinguish from chicken meat in Amazonian markets and is promoted by exponents of Bolivian Amazonian gastronomy. Ríos points out that the indigenous Bolivians believe that the large lagoons are cared for by large caimans or sukirismoy .

When these caimans are hunted, the lagoon dies. The biologist says they may be right. The caiman is one of the largest predators in the region, and they are at the top of the food chain. Because of their elevated position, they occupy a central place as regulators of the health of the populations in this ecosystem. If it is killed, the lagoon may experience serious environmental problems.

Other Amazonian crocodiles or caimans