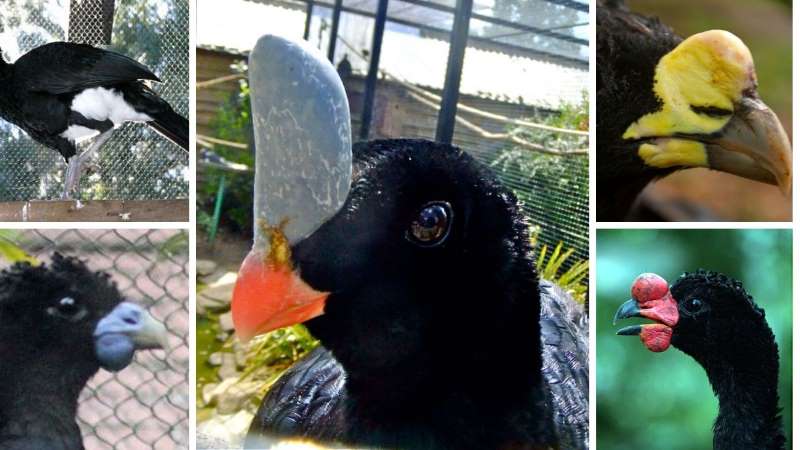 Curassow(Crax salvini, C. unicornis, C. Alberti, C. Globulosa, C. Rubra) is the common name for some birds of the family Cracidae, found in tropical rainforests and the Amazon rainforest.

The following are 5 species of birds are better known as curassows .

3 species of curassows of the Amazon

The species C. salvini (or Mitu Salvini) also known as the white-bellied curassow, is about 90 cm long, has a shiny bluish-black plumage, with white sides, belly and tail tip.

It has been recorded in eastern Ecuador.

It is easy to distinguish the horned curassow(Crax unicornis or Pauxi Unicornis) whose adults have a very striking obliquely erect ellipsoidal frontal helmet.

This species has its habitat restricted to the high jungle, generally in Bolivia and Peru.

Both species are hunted for their meat, which is edible and highly prized.

They are seriously threatened by habitat destruction and illegal hunting.

The species with the scientific name Crax globulosa, better known by its common names of Moquirrojo or Amazonian curassow, inhabits the lowland rainforests of almost all the countries of the Amazon basin.

2 paujiles or pavones from Colombia and Central America

Another species of blue-billed curassow (Crax Alberti) is also commonly called paujil, but this one is not Amazonian. It inhabits from the Sierra Nevada of Colombia to the lowlands of the Magdalena River.

Its populations have been depleted in a worrying way and it is currently catalogued as endangered.

In addition, the yellow-billed curassow has a wide geographic distribution. It can be found from Mexico to Colombia.