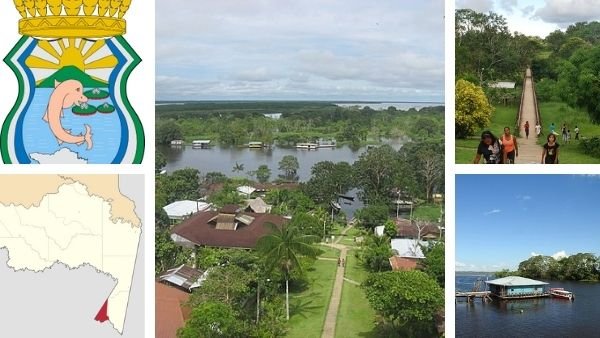 Puerto Nariño is the second municipality of the Department of Amazonas, Colombia, due to its importance and territorial extension (6,816 inhabitants and 1,876 km2, of which only 2 km2 correspond to the urban extension); It is located on the banks of the Loretoyacu River.

It was founded as a corregimiento in 1961 by Dr. José Humberto Espejo, being called Puerto Espejo; Later, given its geographical location in the border area and its demographic and economic growth, it was named Puerto Nariño in 1984, under Decree 106.

“The Shield will be shaped like a jar: in the upper part a crown with 9 points means the diversity of the Ethnic Groups. Inside the shield and on the sides the flag of the Municipality in green, white and blue colors. In the background, the rising sun that symbolizes progress and future in descending order, the green jungle with small characteristic undulations of its soils, but under it a Pink Dolphin, a species typical of the Amazon and represents the mythology and wisdom of its people. In the tail of the map of the Department in white that shows the prevailing peace, The blue background, hydrographic wealth and the Victoria Regia, a plant species. In the lower part of the shield the name of the Municipality “MUNICIPIO DE PUERTO NARIÑO”

Decree No. 092 of December 1996 of the Municipal Mayor’s Office of Puerto Nariño

How to get to Puerto Nariño?

Puerto Nariño can be reached from Bogotá by air to Leticia, or from Manaus (Brazil) to the Brazilian town of Tabatinga, neighboring the capital of the Colombian Amazon department.

From there it is accessed by riverthrough the Amazon River, being the only means of transport between both municipalities.

The route covers a distance of80 km that separates these two towns.

What to do? tourist activities

It is a municipality with an ecotourism vocation, known as the “Colombian manger” due to the uniqueness of its narrow streets.

It prides itself on being the first Colombian tourist destination to have achieved sustainable certification, characterized by the lack of motorized transportation, except for urban sanitation and ambulances.

Its landscapes, its floraand fauna, and its traditions are a pleasant experience, as well as walks through the urban area (Miviajar.com, 2020).

In the jungle there are trails that connect the urban center of the city with the indigenous communities, being ideal for hiking, trekkingor trekking (Alcaldía de Puerto Nariño, 2020).

The municipality has black water lakes, highlighting Lake Tarapoto, habitat of the pink dolphin, a unique species in the world.

In the low water season, this tour lasts three to four hours and tourists have the opportunity to swim, fish or practice kayaking, observing birdsand other species in unison.

Throughout the region you can see a diversity of fish, including the carnivorous piranhas; You can also visit the Natütama museum or the Wochine Reserve to appreciate the underwater world of the Amazon River and its plants (viajandox.com, 2020).

Likewise, it is a propitious occasion to taste the culinary preparations and traditional drinksof Ticuna indigenous peoples, Cocamas and Yaguas, like Amazonian chaufa rice; mojojoy, ceviche or pork rinds pirarucú and other grilled fish accompanied with yuca, tacacho of green banana or casabe; purple yam chicha, tree bread and chontaduro and other beverages frutas amazónicos like the copoazú, the arazá and the camu camu, among many other options (Fundación Leo Espinosa, FUNLEO, s.f.).

Institutional Video of the municipality of Puerto Nariño – Amazonas