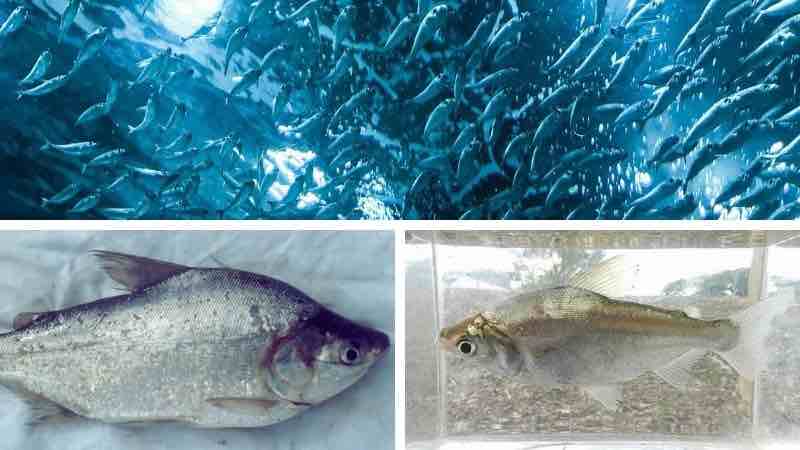 The llambina (Potamorhina altamazonica), despite its scientific name, is an abundant species in the Amazonian rivers of the lowland forest, with a slower current, widely distributed in the rivers of the Amazon basin, related to both the Amazon River and the Orinoco river.

The llambina belongs to the Curimatidae family, which abounds in the Amazon and Orinoco river basins, and extends towards the northeast of Brazil.

The species is between 15 and 18 cm long, of which its head represents a quarter. Its body is elongated and compressed, about 30 cm long.

It has a transversely rounded prepelvic region, without a keel, although it does present one in the posterior region. Its scales are small. Its coloration is dark gray on the back, and lighter on the belly.

Its diet is detrivorous, since it feeds mainly on organic matter and abundant microorganisms at the bottom of lakes and river banks.

Migrates in some seasons in search of food and conditions for reproduction.

The species performs seasonal migrations, associated with its feeding and reproduction.

Spawning occurs in the transition period of the flood, particularly in the middle of the rivers, with the highest spawning peak between January and February.

The average length at first sexual maturity is 18.9 cm in males and 17.8 n in females.

This circumstance shows a usual behavior in Amazonian fish, which represents a life strategy determined by seasonal change, whose life cycle is closely related to hydrological changes in rivers, and their availability in food.

It is an abundant species in Amazonian rivers, with a relatively low price in regional markets.

As large species decrease, smaller species abound in their place, generally belonging to the order of the Characiformes.

It presents a good performance in fillet with skin, close to 49% of the body weight, which totals between 150 and 200 grams.

From a nutritional point of view, it shows a caloric value of 153-190 kcal per 100 grams, and a great variation in its fat content, between 2 and 14%, according to the hydrological season.

With saturated fatty acids (such as palmitic and stearic acids), monounsaturated (oleic and palmitoleic) and polyunsaturated (linoleic, -linoleic).

In this species, the levels of heavy metal content are below the permitted limits.