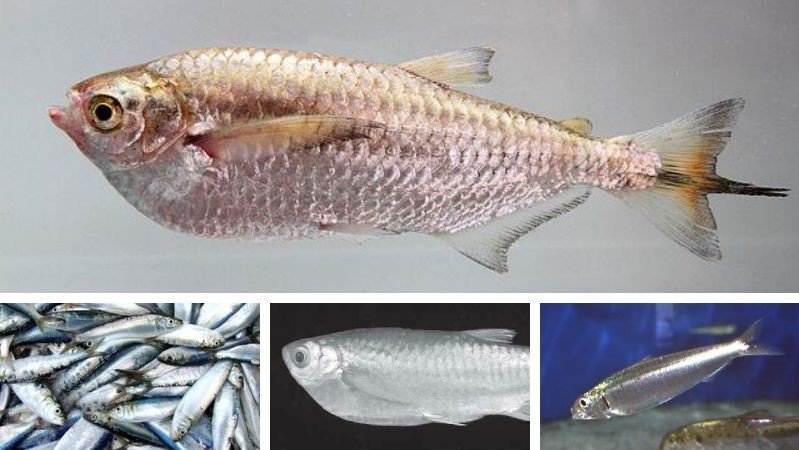 The name of sardine is applied to many fish species of saltwater and freshwater. Some species belong to the Clupeidae family, such as Alosa sapidissima, of medium size, from marine waters, which can weigh about 3 kg, or Sardinella aurita, a small species that only weighs about 130 g.

The name sardine is also applied to some species of the genus Lycengraulis, such as Lycengraulis grossidens, a freshwater species, which is also known by the name of river anchovy, which lives in the waters of the Orinoco and Amazon rivers, of the Engráulida family, which reaches about 23.5 cm.

Or some species of the Clipeiformes order, which inhabit both marine and fresh water, and comprise more than 24 species grouped into three genera: llisha, Pellona and Pristigasteridae.

Where to fish for sardines in the Amazon

However, the best known and most abundant species with the name of sardine in the riversof the Amazon basin of the lowland forest are Triportheus albus and Triportheus angulatus.

This remarkable phenotypic plasticity, which modulates different responses according to the environment, is a unique characteristic among Cichlids, Cichlidae, a family of fish of the Cichliformes order, mostly freshwater species highly sought after by aquarium enthusiasts due to the showiness of their fish. colors, the shape of their body and their habit of living at the bottom of aquariums.

The second, Triportheus angulatus, family Characidae, of the Characiformes, is usually found in times of flooding, in the flood lagoonsin the low Peruvian Amazon forest (Marín-Erausquin, Neumann 2006).

The species T.. angulatus It lives during the dry season of the Amazonian rivers in the main channels, and then when the water fluctuations so frequent in the Amazonian rivers occur, they enter, with the floodwaters, in the wooded areas looking for food and protection.

What influence do floods have on sardine fishing?

During these times, these fish incorporate into their diet fruits, seeds, leaves, and arthropods that fall from the trees into bodies of water during floods.

The remains of plant materials in the flooded areas constitute a very important fraction of the diet of T. angulatus, especially the fruits and inflorescences of the Bactris gasipaes palm.

The species, widely distributed throughout the Amazon basin, has a short, tall, thin, fusiform and compressed body, with a large head.

Its scales are large and transverse between the beginning of the dorsal fin and the lateral line, adding between 33 and 38 scales. Its color is silver or dark gray on the back and lighter on the belly (Spix, Agassiz S.f.).

The caudal fin has straight rays in the presence of a dark and elongated filament in the center. Its spines are long and abundant. It reaches a size of 15 to 25 cm and weighs about 250 g.

Their diet basically consists of fruits, seeds or insects. But it behaves like an opportunistic omnivore. It also feeds on fish scales, phyto and zooplankton, crustaceans.

It is a migratory species. It spawns in the time of rising rivers. Provides parental care for their young.

The fat content is low, and fluctuates according to the season and the predominant type of diet. Among the saturated fatty acids are palmitic and stearic.

Among the monounsaturated palmitoleic and eicosaenoic, and polyunsaturated linoleic and linolenic. Protein values range between 14 and 19%. Its content in phosphorus, potassium and calcium is important.

It is a very common species in fish landings in the Amazon, hence it is very important in commercial fishing.

It is among the top five species that support the Amazon fishery. Highly appreciated in the kitchen.

Their fillets with skin have a yield of 47 to 49% of the total body.

It is a very popular species in the feeding of the members of the native indigenous communities, who prepare it as a soup, and to be cooked on the coals, wrapped whole in leaves.