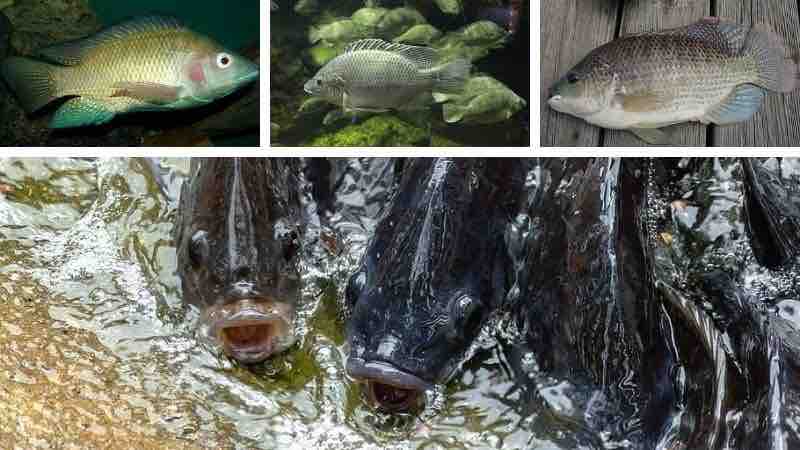 Tilapia is a generic name applied to a group of fish species of the genus Oreochromis, native to the African continent.

Tilapia was introduced in the countries of the Amazon basin since the 1960s, the first species being Oreochromis mossambicus introduced in Colombia and Ecuador in 1965 (Jácome J. Quezada A. 2019).

Tilapia and its commercial importance

Among them, the most important species are. Oreochromis aureus, O. niloticus, O. mosssambicus.

This genus is the second most important group of aquaculture species in the world, after the common carp(Cyprinus carpio), a species that has been introduced throughout the world, except Antarctica.

The species of the genus Oreochromis are fish that live in warm, fresh, salty and brackish waters. And even in poorly oxygenated waters.

They were introduced to other continents, from Africa, to become one of the most widely used genera in fish farms around the world, a system that provides most of the tilapia production.

These advantages are also their disadvantage, as environmentalists consider them to be predatory species, with a great invasive capacity that endangers most native fish.

Their production in aquaculture is criticized because, in many cases, to increase the profitability of the business, abundant antibiotics are used to control their diseases, which increase in overcrowded environments, and hormones, such as methyltestorena to accelerate their growth and, in some uncontrolled cases, all kinds of wastes are used in their feed.

Apart from the fact that some studies have shown that it contains less omega-3 than most wild-caught fish.

Fish scales contain collagen, particularly those of tilapia. Collagen used in the cosmetics industry (gloss for lipstick and nail polish, and also used in creams and lotions) has traditionally come from animal waste.

But now, more and more, fish scales are being used for this purpose. And particularly those of tilapia, which contain a lower percentage of fat.

Collagen from fish scales is used for corneal production in eye transplants. And tilapia offers a good alternative.

Its easy adaptability to concentrate feeding has been a very important factor in its choice as a species for captive breeding, because concentrate feed represents about 60% of the production costs in this activity.

Of the group of species that make up the genus Oreochromis, the best known and most commercially exploited are three: O. niloticus, O. aureus and O. mossambicus.

O. niloticus is the most widely used tilapia species in freshwater aquaculture, and the most studied by researchers because of its commercial importance.

It is known as silver tilapia or Nile tilapia. It can measure up to 60 cm and weigh up to 2 kg.

Its body is compressed, presenting vertical lines separated from each other, dark in color. During the breeding season, the fins turn reddish.

It is a species that is not very tolerant to cold waters, preferring warm waters. It feeds on benthic algae, phytoplankton, zooplankton, eggs of other fish species and larvae.

O. aureus is known as blue tilapia. Its body is compressed, with a maximum length of 35 cm, and weighing a little more than 3 kg.

It has an interrupted lateral line on its body and large dorsal fins.

The color of its body is metallic blue-green, with greater intensity on the head. Its belly is light colored. Its dorsal fins and the end of the caudal fin are red.

It is a fast-growing species and reaches sexual maturity earlier than the other two species mentioned, around four to six months of age.

At three months of age, it weighs 60 to 100 g. Planting density ranges from 4 to 7 adults per m2. Some specialists consider it a hybrid resulting from four species of tilapia.

Its production takes place between 22 and 29 °C. The species has very defined territorial habits, and defends its territory aggressively.

It has a very broad diet. It is a species with marked sexual dimorphism: males are larger than females, measuring up to 39 cm. It is very tolerant to high pond water temperatures.

Tilapia is a fish that usually moves in schools. It is often very territorial, although sometimes this condition does not manifest itself in densely populated ponds, where they are divided into sexes (sex-segregated ponds) for control.

They have a high tolerance to changes in water temperatures and very brackish waters. Its diet is mostly herbivorous.

Tilapia’s diet, in general, tends to be herbivorous, although sometimes it is piscivorous and feeds on small vertebrates, so it can be considered omnivorous.

One of the most outstanding characteristics of the species of the genus is their broad diet and their voracity, so they adapt easily to the concentrated food provided in the rearing ponds.

In fish farming, rations are usually fed according to the body weight of the fry.

The first week they are fed 15% of their weight, distributed in two daily rations.

From that point on, the population density was reduced to 1,100 per m2, initiating a new feeding plan.

Much research is reported on tilapia feeding systems in fish farms.

Even Metwally (2009) conducted experiments with supplemental administration of antioxidant substances, such as garlic, to boost the immune system of O. niloticus species to protect them from disease.

Once the female has been fertilized, she keeps the clutch in her mouth until the eggs hatch, to protect her posture from predators.

This habit, known as mouthbrooding, has become a common spawning technique, collecting eggs from the mouths of females to reduce spawning time from 3 to 4 weeks to only 10 to 12 days.

A female of the species O. mossambicus can produce 1.7 to 2.5 eggs per gram of body weight.

The world’s largest tilapia producers are Asian countries, responsible for 80% of total production.

The largest producer is China, with about 40% of the total, despite the fact that the species was introduced in 1956 from Vietnam and Africa. This is followed by other countries such as Thailand, Indonesia, Philippines, Taiwan.

Most of its production is destined to cover domestic demand, with the exception of Taiwan, which is the world’s largest exporter.

Tilapia meat is consumed in fillet form. Most of the production in the producing countries is destined for the domestic market, and relatively less for export.

As a lean, white-fleshed fish, and competitively priced compared to other fish, it has become the fourth most consumed aquaculture species in a market as large as the United States, after tuna, salmon and shrimp.

However, there are growing reservations about the increase in their consumption, due to the overcrowded conditions in which they are raised in ponds in large factories in some parts, with high doses of antibiotics, hormones and food of suspicious origin, which can cause health problems for consumers.

There is much criticism of production in China, and there is a growing preference for fish raised in shallow, fresh waters, with greater phytosanitary control, as is done in ponds located in the Peruvian and Ecuadorian Amazon.

Atta et al (1997) reported that in tilapia inhabiting polluted waters, the highest contents of heavy metals (cadmium, copper, lead and zinc) are found in the viscera rather than in the flesh, and that cooking their fillets in the oven reduces the content of these metals more than steaming.