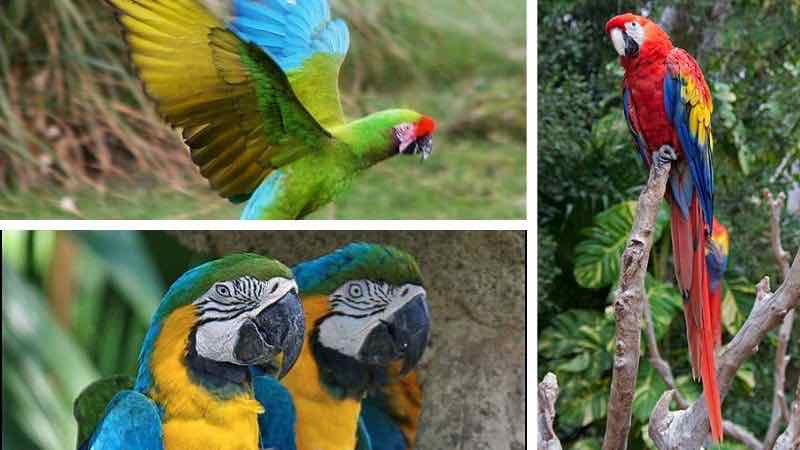 The Common Macaw (Ara sp.) is one of the most characteristic and beautiful birds of the tropical and subtropical zones, belonging to the order of the Psittaciformes, which includes some 372 species grouped in 86 genera.

The name of macaw, macaw or papagayo is generic and designates several species of birds of the Psittacidae family.

Among them, apart from Blue Macaw and the scarlet or red macaw (Ara macao), well known and popular in the world, others such as the red and green macaw (Ara chloroptera), the military macaw (Ara militaris), mostly green plumage, with shades of red and white on the head, and red and blue on the tail.

The parrots are generally concentrated in the colpas, places with saline clays, rich in mineral salts, which they bite and lick.

The Scarlet Macaw (Ara macao, Ara chloroptera) is a beautiful bird that is widely distributed in the Amazon basin.

It is characterized by its powerful beak, its curved upper jaw and short lower jaw, and its multi-colored plumage, with a predominance of scarlet red, along with shades of blue, yellow and green.

The emerald macaw (Ara ararauna), about 90 cm long, with blue plumage on the back and yellow on the chest.

It has strong legs with four toes. Their curved and strong gray beak, longer at the top, works for them to shell, tear bark from treesand fruits.

Some differentiate it from the scarlet macaw, which is larger, 1 meter long, and has red body plumage, with yellow and blue tones on the tail.

They walk in large groups and have the particularity that they are monogamous birds, which remain faithful to their partner.

This group of birds is very important in the neotropical regions, including Mexico, Brazil, Colombia, Ecuador, Peruand Venezuela, and particularly in the areas of the Amazon basin.