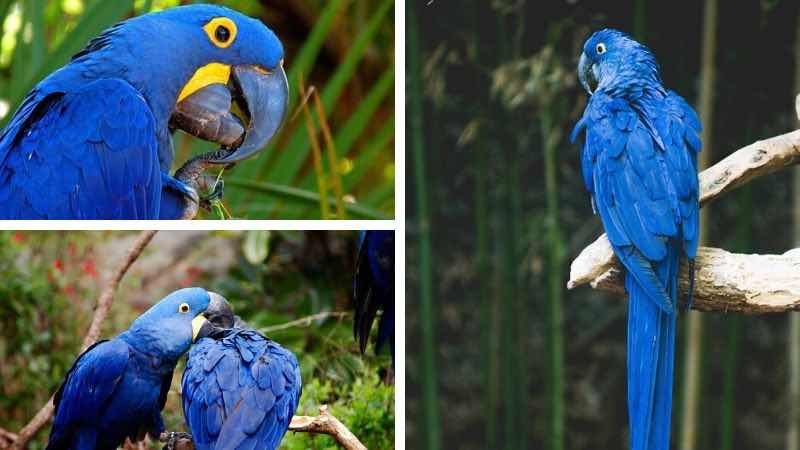 The Hyacinth Macaw(Anodorhychus hyacinthinus), or blue arara, as it is called in Brazil. It is a bird belonging to the family of macaws and parrots (Psittaciforme). It is said to be the largest parrot in the world.

Its average size ranges from 70 to 105 cm long, and it weighs 1.5 to 1.7 kg. Of great beauty with its blue feathers, with black underneath, and the contrast it makes with them, its black beak, curved and pointed, and a yellow stripe at the junction of the beak with the head and around the eyes.

When it opens its mouth, the yellow part moves, making a fold as if it were an accordion. Its beak is very strong, capable of breaking hard seeds.

Where does the Blue Macaw live?

It uses clay, rich in mineral salts, which it collects in some saline areas to neutralize toxins ingested in unripe fruits.

It nests in the hollows of trees, where the female lays two eggs, of which usually only one survives, the first to hatch and focus the mother’s attention, during the first three months.

It reaches sexual maturity at seven or eight years of age.

Overexploited for the beauty of its feathers, and threatened by illegal pet trade, deforestation and forest fires, it had been considered extinct, but reappeared in the jungles of southern Brazil, specifically in the state of Piauí.

It can now be observed in the north and south of the Pantanal, which is located in the states of Mato Grosso and Mato Grosso do Sul.

Behavior of the Hyacinth Macaw

They travel in pairs or in small flocks of up to ten birds. They are monogamous birds.

They nest in trunk cavities, usually of the manduvi tree. The female lays eggs every two years.

It is a bird of exceptional beauty, highly sought after as a pet. Rick Jordan, author of a guide to parrots (2009), says that the blue parrot is a sweet, intelligent pet that adapts quickly to people.

It has the disadvantage of adopting a person as a partner in the house, preventing them from approaching it.