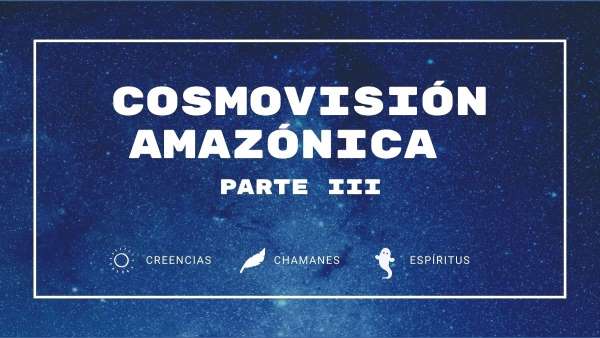 One of the most outstanding characteristics from the perspective of the Amazon worldview is that almost all living beings of the different species, mostly animalsand some plants, are, in general, on the same plane, including human beings.

Descola (2013) calls it “reflective and generalized humanity, in which each species sees itself as human”.

One of them is the human being, who acts in order to correlate the perceptions and actions of beings, as if he were an orchestra conductor, where all the musicians, including the conductor, are part of the same orchestra.

The owners, tutelary gods or spirits of nature

For example, an indigenous person decides to go fishing, probably motivated by a lack of food. But he has to meet some requirements first, such as the one that he must ask the “owner” of the fish for permission and not abuse the extraction of fish above his family or community needs.

That is to say, between nature and the human being there is the mediation of a deity that appears as the “owner” or “lord” of the natural resource.

The thought or worldview corresponds to “a causal chain of mental acts”, which ends with an action and behavior (Díaz 2008).

These mental acts occur in individuals.

As individuals are, in essence, social beings, these acts are expressed at the group or community level, giving rise to a collective process, which is distancing itself from its specific origin, to become more and more abstract or general.

From there are born cognitive models and rules that can be applied in specific cases. These models form a relatively coherent network made up of the mental acts of a collectivity.

This collective network serves society at a certain historical moment to apprehend the universe holistically.

That collective mental act, which we consider a worldview or indigenous thought, is the result of a knot of connections of different elements, including cultural ones, which are transmitted by tradition, and which each individual who is born receives as an inheritance (López-Austin 2012).

The 2 modes of existence of the Amazon worldview

In the Amazon conception there are two modes of existence: the primary mode and the secondary mode.

In the primary mode almost all existing species are virtually human, without any human or animal appearance disappearing.

In the secondary mode, the individuals of each of the animal species consider themselves as if they were “human”, and look at the others as mere animals, including the human being (Mazzoldi 2017).

Animals and some plants have, for the indigenous people of the Peruvian, Colombian, Bolivianand Ecuadorian Amazon, some elements identical to humans, such as psychic compounds similar to those of humans (Vaca-Moras 2008). Although they present some limitations to be able to compare to humans.

The body in the Amazon worldview

One of the most notable limitations is that of the body or, better said, material exteriority (Vacas-Moras 2008). The body acts in these relationships as a taxonomic differentiator and organizer of perspectives (Viveiros de Castro 1996).

In the Amazonian worldview, the body is not a biologically inherited anatomical physiological element, but “a substrate in continuous construction where memory, affections or emotions rest” (Descola 1997).

These attributes that animals and some plants have allow them to develop certain reflective and self-awareness capacities with which they can relate to humans, and which Descola relates to animism.

On the other hand, the body is not only a biologically given element, but a permanent construction that is nourished by social relations.

For the Bari ethnic group, for example, who live on the Colombian-Venezuelan border, the body is made up of a mixture of semen and menstrual blood, and is built through food and pieces of body fluids from their parents, brother and close relatives (Vacas-Moras 2008).

Language in the Amazon worldview

Another limitation is that of language.

However, all animals have specialized communication systems.

Some very developed, as is the case of the dolphin, the manatee, the primates, some birds, the bees (Hillix, Rumbaugh 2004). Derrida (1971, 2008) also presents research on the language of dolphins, primates, birds, manatees, ants, etc., which communicate by emitting pheromones (chemical substances to transmit messages that cause specific behaviors in individuals of the same species) to mark their trail and indicate, for example, a food source.

Or in another way, urinating to demarcate their habitat, in cases of animal “territoriality”. Or scratching and rubbing its body on tree trunks to mark the route.

Marcuso and Viola (2015) point out, for their part, some cases of intelligence in plants.

In the Amazon worldview, the two modes of existence, mentioned above, are always present.

The primary existential mode is the “other world”, the realm of images, where metamorphoses take place, a world of reversible transformations that affect space and time, life and death, and where all the laws that explain reality operate. physical.

Transforming beings with the ability to intervene and influence the secondary mode regardless of time and space dwell in the other or primary world, an area prior to the secondary mode or world (Mazzoldi 2017). In that world, beings are anthropomorphic, vital humans, capable of assuming any form and substance.

The secondary existential mode is the “this world“, the realm of ghosts, where events are governed by time and space.

In this mode or world, the bodies of living beings are of a different nature, a form that will remain fixed. But they can attain other appearances, or embodiments, in the other world.