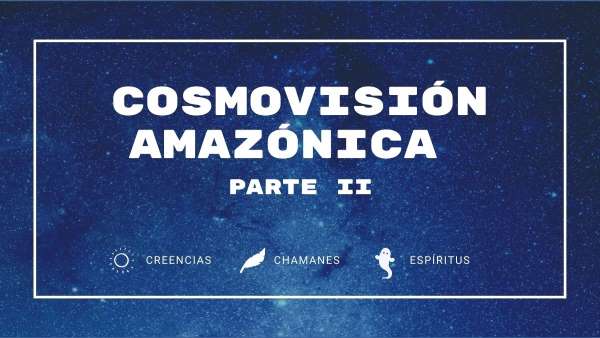 Since ancient times, people, within the social groups they belong to, have asked themselves many transcendental questions about life in general, and about their lives in particular, especially about the purpose or meaning of life. And they have tried to answer them. Such responses form the basis of his worldview or cosmovision, the view of himself, the world and the universe, and the general framework in which the person thinks and acts.

That worldview, generally translated in the form of beliefs, myths and rites, did not initially constitute a rational approach to the world, but rather was a kind of emotional, intuitive knowledge expressed symbolically.

That knowledge was “rationalized” to the extent that it nourished a thought and a behavior, when the person interacted with the concrete world (Restrepo 1998).

The myth constituted a form of incorporation of the sacred or supernatural, the energy of the cosmos, within the framework of culture, seeking to explain the origin and meaning of life.

The rite, for its part, is the way in which man ordered sacred time (Eliade 1991).

But man has not always acted in this way, because to do so he must first have developed his cerebral neocortex, which is the conscious part of the human brain.

The neocortex is responsible for reasoning and performing most of the sensory perceptions. There is also the register of the symbolic.

The evolution of the genus Homo began about 2.3 million years ago, but Homo sapiens about 500,000 years ago, with a larger and more sophisticated tooth structure and brain than its predecessors.

The evolution manifested itself not only in the elaboration of cave paintings and engravings and in the creation and improvement of work, hunting and fishingtools, but also in its social and artistic expressions.

The human being also developed his spirituality, leading him to carry out spiritual practices, framed within what has been called a “natural” religion or proto-religion.

During the Lower Palaeolithic, human beings begin to bury their dead and become interested in the afterlife.

Those changes that are taking place in his anatomy, physiology and brain capacity, were also produced in his environment, and in the way in which the hominid, in the process of becoming “man”, builds an explanation of the world and inserts himself into it. .

That is, man builds his worldview, which allowed him to relate to nature, deities and other members of his community (Restrepo 1998).

What is the neocortex?

The participation of the neocortex is very important in the changes that are taking place in the brain configuration of the human being.

The neocortex is a thin sheet of gray matter, barely a few mm thick, organized in differentiated layers according to the function performed.

There, in the neocortex, perception, thought, judgment and decision take place, as well as the process of managing impulses, emotions and behaviors, necessary for coexistence with individuals of the same species.

Higher mental functions and executive functions are performed in the neocortex.

Executive functions are very important to effectively adapt to the environment and achieve the goals that a person sets for himself (Radnikow, Foldmeyer 2018; Fuster 2014; Vendejo-García, Bechara 2010; Valverde, De Carlos, López 2003).

Along with the neocortex there are two more parts: the paleocortex, which is responsible for olfactory functions, and the archicortex, which is the instinctive or “animal” part of the brain, the most ancient part of the human brain, which appeared millions of years ago in our evolutionary line, which takes care of the basic instincts.

There, in the limbic system, the hippocampus acts, which also regulates some functions of the organism, such as body temperature, sleep, hunger, mood (Guyton, Hall 2011; Kandel, Schwartz, Jessell 2001).

In a worldview, beliefs occupy a very prominent place, since they are responsible for establishing the guidelines of our behavior.

Beliefs are a form of mental representation and correspond to one of the basic components of a person’s conscious thought.

On the other hand, it is known that beliefs precede and guide the behaviors of individuals.

The development of the neocortex is fundamental for the adaptation to social norms and for the fulfillment of the responsibilities that one has within a social organization.

For a belief to be acquired, a mental representation must first occur, and that belief must be evaluated in some way.

This process of representation and evaluation occurs in the medial prefrontal cortex, that is, in the neocortex.

In this way, social and moral values are acquired, long-term goals are established, and one learns to control emotions and behavior (Asp, Ramchandran, Tranel 2012; Muramoto 2004).

In this way, the worldview that guides the group, any group, is configured, and that corresponds, in essence, to an imaginary and collective representation of the functioning of the world, of its creation and its creators, and that is transmitted, from generation to generation. in generation, through myths and is staged through rituals.

A worldview expresses, in essence, an overall vision of the conceptions that man develops about the world he inhabits, and the way in which he inserts himself and orients himself in that world.

But these are not conscious conceptions, products of thought.

They are not born from the pure will to know of the individual, but from the vital activities linked to the experience of his life and closely related to his psychic totality, and to environmental factors (weather, relief, availability of natural resources, etc.) present in the environment where it operates (Dilthey 1954, VIII, 115-119).

For Dilthey, all conceptions of the world have the same structure. A structure that consists of a connection where it is decided about the meaning and the sense of the world.

That connection is, for Dilthey (1954, VIII, 115), the result of three psychic moments that intertwine in the understanding of the universe:

However, it is difficult to understand precisely what exactly constitutes a conception of the world.

…according to Viktor Frankl

The psychoanalyst Viktor Frankl (1973) points out that:

…because there are always some elements that are beyond our control and that we do not fully understand why they occur.

Beliefs are largely responsible for the worldview that a social group has built over time, and that is transmitted intergenerationally.

Until a few years ago, it was believed that our life was determined by an equal interaction between the influence of genes and the environment, and that both factors were equally responsible for the beliefs and personality of individuals.

That was until recently the great debate between nature (nature) and nurture (nurture), that is, between genetic factors (innate) and acquired factors (derived from individual experience and the environment).

Much more is now known.

Genetics (genes, DNA), according to Natham Gillespie, of the Queensland Medical Research Institute, Australia (El País, Madrid, 10.27.2001), can be responsible for 60% of an individual’s personality, but the environment or The environment is essential for genes to express themselves.

As said by Dr. Cori Bargmann, a researcher at Rockefeller University, at the European Federation of Neuroscience Societies Congress in July 2012:

A living being tends to free itself from the uncertainty of the rest of the world, reacting to fluctuations in the environment.

This ability to respond and adapt, which produces changes in character, is known as phenotypic plasticity(Wagensberg 2000; Nijhout 2004; Andrade 2005).

The environment can be shared (family and social coexistence) or not shared (what comes from individual experiences, which make the difference between one subject and the others).

This environment is a repository of information, which can become part of the internal world of mental representations of a person.

Living beings are encoders of information that, when accepted, become habits (Andrade 2005).

Epigenetics, which studies the interactions between genes and the environment, goes even further, postulating that genes do not totally control our biology.

It is the environmental cues and our perceptions of those cues (“what we think about what happens to us”) that determine our cellular behavior and the way our genes express themselves.

The nervous system is the mediator between environmental signals and cell behavior, regulating our biological mechanisms with the release of biochemical substances.

But -beliefs return-, it is the beliefs, lodged in our unconscious mind, that modify our perception.

This perception of what happens to us is essential for the mind to decide how to act.

In such a way that our perception, and the way our mind interprets it, is at the origin of our belief system that, in the first instance, generates thoughts and behaviors, and builds our worldview.

If the belief changes, the perception, the thoughts and the neurochemical responses of our body also change.

That is, if the mind believes, the body “believes” too, because mind and body form a psychosomatic unit.

This aspect is important to understand the action of a shaman and his healing role, which acts, at the same time, on the mind (the “spirit”) and the body.

That is to say, it acts on the physiological manifestation of the disease and on its very root, a belief or representation lodged in his mind as a belief.