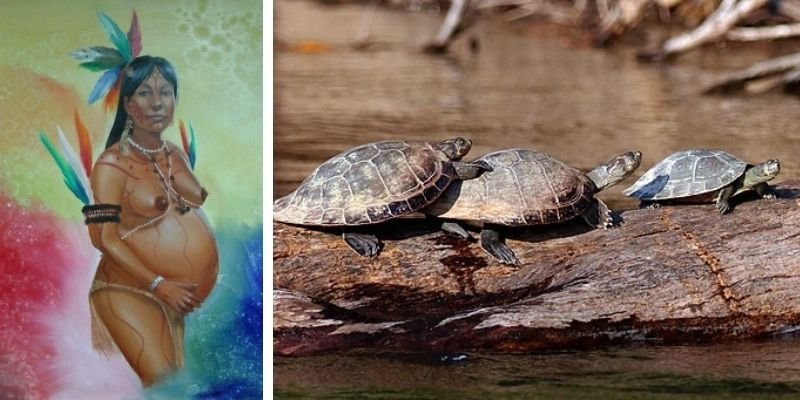 An old woman named Choima was married to a healer or shaman, whom she wanted to resemble.

To become a healer, she began to ingest tobacco, as witches do.

Then he went to the river.

There was a pregnant woman there who said to him:

“Paisana, what are you doing here, sleeping by the river?”

“I want to be a tobacconist and be able to become something”.

So, on the beach they dug a hole for the woman to have her child.

But the woman, instead of a child, gave birth to eggs.

Choima, not knowing whether she was asleep or awake, went home.

When she arrived, her husband, the tobacco sorcerer, reproached her for the abuse:

“What did you do with my tobacco? I told you not to take it. You got engaged to a pregnant woman, and now you will own that woman called charaapa.”

And he cursed her.

Choima accepted the punishment, and now owns the charapa and the charaapashi plant, which is used to hunt the charapa.

Since then, the charapa turtle must dig a hole with its hind legs to lay about 150 eggs.

There they are incubated by the sun for about 45 days.

As each egg contains the genes of both sexes, the final sex of the hatchlings will depend on the temperature of the hatching hole or incubation chamber.

The eggs above, more exposed to the sun, will be females.

Those below, colder, will be males.

At hatching, the hatchlings remain there for another 30 days, feeding on the proteins in their yolk sac while their shells harden.

On a rainy and cool night, they leave the hole and jump into the river, amidst the voracity of predators of all kinds, especially birds.

Some indigenous groups, such as the Shipibo-Conibo, collect turtles and their eggs at the end of the emptying season.

They kill some for their meat, crush some eggs for fat, and take other turtles alive to raise them in their villages.

The festival of Uyantza Raymi, the festival of nature (the living forest, or Kawsak Sacha). Preparations and details of this celebration