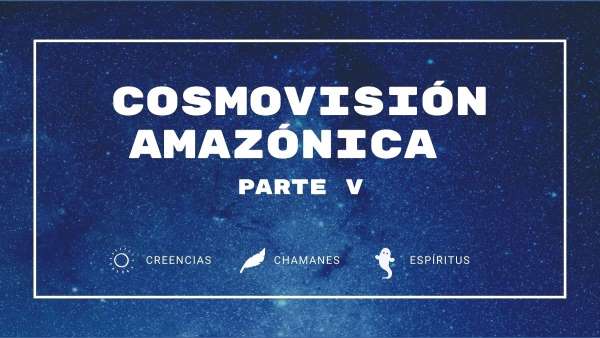 The Ticuna, inhabitants of the border areas of Peru, Colombia and Brazil, believe that the universe is made up of beings in continuous interaction, regardless of their appearance, human or not, visible or not.

The being, as a “body of affections”, is linked to its environment as an “organic body” managed by the cosmos.

Each being is managed by two principles: the bodily principle, acquired at birth and built up from elements of the environment. And the vital one, which is gradually built up to maturity when adulthood is reached.

This construction is aided by rituals, dances and drinking masato (a fermented drink made from sweet yucca ), until the vital principle is acquired. Plants, animals and humans have the same characteristics. Plants and animals are human beings who have been dispossessed of their physical appearance (Goulard 2009: 183-184).

The Yagua, of the lowland jungle, inhabitants of the lower course of the Amazon River, and distributed in Peru, Colombia and Brazil, believe that the cosmic balance rests on the maintenance and circulation of a liquid energetic potential, restricted and diluted within the biosphere, in a closed circuit. This idea is shared by other indigenous societies in the northwestern Amazon.

This conception of the universe, in dynamic equilibrium, is reminiscent of the mechanism of the human body determined by organic fluids (such as blood, semen, saliva, milk, humors).

Cosmic energy, indispensable for life, comes from the sun. Energy, as a fertilizing force, goes subway, and is brought to the surface by the roots of plants and stored as a reserve in vegetables.

The energy is then passed on to animals and humans as they are consumed for food. The ritual of ayahuasca ingestion materializes the visual contact with the jungle spirits, especially with the plants, which possess the knowledge and powers of the shaman (Chaumeil 1994: 267-274; Olortegui-Sáenz 2007).

The Candoshi, who live in the Loreto region, do not differentiate between animality and humanity. Both animals and plants participate in the rules of social organization, just as humans do.

The cosmos is related to the totality of the environment, and all beings act in the cosmos with body and soul. That is why Surrallés (2007: 267-268) calls it “perspectival animism”.

In the rituals they sing, dance and eat fermented masato, after having “purged” themselves by drinking an infusion of guayusa (Ilex sp.).

The Awajún, who live mostly in the upper reaches of the Marañón and Mayo rivers, distinguish between male and female spirits, the basis of the social division of labor and the allocation of productive tasks.

The Nugkui deity teaches the women to cultivate the plants and take care of the farm and to make clay pots.

The deity Eitsá teaches men to hunt, fish, cut trees and to choose and prepare the site to establish the farm.

Bikut, a mythical warrior, transformed into a toe or floripond (Brugmansia suaveolens) a hallucinogenic plant, transfers wisdom to them.

Yúka, a talisman to go out hunting

The animals of the forest(mammals and birds) and of the river ( fish and turtles) carry inside their belly the yúka, a talisman that gives its owner the power to attract wildlife, favoring their capture.

The power of the talisman is lost if the hunter had sexual relations before going hunting.

Women, before planting, offer chants and other rituals to the nugkui anen to increase the production of the plants in the chacra (Seitz-Lozada 2007: 125-127).

The Yanesha, who live mainly in the high jungle in Junín, consider earth, water and fire as the primordial and sacred elements. The earth, the axis of human existence, is mother nature.

Water is the source of life, and rivers are sacred. Fire is the purifying element of the spirit (Manligano-Antonio 2002). For Santos-Granero (2004: 165 and 221), the yanesha relate to the environment, considering it a living and personalized entity, composed of a myriad of interconnected living beings: plants, animals, minerals, natural phenomena.

With them, the yanesha share the same essence: the breath of life, the portion of divine soul given to them by the Creator.

The Asháninka, who live in the basin of several rivers (Perené, Satipo, Apurimac, Ene, Pichis, Pachitea, Urubamba and Ucayali) and the Gran Pajonal plateau, consider the world to be populated by gods and demigods.

Animals were initially human beings and there was divinity in them. Every living being, plant or animal, has a spirit that is related to a myth or a legend.

Each species has a tutelary deity, or owner, mostly female.

The owner, or ashitari, is the intermediary between humans and nature, and transmits the rules of use of the species he represents, without which the general order of human-nature relations would be lost (Macera, Casanto 2011:75).

Such representations give cultivated plants, forest animals and fish a social status.

For the Cashinahua, who live on the banks of the Purús and Yurua rivers and their tributaries in the Ucayali, all living beings (humans, plants and animals) and the inanimate elements of nature possess a spirit.

Of things, such as the sun, water, wind, one learns through the sensations that these phenomena produce on the surface of the body, as a sort of dermal knowledge.

To see the true nature of people and things, the “spirit of the eye”, which lives in the eye, is used.

It is the ocular knowledge. The eye leaves the body in moments of unconsciousness or hallucinogenic experience, to travel to the spirit world.

Another is auditory awareness. A wise man is one who masters this knowledge. But wisdom must be reflected in the behavior of the one who possesses it (Kissinger 1998: 97-101).

For the Bora, who live in tributaries of the Putumayo River in Colombia and Peru, the universe is divided into three worlds: the world of the Creator, píívyeji niimúhe, or world of the Beyond; the world in which we live, populated by people, plants, animals and good and bad spirits, and the lower world, where the holy grandmothers dwell, who protect us from illnesses.

For the Bora, nature is cared for by spiritual beings who act as “owners”.

One of them is iámé niimúhe, guardian of the animals.

They are asked for permission to hunt them, through ampiri (essence of tobacco and salt from the forest), coca, cahuana (drink made with yucca flour).

Another guardian is bájúne mééi, father of the forest, responsible for fruit trees and medicinal plants.

O pijkyané núbba, the sun, which allows the chakras to develop.

O májchotawa núbba, the moon, who takes care of the plants during the night, protecting them from evil.

O uméko wájya, a beast that devours people who break the rules, in association withtujpawa, the red rainbow, in charge of revenge.

Dórame bóóa is the black boa, which lives at the bottom of the water and is responsible for fish and all other animals in the water.

And many other spiritual beings more.

For the Bora, nature communicates with man through its messengers.