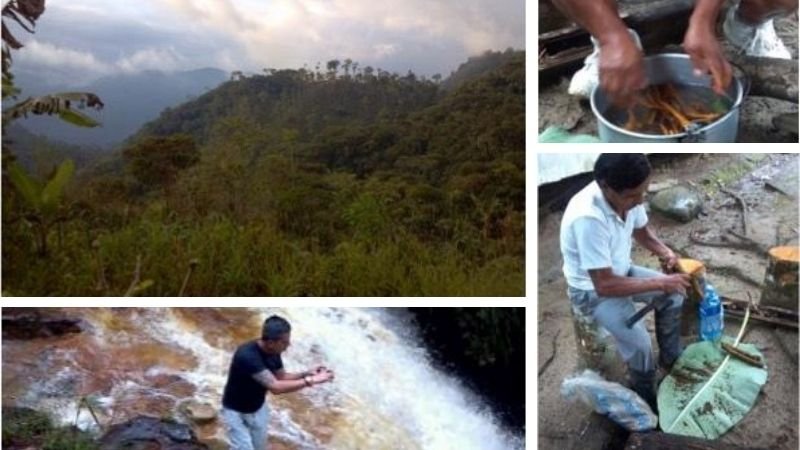 When I went to the jungle, I expected a vision. I wanted ayahuascato show me what was going to happen in the world. How do I take care of myself – can I protect myself? What is my role in this process? Should I learn permaculture and sustainability, maybe buy a small place in Ecuadorwith goats and chickens and a big organic garden? Or should I continue to keep my possessions to a minimum so I can travel light, be flexible?

It is a month since we sat around the fire in the damp dark, drank ayahuasca that had bubbled all day, purged thoroughly, and eventually slept — without a vision for any of us three. Not Ron, my beloved skeptic, who the next morning said “I’m a child of the ‘60’s! It’s happened before,” and shrugged. Not Ken, who like Ron and me is an old hippie peacenik. And not me, a Boomer chick currently cleaning my inner house of cobwebby thinking and desiccated perceptions about being 70.

Disappointed, we talked about it around the fire the next morning with our tour guides and the Shuarman who had assisted the shaman. He shook his head, genuinely puzzled. “Pay attention. Something may yet come.”

Back home in Cuenca, a hot shower and a soft bed felt heavenly for my body, but much of me was still back in the jungle.

As the days passed, Ayahuasca continued to make Herself felt, often stronger than during the ceremony. Ron reported the same experience. “She’s talking to me all the time! She told me specifically some things not to do. Believe me, I won’t.”

The week following our return from the jungle, I slept a lot – when I wasn’t writing. I couldn’t stop writing. The current of thoughts streamed through my head like rainwater rushing down the creek and over the falls, demanding to be recorded. I wrote, edited and re-edited the story of our journey to share with my critique group, curious how they would respond. Upon seeing the title of my piece, one woman announced that she had the same experience – twice. Another, whose eyes widened when I handed her a copy, said that this was pure synchronicity – those beneficial coincidences named by Carl Jung that confirm that we’re in a divinely ordained process – and we needed to talk.

An email from a friend introduced me to a gentleman who had taken ayahuasca three times without a vision. He said he felt like a spiritual failure but was going for a fourth time, not for a vision but for the purging itself as a form of initiation.

That evening something happened. My man and I made sweet love for the first time since the pilgrimage. Others have also documented that the “small death” of orgasm opens the psyche to other dimensions but I didn’t remember this until much later. Afterwards he tucked me in, kissed me, and went to the other room to read. I lay in post-coital contentment, suffused with gratitude, watching the movies in my mind. One particular scene began to pulse with energy, then pulled me into it.

The jaguar (Panthera onca) is the largest feline in the Americas and the third largest in the world, after the Asian tiger and the African lion. Read more…

I run along the trail, at home in the rainforest. My big black paws reach for the path ahead, my haunches launch me into the next stride. I leap up a fallen tree lying at an angle across the path, claws and muscles carrying me easily upward, where I pause to survey the jungle. I recognize a million scents around me.

I look up and the sky is filled with thick, sensuous coils of energy, a serpentine dance of personality and power watching me, a big black cat running through the jungle. I feel the energy of attention, including communion, satisfaction and pride, and for some fractal of time I am split, being both cat and serpent. Then I am in the sky, looking down on the green expanse below. For fractions of seconds the gateway to timelessness holds me. And then it stops and I am lying in bed watching the pictures in my mind, ordinary images that don’t throb and pulse with meaning.

What just happened? I recall the living image and feel the energy pulse, moving inside me, building again as I acknowledge it.

Whatever time passed was minimal, which didn’t matter one way or another, since I had visited No-Time.

It wasn’t the kind of vision that consumes you, carries you kicking and screaming into another reality. It was subtle and showed itself only after I focused my attention on it…as is so often the way in shamanic work. My volition and intention are integral to the process.

I have drawn my conclusions. You draw your own. What I know for sure is that I am now in a relationship with the sacred vine that is propelling me headlong into my passions.

My entire sense of myself has been disassembled. Something fierce and free has been set loose in me and is stalking my universe(s) – both inner and outer – something both feline and serpentine, both beautiful and terrifying. How can this be? How will what has happened affect my life?