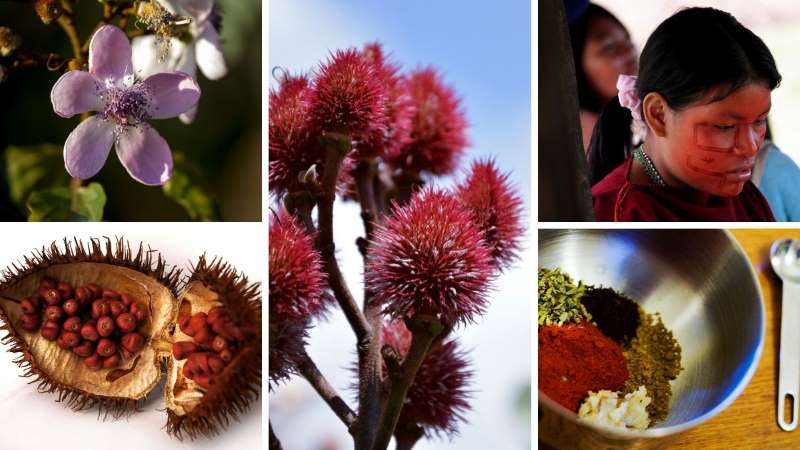 In addition to being used as a colorant both in the preparation of typical dishes and in indigenous rituals, it is also one of the most popular medicinal plants in the Amazon region.

✅ Description of the achiote plant

It is a perennial plant with heart-shaped leaves, ephemeral pink or white flowers, and prickly ovoid fruit.

The fruit has different colors ranging from green through yellowish tones to red when ripe. Inside it has triangular shaped seeds, with red pigmentation on the skin, which are expelled when the fruit reaches maturity.

Each capsule of the fruit can contain between 30 and 45 seeds.

The achiote or onoto bush is fast growing, reaching an average of 4 to 6 meters in height, and is quite robust in appearance.

✅ Other names of achiote or onoto

Etymology of the word achiote

The word achiote comes from the Nahuatl (Aztec) language, which translates as seed of fire or seed that shines.

Its scientific name Bixa orellana derives from the last name of the explorer Francisco de Orellana.

Origin of the name Rocou

In the days of the Spanish colonization in America, the seeds of the achiote or annatto were brought to Europe by the French explorer Rochefort around the year 1659.

They called it Rocou back then and used it to dye a variety of products ranging from textiles to food.

✅ Pre-Hispanic use of achiote

Although today it is used daily in different parts of the world and is part of the global gastronomic culture, the native indigenous people of America used achiote, annato, onoto or bija widely before the arrival of the Spanish colonizers.

In the Spanish chronicles is recorded the application of achiote among the Mayans, who enjoyed consuming it and mixing it with cocoa.

In the archaeological site of Caral, located in the city of Casma, Peru, evidence has been found of the use of achiote or onoto as a narcotic. The inhabitants of the pre-Inca Caral culture (considered the oldest in America) prepared a mixture that included achiote, lime and coca from around 3000 years BC.

For their part, the Incas of upper Peru used achiote leaves long before the conquest as a powerful natural medicine for the treatment and cure of different ailments or diseases.

Achiote brings with it a variety of incredible properties, not only in the gastronomic field but also as health benefits; in addition, it includes a series of nutrients that positively act in our organisms.

The nutritional contribution of achiote can be measured, for example, in a fraction of 100 grams, providing a portion of proteins, fats, carbohydrates and fiber; and it is considered an important source of vitamin A and carotenoids, which are regulators of blood sugar levels. Likewise, it acts as an anti-inflammatory and healing agent.

It is rich in calcium, which, among other uses, keeps bones healthy.

From a therapeutic perspective, it is used as an expectorant and fluidizer in respiratory processes, given its anti-inflammatory and antimicrobial content; therefore, it is considered essential for the natural treatment of flu, cough and other symptoms of the respiratory tract.

Also, it has astringent properties, as evidenced in its cosmetic uses to improve the appearance of the skin as an exfoliant and moisturizer.

It also provides a large amount of antioxidants and has been attributed preventive anti-cancer properties in the liver, prostate and oropharyngeal area.

It also has properties related to the prevention of diabetes.

Additionally, since ancient times, aphrodisiac properties have been attributed to it, as a powerful libido stimulant for both men and women.

The achiote seeds are commonly used in the kitchen, not only for their pigmenting properties that provide a pleasant coloration to most foods, but also for their good flavor that enhances the most demanding culinary preparations.

Particularly in cooking, achiote is part of the culinary avant-garde in the context of South America, Central America and other latitudes, being used as a coloring additive for different and grandiose preparations and recipes.

Currently, processed onoto is sold in different presentations such as:

Today, in the Latin American context, its use is extremely common in kitchens from the humblest to the large tourist centers and world-famous restaurants.

Also, it is combined with different dairy derivatives such as cheeses, like cheddar and munster cheese, as well as in margarines and butters.

On the other hand, it is used in a variety of traditional stews, fish and smoked meat, and is also used in traditional techniques for smoking and cooking food underground, mainly meat and seafood.

A widely known example is the preparation of pibil dishes (derived from the Mayan word pib), which consists of a dish where the meat is seasoned with achiote and is cooked underground, wrapped in banana leaves. An example is La cochinita Pibil, a dish of Mexican gastronomy that is widely spread internationally.

A typical dish from the Amazon is the fish and capybara pisillo .

Likewise, it is used in a variety of rice-based dishes, such as rice with meat and rice with seafood since, no doubt, it is a much cheaper spice than saffron, which is also used for coloring and seasoning food.

Indeed, the bollitos pelones are another dish where the achiote is the protagonist, where it is used in its ground form to give flavor and color to the meat, which is then used to fill buns made of precooked or fresh corn flour and then cooked in chicken or chicken broth (also seasoned and colored with achiote).

Other preparations in which it is used correspond to fried arepitas with pork rinds and achiote or onoto.

In the gastronomy of the east of Venezuela they use the onoto in oriental curd. The Orientals add the pigment to this type of fish cake to give color, firstly to the base stew, and secondly to the cover.

Additionally, it is traditionally used for the famous Venezuelan hallacas or hayacas, as well as the tamales of Colombia, Peru, and Ecuador; the dough in which the meat is wrapped is seasoned with achiote, giving it its characteristic yellow coloration.

In this same context, achiote also has a special role in the preparation of:

Other delicious and emblematic recipes exist throughout the American territory, which have great cultural value and guarantee the survival of achiote over time for a long time.

In addition to this, in contemporary Colombian cuisine as well as in Venezuelan cuisine, bija or achiote is used in countless dishes and preparations such as sancochos, stews, tamales, rice, and sausages, among others. On the Caribbean coast, it is an essential ingredient for local dishes.

In Latin America, achiote, bija, onoto or annato represents one of the critical ingredients in different local preparations, as is the case of the Venezuelan hallaca, the Mexican cochinita pibil, and the Peruvian polloda and locro.

As discussed above, achiote is not only a spice for cooking, but also has important properties in the area of health, since it is considered useful in the treatment of various conditions and diseases.

In this sense, achiote for medicinal purposes can be consumed in various ways, such as:

⚠️ Side effects and contraindications ⚠️

There are some contraindications and adverse reactions that are associated with the misuse of achiote, which must be considered in order to avoid unwanted effects.

For example, excessive consumption by pregnant women is contraindicated because it has abortifacient properties .

In the same way, those who are close to undergoing some type of surgery or operation should refrain from consuming achiote, since blood glucose levels could be compromised.

People who are allergic to achiote may present hives, dermatitis and, in severe cases, anaphylactic shock.

✅ How to grow achiote?

As mentioned, achiote is a spice usually adapted to tropical climates and warm regions and its flowering and maturation periods are variable depending on the characteristics of the areas where it is cultivated.

During planting, the achiote seed must be covered with a thin layer of soil and compost, and the soil must be kept moist.

The seeds will germinate, on average, in four to six weeks.

After about three years the plant will bear fruit to extract its magnificent seed.

✅ Achiote in the indigenous culture of the Amazon

At the time of the Spanish colonization and evangelization in America, its use was prohibited because achiote was considered a pagan element associated with the magic and mystical beliefs of the indigenous people. For the evangelizers, achiote was a heresy and therefore its use, cultivation and propagation should be prohibited.

The indigenous people used the achiote pigment as a protector on their bare skins, or as an adjuvant against the inclement environmental and wild conditions in many of the territories they occupied.

With its use, they more successfully managed life in the jungle, since they knew that this plant was an efficient healer of cuts, scratches, wounds, and an excellent mosquito repellent.

The achiote applied to the body was also associated with a link between an earthly and spiritual state.

They did not consider it as a simple seed or bush, but as a relevant pigment for religious and mystical rituals.

That is to say, it was a seed and therefore a sacred tree granted by the gods themselves as the essence of plant blood, which endowed them with wisdom, health and a perfect balance between the earthly and magical.

For Ulloa (1992), this image was related to one of the most important manifestations of indigenous culture.

It was used in traditional dances, parties, and was connected to the social role, also being used as a seduction tool and to fall in love.

In the Colombian, Brazilian and Ecuadorian Amazon, this tradition has survived in history as intangible heritage.

The achiote does not escape mysticism and is itself the subject of indigenous legends that in turn constitute a communicative element for the natives of the Amazon.

▷ The arrowhead cured by the achiote

Among these legendary stories is the legend of the arrow shooter, which tells the story of a hunter who did not hunt out of hunger but out of ambition.

One day, because he discarded the prey of his hunt, the gods cooked his mouth.

His wise grandfather, observing that he was dying of hunger, decided to cure him with achiote on the condition that when he hunted he would do it out of hunger and not out of ambition. The achiote cured him and he kept his promise.

▷ Buynama or the man of water

The legend of Buynama or the man of water explains that human beings are born from the seeds of the achiote bush and through these they have populated the earth.

For Castillo & Uhía (2009), it is emphasized that when the first achiote seeds were planted on earth, human beings began to appear and the gods wondered who would have been responsible for this.

▷ The guardians of the jungle

Another legend is that of the Achiote and the Huito, which according to Flores (2010), tells the story of two beautiful women who traveled through the jungle looking for a boyfriend. In their adventure they met a captivating character, but an evil hunter caught them to make them his wives.

After being deceived, they asked the spirit of the jungle to turn them into useful plants, and the great spirit agreed to transform them. He turned one with reddish hair into the shape of an achiote tree, and another, with black hair, into a Wituk tree.

Both plants still exist in the Amazon. As time passed and thanks to a rainbow, two young women with exceptional beauty appeared in the Amazon and were considered the guardians of the jungle.