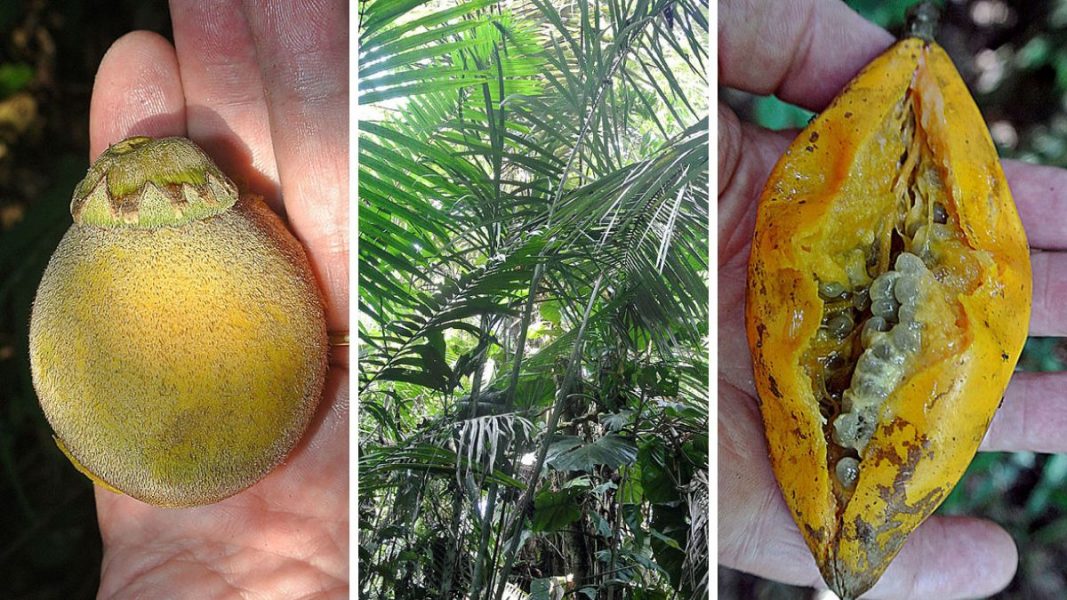 The chambira (Astrocaryum chambira Burret) is one of the species of palms most important for the Amazonian indigenous communitiesIt is an edible fruit and fibers that have been used ancestrally for the elaboration of products for daily life (hammocks, backpacks, fishing nets, among others), also having great acceptance in craft stores and tourists for its great sociocultural value, being also a source of income.

Botanical description of the chambira plant and fruit

The chambira is a solitary palm that can reach a height of up to 22 meters approximately, whose trunk and leaves are populated with large flat black thorns up to 20 cm long in the internodes, which makes access to the plant difficult.

The leaves form a crown of 9 to 16 erect leaves, five or more meters long each, with a petiole and rachis covered with yellowish spines.

Nutritional composition of the fruit

The use of chambira is handmade, due to its resistance, flexibility and durability.

From the tender leaves the fiber is extracted to make hammocks whose motifs vary according to the clans, as well as bags or shicras, necklaces, dresses, cords, ropes, mats, nets, among others.

The trunk is used as firewood and construction material. The fruits of the chambira are eaten in Amazonian cities, and a kernel is extracted with a flavor similar to coconut (Montero, n.d.) (3).

The seeds of the fruits are edible and some indigenous communities use some of the remains of the leaves -after removing the fiber- to make brooms (Patiño, cited by Gallego, 2005) (1).

Likewise, in Brazil, the ripe fruits are used as a treatment to eliminate parasites and also to treat erysipelas; in Peru, the steam from the decoction of the leaves is used to alleviate rheumatism.

The Cofan Indians of the Ecuadorian Amazon drink the water contained in the fruit to prevent measles.

The Huaorani Indians of Ecuador consume the tender buds of the chambira (Montero, n.d.) (3).

Chambira weaving and its sociocultural value

Astrocaryum chambira is the most important vegetable fiber producing species in the western Amazon, highlighting that the Siona, Bora, Quichua, Waorani, Cofán, Secoya and Chácabo, are among the main indigenous ethnic groups where its use is rooted (Wipio, 2018) (4).

According to historical documentation, it is possible to affirm that the Chambira has been used in the making of hammocks since the 17th century in Caquetá and Ucayali (Patiño, cited by Gallego, 2005) (1).

Currently, products made from this fiber are used for own consumption and are also traded in regional, national and international markets, mainly in Peru, Colombia and Ecuador (Wipio, 2018) (4).

It is important to highlight that the chambira also has a family, commercial and socializing meaning, given that this fiber is the raw material of the weavings of many Amazonian indigenous communities and of an ancestral knowledge transmitted from generation to generation, extending links between the past and the present.

According to Gallego (2005) (1), the chambira has been present throughout history, in various stages of the life of the Amazonian indigenous people, from birth to death. In some of these communities, when a child was born, the umbilical cord was tied with two knots of chambira fiber.

In addition, from a very early age, indigenous women They learn to twist the chambira guided by their mothers, and when their first menstruation arrives, they traditionally spend a month of confinement working this fiber, also testing their creativity, as a demonstration of an industrious woman, who will be a good wife and mother; she must also listen to her mother’s advice on how to behave in this new stage of life, preparing for married and family life.

Likewise, according to Fejos, quoted by Gallego, the day after the marriage, the wife began to weave hammocks for herself and her husband, which were examined by the women of the husband’s clan, evaluating their skill and earning the respect and admiration of all.

The collection of chambira is generally done between spouses, especially when going to the chagra, or at any time if there is an assignment. Upon death, the person was wrapped in the hammock he or she had used in life and in other hammocks in the community.

In the past and present, the chambira has great importance in the social relations between the members of the indigenous communities of the Amazon.