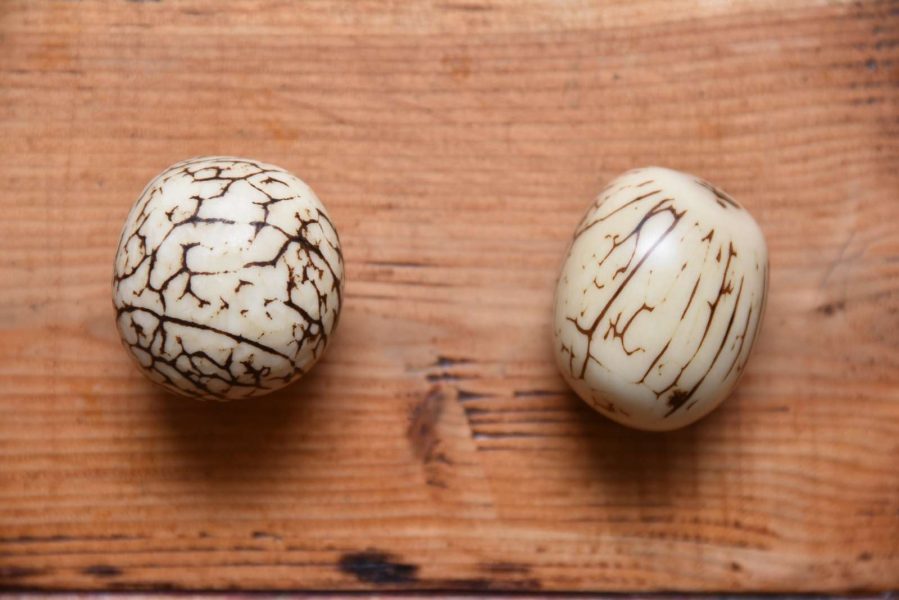 The tagua nut or vegetable ivory is also known as mococha, corozo, , yarina, chapi, cadi or cachu. These are some common local names for the palm-trees and seeds of various species of palms of the genus Phytelephas (Phytelephas macrocarpa; Phytelephas seemannii and Phytelephas aequatorialis) that grow wild and sometimes as a commercial crop in tropical forests, mainly in the Ecuadorian coast and Amazon Jungle.

Tagua is found in the thick tropical and humid forests of Ecuador, Colombia, Peru, Brazil and Panama (Pueblos originarios, n.d.) (7).

Other names given to the tagua nut in Amazonia

Description of the plant

Tagua is a solitary, uncultivated palm-tree that grows in forests called “taguales”. This palm with a woody trunk can reach up to 20 meters in height and takes between fourteen and fifteen years -from the time it is planted- to bear fruit; subsequently, the plant offers approximately three harvests per year (Pérez, et. al, 2017) (5).

Its original populations have been reduced, given the transformation of forests into crops, therefore it can be said that the tagua has been reduced to a small number of individuals. It is currently an endangered species. In addition, in view of the new demands for tagua products, it is necessary to develop a model for the conservation, production and sustainable management of vegetable ivory (PUCE, March 2, 2022) (7).

Description of fruit and seeds

The fruits of the tagua are large and almost round, flattened globular, brown or black in color. Botanically, they are drupaceous berries (when ripe), with a thick and fibrous rind; they enclose a variable number of locular cavities containing the seeds (two or more in each locule).

According to Artesanías de Colombia (2014)(2), the seeds of the eponymous palm should be stored and protected from the sun for six months prior to use, in order to ensure that they reach their “optimum point” after maturity. The first artisans elaborated various objects with tagua, leaving them in their natural ivory color, but later they began to use new techniques, dyes and polishing tools.

Uses of the tagua-nut and its socioeconomic value

Vegetable ivory is a non-timber forest product of great socioeconomic importance, mainly in Ecuador – in the subtropical zone of the Andean mountain range, the coasts of Manabí and Santa Elena – which is the world’s largest exporter.

The commercialization of the tagua seed button began in the middle of the 19th century in the international market, with a great acceptance until shortly after the Second World War, since the advance of technology and the development of new materials with low production costs, such as plastic, led to a decrease in the demand for this product (Andrade, 2020) (1).

Nevertheless, the Ecuadorian tagua (Phytelephas aequatorialis) continues to be exported to countries such as China, Hong Kong, Turkey, Singapore, Spain and Italy, among others, mainly in the form of handicrafts and buttons for haute couture; famous international fashion firms use Ecuadorian tagua buttons (considered of very high quality) in their garments, among them Dolce & Gabanna, Carolina Herrera, Dior, Gucci, Prada and Armani. Another relatively recent international use of vegetable ivory is in the form of an exfoliating powder in the cosmetics industry. Additionally, tagua generates multiple ecosystem services such as crop pollination and moisture retention, among others (PUCE, March 2, 2022)(6).

Various handicrafts are made from tagua, such as ornaments or decorative artistic figures, such as couture buttons, chess and animal miniatures, spinning tops, cup holders, key chains, pen holders, bottle caps for liquors, candlesticks, pendants, among others; costume jewelry is also made, such as pendants, earrings, rings, necklaces and bracelets.

On the other hand, the leaves of the tagua are used for the roofs of the houses and the stem for the manufacture of floors; the shoots are used to make brooms. The fruit is an ingredient of the local gastronomy (occasional consumption of sal prieta, jam, marmalade, ice cream, beverages); they are also a source of quality vegetable oil. Tagua flour is destined for animal feed (cattle, pigs and poultry). The roots of Yarina (Phytelephasmacrocarpa) are used to relieve kidney pain (IIAP, 2008)(3).

The Waorani Indians extract a fiber from this palm to make torches, clean blowpipes and light fires; they use the wood from the stems to make arrows and the tagua leaves to make baskets. They also use the fruit for the treatment of stomach pains and diarrhea (Sanchez, January 21, 2022)(8).