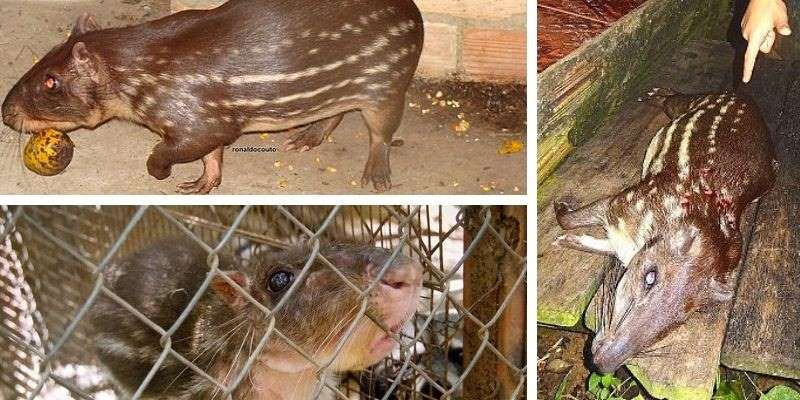 The Lowland Paca (Agouti paca, Cuniculus paca) It is a large wild rodent, the second largest rodent in the jungle, after the capybara (Hydrochaeris hydrochaeris).

When I was studying in Mexico, I found out, reading a 17th century Spanish chronicler, of the existence of a dog with little hair that did not bark. The chronicler called him “can non latrabili” It was the Lowland Paca (Agouti paca, Cuniculus paca) , better known in Mexico as Tepezcuintle

Meaning of the word tepezcuintle

For a long time I spoke in wonder of that dog, until I discovered that the tepezcuintle (from the Nahuatl, tepetl, mountain, and from the tecuintle, dog), was not a dog, but a rodent, which was found in many parts of America.

Other common names of the species Cuniculus paca

It is a rodent with an elongated body and no tail, which measures between 60 and 80 cm long and weighs up to 12 kilos.

The majáz’scoat is short, brown, with whitish spots on the back and yellowish white on the abdomen.

The pacalikes to go out at night, live near rivers and live inside burrows, which it often steals from armadillos.

The pacameat is highly appreciated, rich in protein, and with a pleasant flavor reminiscent of chicken and pork.

Children sometimes turn the painted jochi into docile pets and call them chunchos, just as they derogatorily called the Amazonian Indians.

And, like them, they are subjected to a constant threat to eliminate them.

These rodents, known in some countries of the Amazon basin as lapas, have great abilities to swim when they are chased by their predators.

The also called picuro, is a nervous, scary and harmless animal that adapts easily to captivity.

What does the paca eat?

It feeds on fruits and the fruitsof palm trees and acts as a great seed disperser.

It has been heavily hunted for its edible meat and its valuable skin, which is exported for making bags, suitcases and belts.

The indigenous people also hunt it because it causes enormous damage to the farms, especially in the yucca fields.

The majásgall, dried, is considered a powerful antidote against the bite of poisonous snakes.

For this reason, the mitayeros and fisgueros carry it with them to drink it, dissolved in water, in case they are bitten by snakes.

Bile (or gall) is a yellowish secretion secreted by the liverof many animals, fulfilling digestive functions.

Given the evident overexploitation of these rodents from the Amazon, measures have been taken to protect the species, such as carrying out breeding experiences, with majás or tepezcuintle and peccary, in zoocriaderos in the Loreto region since the end of the 1990s, with very good results. results.

The picuro or lapawas, at least until the 1960s, an important food source in the Peruvian Amazon.

In 1967 its consumption represented between 13 and 17% of the diet of the inhabitants of Loreto. They call it guanta (ECU), guagua, lapa (COL), painted jochi (BOL), lapa (VEN), paca (BRA)